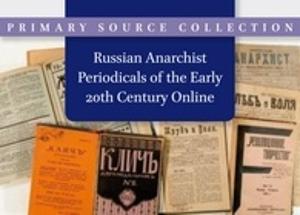 This collection reveals the eventful history of Russia during the revolutionary era, from the perspective of metropolitan and provincial newspapers and journals published by the most radical political forces. These materials shed new light on the relationship of the anarchists with the Bolsheviks and the Soviet State, and reveal the impact of anarchist ideas on the literature and art of the period.

Anarchism and the Russian Revolution
Anarchists - being a small but highly radical group in pre-revolutionary Russia - lacked printing facilities within their own country and were forced to initiate their propaganda activities from abroad. During the February Revolution of 1917, the leaders of the anarchist movement (Petr Kropotkin, Apollon Karelin, Vsevolod Volin, Alexandr Ge and others) were released from prison, and from internal and external exile, and anarchist literature and periodicals were legalized in Russia.
This collection reveals the eventful history of Russia during the revolutionary era, from the perspective of metropolitan and provincial newspapers and journals published by the most radical political forces. Furthermore, these materials shed new light on the relationship of the anarchists with the Bolsheviks and the Soviet State, and also reveal the impact of anarchist ideas on the literature and art of the period.

Periodicals from the Major Cities and the Provinces
The revived anarchist groups issued brochures, pamphlets, newspapers and journals and re-published the old works of the theoreticians of anarchism. From an ideological and political point of view, Russian anarchism was divided into a host of sub-movements. Consequently, the anarchist periodicals were characterized by a wide diversity of content. By the spring of 1918, anarchist groups of various convictions were active in 130 cities and towns all over the country. Various sources indicate that they were publishing up to 55 newspapers and journals. This collection presents the most interesting samples of that period. Leading publications were those originating from Petrograd and Moscow: the newspapers Anarkhiia (circulation 20,000 copies) and Burevestnik, as well as the weekly journals Svobodnaia Kommuna (10,000 copies), Volnyi golos truda (15,000 copies), Golos truda, Golos anarkhista.
The newspapers and journals from Kiev, Kharkov and Krasnoyarsk presented in this collection are particularly rare documents, since most anarchist publications from the province have not survived.

Anarchism and Avant-garde Art in Revolutionary Russia
Special attention should be given to the various connections of anarchism with radical trends in Russian art and literature. The informal alliance of artist radicals with radicals in the political field was strengthened by the fact that the anarchists were actively involved in various organs of new Soviet power during the months following the October Revolution of 1917. Moreover, in these early days, the artistic policy of the Bolsheviks was largely based on the principles of anarchism, and their actions were guided by anarchist manifestos, particularly their decree on the "nationalization of art" (1918). Anarchist ideas had a strong impact on the futurists, concerning a revolutionary transformation of life. Of particular interest is the newspaper Anarkhiia, which prominently featured the section "Creative Work". This section included regular contributions by Kazimir Malevich, Aleksandr Rodchenko, Aleksei Gan, O'lga Rozanova, Natan Altman, Arthur Lourié and Nikolai Punin. Their articles represent a wide scope of creative interests among the artistic avant-garde, from music and painting to the 'proletarian' theatre and cinematography.