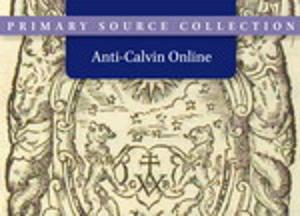 During the sixteenth century Protestant authors had grasped the importance of winning over the souls and minds of the French people from the outset and the production of Genevan presses was therefore mainly in French. This unique selection of writings reflects the Catholic response to Calvinism, with works attacking the precepts of Calvinism and those defending the Catholic doctrine against condemnations by Calvinists.

Catholic writers were initially slow to respond to the challenge presented by Calvinism in France. Jean Calvin´s Institution de la religion chrétienne was first published in French in 1541. This was the fundamental text from which the Calvinist doctrine was built, and over the following years a large variety of texts sprung both from his own quill and of that of other leaders of the Reformed churches. Yet the first Catholic work in the vernacular explicitly to mention Geneva was published only in 1550, and it was not until 1559 that Calvin himself was directly attacked on the title page of a French book. The move to counter Calvin´s influence within France had thus got off to a slow start.

In the struggle for the souls and minds of the French people that divided Catholics and evangelicals into two conflicting churches, vernacular print was a vital battleground. Unlike Latin, the language of the learned, books published in French could be read and understood by far larger sections of society and therefore reached out to touch people who would otherwise have been excluded from the debate. Protestant authors had grasped the importance of this wider public from the outset and the production of Genevan presses was predominantly in French. If the Catholic Church wished to preserve its position in France, it was vital to respond to the gauntlet thrown down by the Calvinist leaders. It is this response, the writings of the French Catholic authors against Calvin and his teachings, that are presented here.

After the first tentative exchanges, the early 1560s witnessed a rapid increase in the vernacular output of Catholic authors. What is most striking about this period of increasingly fraught relations between the faiths is the wholehearted involvement in the publication of religious polemic of respected figures of the Catholic hierarchy, men who would have been expected to prefer the learned language of Latin. But whatever their preferences, they loaned their skills to the battle to turn back the Huguenot tide. In this we see a crucial difference from the situation in Germany in the first evangelical generation. Here the reluctance of German opponents of Luther to engage in theological debate in the vernacular ceded a crucial advantage to the evangelicals, a mistake that was not repeated in France. Those involved include some of the most respected theologians of the Faculty of Theology of the Sorbonne, men such as René Benoist and Gentian Hervet, or, later in the century, Arnaud Sorbin. These men contributed serious treatises on complex questions, works that can be contrasted with the more robust and vituperative anti-Calvinist works such as Le double des lettres envoyées à Passevent parisien or Guillaume de Reboul's La cabale des réformez. Both types of text played a vital part in the strategy of rallying French opinion to traditional religion, a strategy clearly approved by the elite of the Church as some of these works were published in Rheims under the aegis of the archbishop's official printers. With works appearing in Bordeaux, Toulouse, and Aix-en-Provence anti-Calvin printing became a nationwide phenomenon.

The selection of works presented here offers a comprehensive range of the theological arguments deployed by Catholic theologians against Calvin and his followers in France. It includes both works attacking the precepts of Calvinism and those defending the Catholic doctrine against the criticism and condemnation of Calvinist authors. Some authors take a different approach, with a robust attack on Calvinist church practice, alleging a wide variety of deviant behaviour in terms that call to mind traditional methods of derogating heretics and deviants. All were important in establishing clear distinctions between the contending faiths. The selection concentrates, however, on issues that divided the church, rather than following particular events of the Wars of Religion. Although events such as the Massacre of St Bartholomew also sparked a vehement exchange of pamphlets, most of these concentrated on the particular circumstances of the events and their political causes and repercussions rather than examining the underlying differences in religious opinion.

The outburst of vernacular anti-Calvin works in the 1560s represents almost half the titles published until the end of the century. With the large numbers of conversions to Protestantism that took place in the years between 1555 and 1562 - some of which were very high profile - the Catholic Church realised the gravity of the situation. Conversely, the smaller production of the late 1560s and subsequent years reflected the dramatic slowing of the previously hectic growth of the Calvinist churches that followed the outbreak of the wars of Religion and the Peace of Amboise in 1563.

Despite this reduction in publications, the presses continued to churn out works attacking Calvinism with great regularity throughout the subsequent decade, before this polemic begins to tail off in the first years of the 1580s. The death of Anjou changed this state of affairs: with a Protestant Henry, king of Navarre, set to inherit the crown, anti-Calvinist books flourished once more. With so much at stake, condemning the heretics and countering their arguments took on renewed importance. This proliferation of Catholic treatises also served as a theoretical underpinning for the movement of religious renewal and political opposition associated with the Catholic League. However, the death of Henry III at the hands of Jacques Clément in 1589 changed this state of affairs. A Protestant was now claiming the throne and the wars that opposed Henry IV to the Catholic League transferred the focus away from the theological debate: preventing Henry from successfully asserting his right was now the prime concern. Catholic printers' therefore engaged primarily in the production of works dealing with contemporary political and military events that would aggrandise the achievements of the League and assist the opposition to Henry, though ultimately unavailingly.

After the fall of Paris and the gradual submission of the main Leaguer figures came peace and a final settlement that gave the Huguenot churches limited but very definite civic freedoms. This settlement sparked a renewal of polemic against the French Reformed Churches. The conversion of the king gave these works new legitimacy and the rights given to Calvinists within the kingdom after the edict of Nantes in 1598 rekindled the theological exchanges that had been so vibrant in the 1560s. The very end of the sixteenth century thus saw the emergence of a new generation of doctors of the Sorbonne engaging the Calvinist enemy, though now the goal was not to prevent the destruction of French Catholicism, as had seemed a real possibility in the earlier generation, but to encourage further defections from what was an increasingly embattled minority church. In this respect the religious writings that emerged at the very tail end of our period prefigured a debate that was to rage through most of the following century.