Archive of the Christian Student Movement of Cuba Online 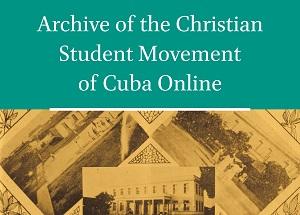 The Archive of the Christian Student Movement of Cuba (MECC) is part of the Archives of Christian Churches and Organizations in Cuba (CCOC). It consists of documents of the Movimiento de Estudiantes Cristianos de Cuba (MEC), an affiliate of the World Student Christian Federation, on the organization’s history, activities, and relations with related organizations between 1960 and 2018.

Introduction
The Archive of the Christian Student Movement of Cuba (MECC) consists of documents of the Movimiento de Estudiantes Cristianos de Cuba (MEC), an affiliate of the World Student Christian Federation, on the organization’s history, activities, and relations with related organizations between 1960 and 2018.

Historical Background
While there had been a small and sporadic Protestant presence on the island as far back as the early colonial era, the first formal congregations emerged only in 1871, following a short-lived declaration of religious tolerance for Spain and its colonies. These first congregations served primarily Havana’s resident and floating English-speaking Protestants. At the time, tens of thousands of Cuban political exiles resided in various US locations from Key West to New York City, where some joined Protestant churches. Following the end of the Ten Years’ War (1868-1878) against Spain, some of these converts returned to the island and began to spread the work of various Protestant denominations. Cuban layman Evaristo Collazo established the first Presbyterian works in Havana in 1890 but had to close the mission five years later, when Cubans launched another war of independence against Spain.
The Presbyterian Church was officially established in Cuba by the Presbyterian Church in the United States of America (PCUSA) in December 1901, during US military occupation. Three years later, Cuba’s Presbyterians founded the Presbyter of Havana. During the Republican era (1902-1958) the Church experienced growth and expanded its religious, educational, and charitable work. Much reduced in number of congregants and freedoms, the Presbyterian Church persisted during the revolutionary period that began in 1959. In 1967, it became independent from PCUSA and was renamed Iglesia Presbiteriana-Reformada en Cuba, IPRC. During the 1990s and first decade of the twenty-first century, this and other Protestant denominations experienced significant growth, as thousands of Cubans sought spiritual solace during the economic, social, and moral crisis of the Special Period.
Cuba’s Movimiento Estudiantil Cristiano (MEC) was founded in 1960, the second year of the Cuban Revolution, as a Christian ecumenical organization with representation from the main branches of Christianity. Partner churches and denominations have included the Catholic, Presbyterian, Baptist, Methodist, Reformed, and Pentecostal churches, and the Church of Christ and Church of God. It is an autonomous affiliate of the World Student Christian Federation (Federación Universal de Movimientos Estudiantiles Cristianos, FUMEC), founded in 1895. MEC is a member of the Cuban Council of Churches; it maintains active relations and correspondence with numerous island-wide and international religious organizations, among them its local chapters, Cuba’s national churches, SET, the World Council of Churches, FUMEC and its Latin American and Caribbean regional organization.

The Archive
This archive consists of nearly 14,000 scans of materials dated 1960 to 2018, organized into sixty folders. It includes a wide range of documents: correspondence, minutes, year plans, assembly and event programs, reports, budgets, bulletins, pamphlets, photographs, and devotional and liturgical resources.
The majority of these materials are labeled Documentos Varios (various documents). These include two folders of materials from the 1960s and 1970s that include MEC’s Constitution (1961) and other foundational materials.
The Archive has a large component of documents pertaining to FUMEC and its regional Latin American and Caribbean organization. Among these are FUMEC’s 1980 rules and regulations and numerous publications on subjects such as human rights, anti-imperialism, and women’s organizations. One folder holds valuable materials on FUMEC’s Encuentro Europa-América Latina y el Caribe, an international conference on the consequences of the 500th anniversary of Columbus’ arrival in the Americas (Quito, Ecuador, 1991). These and related documents offer valuable information for researchers interested in the broader subjects of Liberation Theology and ecumenism.
MEC’s materials provide windows into revolutionary Cuba’s history. For example, documents about discussions on the ongoing Rectification of Errors Campaign of 1986-1988; on the deepening crisis of the Special Period, i. e., a report from a particular congregation informing that it could no longer publish its bulletin because it lacked a typewriter, paper, and other materials; and sources documenting Cuba’s economy hitting rock bottom in 1993, i.e., bulletin articles on growing income and social inequality.
MEC’s extensive photo collection focuses on particular events (1980-2014); two folders, for example, include pictures of excursions to Germany.
Dozens of lose numbers of journals and bulletins appear in different Documentos Varios folders and in folders specifically dedicated to such materials. Titles include Boletín Impacto (bimonthly bulletin of MEC-Matanzas); Boletín NIKE and MEC’s Encuentro (2013-2017)

Note: The Archive of the Evangelical Theological Seminary includes sixteen folders on MEC.