Archive of the Evangelical Theological Seminary of Cuba Online 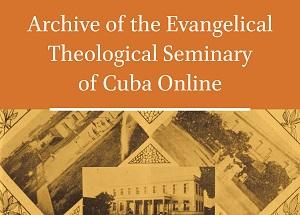 The Archive of the Evangelical Theological Seminary of Cuba (SETC) is part of the Archives of Christian Churches and Organizations in Cuba (CCOC). It consists of documents of the Seminario Evangélico de Teología of Matanzas, Cuba, from its foundation in 1946 to the present. It includes a.o. foundational documents, periodicals, correspondence, materials from distinguished professors and documents of the Conferencia Cristiana por la Paz, Latin America and the Caribbean.

Introduction
The Archive of the Evangelical Theological Seminary of Cuba (SETC) consists of documents of the Seminario Evangélico de Teología of Matanzas, Cuba, from its foundation in 1946 to the present. It includes a.o. foundational documents, periodicals, correspondence, materials from distinguished professors and documents of the Conferencia Cristiana por la Paz, Latin America and the Caribbean.

Historical Background
While there had been a small and sporadic Protestant presence on the island as far back as the early colonial era, the first formal congregations emerged only in 1871, following a short-lived declaration of religious tolerance for Spain and its colonies. These first congregations served primarily Havana’s resident and floating English-speaking Protestants. At the time, tens of thousands of Cuban political exiles resided in various US locations from Key West to New York City, where some joined Protestant churches. Following the end of the Ten Years’ War (1868-1878) against Spain, some of these converts returned to the island and began to spread the work of various Protestant denominations. Cuban layman Evaristo Collazo established the first Presbyterian works in Havana in 1890 but had to close the mission five years later, when Cubans launched another war of independence against Spain.
The Presbyterian Church was officially established in Cuba by the Presbyterian Church in the United States of America (PCUSA) in December 1901, during US military occupation. Three years later, Cuba’s Presbyterians founded the Presbyter of Havana. During the Republican era (1902-1958) the Church experienced growth and expanded its religious, educational, and charitable work. Much reduced in number of congregants and freedoms, the Presbyterian Church persisted during the revolutionary period that began in 1959. In 1967, it became independent from PCUSA and was renamed Iglesia Presbiteriana-Reformada en Cuba, IPRC. During the 1990s and first decade of the twenty-first century, this and other Protestant denominations experienced significant growth, as thousands of Cubans sought spiritual solace during the economic, social, and moral crisis of the Special Period.
The Seminario Evangélico de Teología (SET) is an interdenominational Protestant seminary located in Matanzas, Cuba. It was founded in 1946 by representatives of Presbyterian, Methodist and Episcopalian churches. It offers a range of bachelor, masters, and doctoral degrees and is affiliated with the World Council of Churches. Over the decades, the seminary has published various journals and bulletins, including the ‘revista’ Cuba Teológica. Alfonso Rodríguez Hidalgo served as SET rector from 1946 until 1961, when he left Cuba; Sergio Arce Martínez from 1969 to 1984, and Reinerio Arce Valentín 1984-1993.

The Archive
This collection consists of almost 40,000 scans of records and materials, divided into several groups: Foundational Documents, 1946-1949 (2 folders); Rare and Valuable Documents (29 folders); Correspondence, 1946-1986 (17 folders); National and International Events, 1975-2014 (48 folders); Peace Conferences (21 folders); Jornadas Teológicas (6 folders); Materials of Sergio Arce Martínez (65 folders); Materials of Professor René Castellanos (86 folders); Texts by National and International Figures (17 folders); MEC Documents (16 folders); and documents of the Conferencia Cristiana por la Paz, Latin America and the Caribbean (CCP-LAC) 21 folders that include documents of several annual conferences held in various Latin American and Caribbean countries. The collection also includes issues of different periodicals published by SET: Revista del SET Cuba Teológica (1982-present), Didajé (1998-present); and Analísis de la Realidad Actual (ARA).
This collection’s foundational documents provide valuable information on SET’s early years. Among them, we find the program of SET’s inauguration. One learns about the key role of founder Dr. Rodríguez Hidalgo, contributions from the United States, first curriculum, and faculty. Folders labeled Rare and Valuable include photographs, pamphlets, and bulletins. Among the hundreds of photographs is one of the construction of SET’s chapel (1955) and of a church meeting attended by Fidel Castro and US politician Jesse Jackson.
SET correspondence and other documents allow researchers to trace developments in Church-state relations. Several documents point to the church’s welcoming of the Revolution in 1959. Several letters between Rodríguez Hidalgo and E. A. Odell of the Presbyterian Board of National Missions reflect the escalation of “tensions” and “confusion” as early as April 1959. In very discrete fashion, Rodríguez Hidalgo increasingly expressed concerns about the erosion of religious liberties. One December letter from Odell inquires about the disappearance of two disaffected Presbyterians, apparently at the government’s hand. By late 1959, Rodríguez Hidalgo is no longer praising the Revolution. Some letters speak of ministries for Cuban “migrants”—exiles more accurately—resettled in the United States.
The collection also houses texts and other materials by Arce Martínez, Castellanos, and other figures, including Arce Martínez’s master’s thesis and diploma, dozens of note books written by Castellanos, and an 1872 sermon by Rev. Joaquín de Palma. Other authors include Adolfo Ham, Rodríguez Hidalgo, and Ofelia Ortega.
While not directly affiliated with SET, papers of The International Christian Conference for Peace, Latin America and the Caribbean (Conferencia Cristiana por La Paz, CCP-LAC) are included in this archive. The Christian Peace Conference was formed in Prague in 1958 and expanded its work to Latin America in 1975. Its first conference in the hemisphere took place in Panama in 1978, followed by a conference in Matanzas (1979), and several others over the next decade in different countries of Latin America. Cuba hosted the 1983 conference but could not host one scheduled for 1994 due to lack of resources. Events included international conferences with leading theologians and scholars, such as Harvey Cox, Ernesto Cardenal, Frei Beto, Sergio Arce Martínez, Raúl Gómez Treto, Pierre Bastián, and Luis Rivera Pagán.

Note: The Archives of the Presbyterian Church in Cuba contains thirty SET theses.