Archives of the Church of Uganda Online 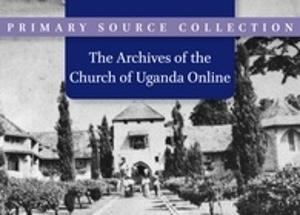 Archives of the Church of Uganda Online

The records in this collection document the history of the Church of the Province of Uganda, including some of the first written documents about and originating from Uganda. It covers the period from the arrival of the first Church Missionary Society missionaries at King Mutesa's court (1877) to the early 1980s. Contents of the collection include legal and administrative documents, correspondence, publications, personal records and more from the Offices of the Archbishops and Bishops of Uganda, the Education Secretary General, the General, Financial, and Provincial Secretaries, the Provincial Treasurer, and the Mother’s Union.

This publication was realized with the support of the Kenneth Scott Latourette Fund, Yale Divinity School Library.

Christianity came to Uganda relatively late compared to many other parts of Africa. The first Church Missionary Society missionaries arrived at King Mutesa's court on 30June 1877, seventy-eight years after the founding of the Church Missionary Society in Great Britain. However, within eight decades, after having passed through much persecution, Uganda had become one of the most successful mission fields in the world. By 1914, through its indigenous teachers and a few European missionaries, nearly the whole of present-day Uganda had already been evangelized. In 1961 the growth of the Church of Uganda was recognized in the Anglican Communion with the establishment of the Church of the Province of Uganda, Rwanda-Burundi and Boga-Zaire.

This collection is an important source not only for the history of Christianity in Uganda, but also for the political and social development of the country, both before and after its independence.

These records trace the development of the Church Missionary Society (CMS) Uganda Mission and the Native Anglican Church (NAC) in Uganda, including the Uganda Diocese and the Diocese of the Upper Nile.

These records document the development and operations of the CMS/NAC schools, their governing bodies, and their interaction with the Uganda Protectorate Education Department which regulated education within Uganda.

This collection contains all files related to Women’s work and Women’s Organizations.

This eighth collection contains the files of the Provincial Treasurer as well as correspondence with the provinces of Uganda and with related organizations such as the WCC and Missionary Societies.

The documents in this collections were scanned at the Uganda Christian University in Mukono, Uganda in the period 2007 – 2009. Initial objective of the project was to prepare a long-term preservation copy on 35mm microfilm, which has been completed. Positive copies of these microfilms are available from Brill. This online publication gives access to the original scans that were made. Where possible, OCR has been applied to enable full text searching. OCR of handwritten documents was not possible. Especially because of the limited metadata, the full text search is an important addition, even if the document is typed in the Bantu language.

As with many archival collection the available metadata is limited to the brief description of boxes and folders. The folder information has been copied into the title field of the online publication (and in the corresponding MARC records). Box information with a reference to the section of the archive can be found in the Reference field. Title and section information is also available on the first page of each folder. Main sections in the collection are: