Archives of the Presbyterian Church of Cuba Online (pre-2019) 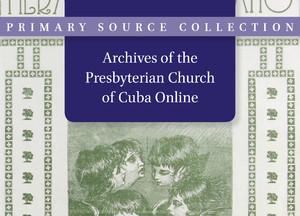 Archives of the Presbyterian Church of Cuba Online

This collection makes available for research the records of the Iglesia Presbiteriana-Reformada en Cuba (IPRC) and predecessor Presbyterian churches and missions in Cuba, including a complete run of Heraldo Cristiano, the church’s newsletter, 1919 – 2010, which provides a framework for the history of the church. Also included are the periodicals Juprecu and Su Voz, early mission records, originally maintained in English and then in Spanish as the congregations took over management of their churches and schools from the mission workers. These include session minutes and membership/baptism/marriage/death records, as well as minutes of men’s, women’s, and youth groups, including their mission work in their communities.

This publication was realized with the support of the Kenneth Scott Latourette Fund, Yale Divinity School Library.

The Archives of the Presbyterian Church of Cuba Online collection consist of the records of the National Presbyterate of Cuba (1904- ), the First Havana Congregation founded in 1901 (including a group made up exclusively English-speakers), and the records of eleven other Presbyterian congregations located in or around Havana: Guanabacoa, Güines, Güira de Melena, Luyanó, Nueva Paz, Palos, Regla, San Antonio, San Nicolás, Vega, and a small church that served Havana’s Chinese population. These records are in Spanish, begin in the first decade of the twentieth century and go up to the 2010s. The collection also includes fairly complete sets of Presbyterian periodicals: Heraldo Cristiano (1919-2010), the official monthly publication of the Cuban Presbyterian Church; Juprecu (1961-2009), the bimonthly publication of the Unión Nacional de Jóvenes Presbiterianos (Presbyterian Youth Union), and a collection of quarterly Su Voz (1961-2010).

While there had been a Protestant presence on the island as far back as the early colonial era, the first formal Protestant congregations emerged only in 1871, following a short-lived declaration of religious tolerance for Spain and its colonies. These first legal non-Catholic congregations served primarily Havana’s established and floating English-speaking Protestants. At the time, tens of thousands of Cuban political exiles resided in various U.S. locations from Key West to New York City. Following the end of the Ten Years’ War (1868-1878) against Spain, Cuban Protestants returned to the island and began to spread the work of various Protestant denominations. Cuban layman Evaristo Collazo established the first Presbyterian works in Havana in 1890 but had to close them five years later, when Cubans launched yet another war of independence against Spain.

The Presbyterian Church was officially established in Cuba in December 1901, during U.S. military occupation. Three years later, Cuba’s Presbyterians founded the Presbyter of Havana. During the Republican era (1902-1958) the church experienced growth and expanded its religious, educational, and charitable work. Much reduced in numbers and freedoms, the Presbyterian church persisted during the Revolutionary period that began in 1959. In 1967, Cuba’s Presbyterian churches became independent, and formed the Iglesia Presbiteriana-Reformada en Cuba (IPRC; Presbyterian-Reformed Church in Cuba). During the 1990s and first decades of the twenty first century, this and other Protestant denominations experienced significant growth.

The bulk of Cuba’s Presbyterian Church records consist of scores of libros de actas (books of minutes) of each of the churches’ consistory meetings, regular meetings that included clergy and church elders. It also includes the minutes books of different committees and associations, among them those kept by men’s, women’s, and youth organizations, as well as Sunday Schools, Christian Education, and Benevolence groups. These books provide important information on a variety of topics ranging from clergy appointments and membership lists to budgets and the various roles played by Presbyterian women over the decades. Of great value to historians and genealogists are the records of baptism, marriage, and death. Because these records span over one hundred years, they allow scholars and other individuals to recognize and track changes over time. For example, one can trace the growth of various congregations and gather important sociodemographic data on gender, ages, and socioeconomic composition.

These records also provide insights on the participation and church activities of various ethnic and racial groups. There is a book of minutes of the consistory of an English-speaking congregation in Havana (1919-1926) and a particularly interesting set of bound volumes of the Chinese congregation in Havana. These materials are rich in information; they provide a historical sketch of these congregations, a complete list of members, records of baptism and marriage, and a revealing list that states the reasons why particular individual members left the church: “indifference,” “moved to the US,” or “joined a Pentecostal church.”

Besides books of minutes, the collection includes a wide range of historical documents and ephemera such as photo albums, church bulletins, lists of offerings pledges, and various other materials that offer information on the congregations, including the existence of a church-affiliated Boy Scout troop, lists of individuals served by church-run dispensaries, etc. These materials complement the microfilmed Princeton University Library collections of materials on religion in Cuba, among them, “Cuba Protestant Serials” and “Protestant Churches in Cuba.”

The Heraldo Cristiano magazine is particularly useful for anyone seeking a good understanding of the church’s development since 1919. Each edition consists of between fifteen and thirty-six pages of articles and regular sections. These include family devotionals, Sunday school curricula, news from around the world, and up to the mid 1930s, a section called “Cuba Seca” (dry Cuba) devoted to the subject of temperance. Both Cuban authors and US-based clergy and laypeople contributed to the magazine. The Heraldo Cristiano included information on church happenings, clergy appointments, and a social notes section announcing births, baptisms, and marriages, as well as obituaries. The monthly publication also carried photographs of clergy, church buildings, and benevolent work at orphanages and retirement homes. One particularly telling photograph showed a half-burnt Bible, victim of the intolerant zeal of a Catholic priest. The Heraldo Cristiano also carried ads for bookstores selling Christian books, Protestant schools, and other products and services.

The Heraldo Cristiano is also a valuable source to trace the relations of the denomination with various Cuban governments, particularly the revolutionary government since 1959. The February 24, 1959 issue, for example, carried a jubilant editorial entitled “La fiesta de la Patria liberada.” With the passing of time, the Presbyterian Church increased its support for the state and its official magazine included titles such as “Presencia del hombre protestante en la revolución.”

While students of Latin America demography have, for many decades, made good use of Catholic baptismal, confirmation, marriage, and burial records, few have consulted similar records generated by Protestant denominations. Such records, included in this collection, can shed much light on demographic questions and social realities. For example, the role of women in various leadership positions and as educators; and the rapid Cubanization of the clergy in the early years of the twentieth century. Genealogists and individuals putting together family trees will also find these records useful.

This collection offers multiple possibilities for those interested not only in the history of Protestantism on the island but for individuals in search of windows to Cuban culture and society. It will stimulate scholars to venture into a number of historical questions such as: Protestant positions vis-à-vis Catholicism and Afro-Cuban religions; the effects of the Cuban Revolution on Protestant churches and the impact of the consequent massive exile on church membership, attendance, and finances; and the role of the Presbyterian church during the profound economic and moral crisis of the Special Period that began in the early 1990s.

Luis Martínez-Fernández, Ph.D., is Professor of History at the University of Central Florida. His fields of research include Protestantism in Cuba and he authored the book Protestantism and Political Conflict in the Nineteenth-Century Hispanic Caribbean (New Brunswick, NJ: Rutgers University Press, 2002).