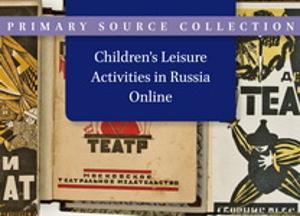 
The material gathered here offers a unique insight into one of the most important and characteristic areas of socializing the young in early Soviet Russia, and a window into the mentality of the `first Soviet generations’ as well. This so-called movement for ‘socialisation through play’ and ‘rational leisure’ was documented in many hundreds of publications, both in periodicals (for example, Doshkol’noe obrazovanie [Pre-School Education], Prosveshchenie na transporte [Education in Railway Schools], Na putik novoi shkole [On the Road to the New School], and Pedologiya), and in separate short books and brochures. The selection here, taken from materials held in the Russian State Library and in the Ushinsky Pedagogical Library in Moscow, gives a representative overview of the different trends in children leisure activities and games and runs chronologically from 1917 to the late 1930s.

The late nineteenth and early twentieth centuries witnessed an upsurge of interest among Russian intellectuals in play as a psychological and pedagogical phenomenon. As the Italian psychologist Giovanni Amonio Colozza, whose treatise was translated into Russian in 1909, put it, play represented 'the free and central expression of those interior things that need to be outwardly expressed'. This view of play as central to childhood development was also influenced by the work of James Sully and G. Stanley Hall, and other members of the 'child study' or 'paidology' movement. The 'mother's diaries' and 'father's diaries' extensively published by Russians in the 1910s and early 1920s regularly noted children's games as part of their record of day-to-day development, and after the Revolution, much work on recording games was also done by the Experimental Stations of Narkompros.
This psychological or anthropological view of play was only one among various approaches, however, and after the Revolution, and particularly from 1925, it began to be vigorously challenged by an instrumental view of play as a central element in peer-group socialisation and, more particularly, in learning about future adult roles. Play was used, as methodological guides for nursery-school teachers indicate, in order to inculcate 'politically correct' attitudes. Baby dolls and fashion dolls were regarded with disapproval, because they reinforced traditional gender stereotypes and, in the second case, frivolity; dolls representing members of 'national' (i.e. ethnic) minority groups were given the stamp of approval, since they could be used to tutor children in internationalism. Children were taught new variants of familiar games, such as constructing the Lenin Mausoleum with snow bricks dyed red, rather than houses or igloos, or playing Co-operative Shop and Collective Farm Market using wooden models and building blocks. Even before the Revolution, efforts to provide children with 'rational leisure' had begun (an example was the children's summer playground run by volunteers on Petrograd Side, St Petersburg, in the 1910s); now, the Pioneer and Komsomol movement devoted huge energy to efforts to 'clean up' children's games in the streets and courtyards of cities, and also among village children. Pioneers themselves were used as a 'revolutionary avant-garde' to propagandise new kinds of game among 'unorganised children': building bird-boxes instead of robbing nests, playing 'Communists' against 'Fascists' instead of 'Cossacks and Robbers', engaging in healthy and beneficial 'active games' instead of taking part in games of chance such as 'heads or tails' or playing cards for money.
The movement for 'socialisation through play' and 'rational leisure' was documented in many hundreds of publications, both in periodicals (for example, Doshkol'noe obrazovanie [Pre-School Education], <i>Prosveshchenie na transporte</i> [Education in Railway Schools], <i>Na puti k novoi shkole</i> [On the Road to the New School], and <i>Pedologiya</i>), and in separate short books and brochures. The selection here, taken from materials held in the Russian State Library and in the Ushinsky Pedagogical Library in Moscow, gives a representative overview of the different trends. Our choice has been carefully considered to include books published in the provinces as well as in Moscow and Leningrad, to place heavily ideologised tracts alongside more liberal materials, and to offer a spread of material covering different age groups, from pre-schoolers to pre-teens. We have concentrated on books that contain material about the actual practices of play, as opposed to schematic recommendations, and on material that is particularly characteristic of the era. The selection runs chronologically to the late 1930s (the Second World War brought a break in attitudes to this subject, as in other areas of child care).
Many of the items included are now extremely rare - the condemnation by state decree of 'pedological perversions' in 1936 led to a purge of pedagogical literature from many libraries, and, as with other kinds of functional literature, the guides were also often used till they wore out. The material that we have gathered offers a unique insight into one of the most important and characteristic areas of socialising the young in early Soviet Russia, and a window into the mentality of the 'first Soviet generations' as well.
K.D. Ushinski State Scientifi c Pedagogical Library, Moscow National Library of Russia, St. Petersburg