The Archives of the Church in North India - Archival Collection 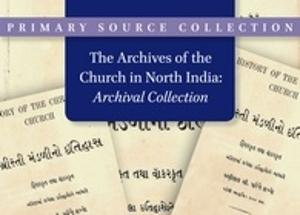 A collaboration with Yale University, the online version of The Archives of the Church in North India comprises archival and printed material from the Gujarat Diocese of the Church of North India. The archives have been divided into two sections: the archival collection, consisting of meetings, correspondence and reports, and the monograph collection of early printed monographs from mission presses. Title lists and MARC21 records are available.

Historical note:
In 1840 the Presbyterian Church in Ireland commissioned its first foreign missionaries, Alexander Kerr and James Glasgow. Together with their newly married wives they sailed for India, arriving in Bombay in 1841. After consultation with the Scottish missionary Dr John Wilson they chose the Kathiawar Peninsula as the field of their labours and work was begun in Rajkot. Alexander Kerr died in August 1841 but the commitment of the Irish Presbyterian Church to the area continued and by 1843 four new missionaries had arrived and mission stations were set up in Porbander and Gogha.

The work gradually grew, new stations were opened and the IP Mission took over as other missionary organisations withdrew. In 1847 the London Missionary Society closed its work in Surat and the IP Mission was invited to take over the church, mission house and the printing press there. In 1863, the IP Mission restarted missionary work in Ahmedabad, the Society for the Propagation of the Gospel having withdrawn in 1851. In 1859 when the LMS withdrew completely from Gujarat the IP Mission took responsibility for a number of stations including the first Christian village in Gujarat - Khashivadi near Borsad - founded in 1847. Further Christian villages were founded at Ranipur near Ahmedabad (1862) and later at Wallacepur, Khadana, Porda, Anand, Brookhill and Nadiad among others. Supplemented in 1873 by the Ladies' Association or Zenana Mission and in 1889 by the Jungle Tribes Mission the work of the IP Mission expanded encompassing evangelistic work, educational and medical work. The famine of 1899-1900 led to the expansion of the orphanages run by the mission.

The first theological training course was set up in 1864; and in 1892 Fleming Stevenson Divinity College opened under Rev G P Taylor. At first it was accommodated in the IP Mission High School, Ahmedabad and student accommodation was in the group of houses still known as Dr Taylor's Chawl. In 1913 a new building was opened, designed by Fleming Stevenson's son J Sinclair Stevenson. Meanwhile the Methodist Mission (USA) had founded the Florence B Nicholson School of Theology in 1906 in Baroda and the Church of the Brethren (USA) had founded the Bulsar Bible School in 1913. These three schools combined to form the Gujarat United School of Theology in 1942. Initially housed in Baroda it moved to Ahmedabad in 1953 to the former Stevenson College buildings. After the formation of the Church of North India in 1970 it continued as a joint CNI and Methodist Institution for some years.

On the establishment of the Presbytery of Gujarat and Kathiawar in 1900 a Mission Council formed solely of missionaries became responsible for outreach work (educational, evangelistic, medical, property etc), while the Presbytery undertook full responsibility for the life of the local congregations. In 1948 the administrative work of the Mission Council was taken over by a Joint Board consisting of twelve representatives of the Gujarat Church Council (Presbytery) and twelve missionary representatives. The Mission Council continued, with limited responsibilities for the welfare of missionaries and their families. In 1957 the Joint Board became the General Board with all twenty four members appointed by the Church Council. All mission property apart from churches, manses and cemeteries was vested in the IP Mission Trust Association which implemented any decisions made by the General Board of the Gujarat Church Council. In 1969 the trustees of the IP Mission Trust Association were changed to those of the UCNI Trust Association. In place of the General Board the Gujarat Christian Service Society was appointed to act as managers of the Trust. This framework was handed on when the CNI was inaugurated in 1970. These administrative changes reflected the growing strength of the indigenous Church and the resulting gradual withdrawal of the Irish Presbyterian missionaries from Gujarat. However strong links still continue between the Churches in India and Ireland.
This collection, comprising of 680 books and 163 boxes of archive material was amassed by the Historical Committee of the IP Mission. Initiated by Dr Hugo Hezlett in the 1950s the aim of the committee was to document the activities of Mission and Church rather than create an institutional archive. This work was continued by Dr Robin and Mrs Frances Boyd. Material was collected from the various mission stations, from private collections and interested members of other churches, and from the Briars bungalow at Mount Abu, where Dr J M Lyle had assembled a historical collection. But by far the largest source of material was the Surat Mission Press, which closed in 1959. After the closure the collection was transferred to the custody of the Principal of the Gujarat United School of Theology and due to lack of space was housed in the Khrist Seva Sedan building adjacent to the college. Until the initiation of the present archive project there has never been a complete list of the collection, although an incomplete card index to the printed books existed. In 2006 the collection was transferred to the main GUST building. It was then reorganised and re-housed, catalogued and made available for study. This task was accomplished through the voluntary service of Miss Clara Anderson BA Hons (Oxon) MARM during a period of leave from her work as an assistant archivist at the Royal Society, London.

The Archives of the Church in North India - Archival Collection, Leiden and Boston: Brill, 2012 <http://primarysources.brillonline.com/browse/church-of-north-india-archival-collection>