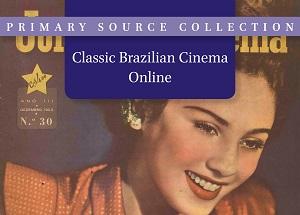 A unique collection of digitized historical film magazines from the 1910s to the 1970s, providing students and researchers with easy access to rare and previously dispersed sources documenting the cinematographic history of the largest country in Latin America.

Brazilian cinema gained international acclaim through the Cinema Novo of Glauber Rocha, Nelson Pereira dos Santos and other directors in the 1960s. Yet Brazil produced numerous films throughout its various regions since as early as 1896. Until now, a proper appreciation of early Brazilian cinema has been hampered by the loss of a significant number of the films, as well as a lack of available printed sources pertaining to Brazil’s movie industry.

The present collection remedies this situation by providing easy online access to more than sixty Brazilian movie magazines, from the earliest ones published in the 1910s to later magazines covering the 1960s and early ‘70s. Many of them survive in only a few or even single copies and have not been available to researchers before. By bringing together film magazines from institutions and private collections in both Brazil and the United States, this collection dramatically increases the number of sources available to researchers interested in understanding the role of cinema in the largest country in Latin America.

Major transformations
The magazines in this collection not only shed a light on the history of Brazilian film — whose production periodically encountered great financial difficulties before it would expand again —, but also on the creation of both a market and a cinematographic culture in Brazil, strongly influenced by France until World War I, then dominated by Hollywood. In addition, the collection documents the major transformations that took place after World War II, when Brazilian audiences became increasingly familiar with films produced in other Latin American countries, as well as in Asia and Europe.

From Silent Period to Cinema Novo
By digitizing for the first time magazines on Brazilian cinema from the archives of the Cinemateca do Museu de Arte Moderna (MAM) in Rio de Janeiro, the Fales Library & Special Collections at New York University (NYU) and four private collectors in Brazil, this collection offers a unique source of a wide-ranging scope. From Portuguese magazines issued by the major Hollywood studios — Revista Universal (1921), Mensageiro Paramount (1926), Films (1926) by MGM, and Fox Revista (1927) — to highly influential publications from the Silent Period, such as Selecta (1915). The collection also contains trade magazines aimed at owners of movie theaters, which are little known and have virtually never been studied before, including O exhibidor (1927), Jornal do Exibidor (1938), Revista do Exibidor (1952) and O Exibidor (1955). Many publications not only address cinema, but also offer valuable material for the study of Brazilian theater, radio, and music, such as the influential Cine-Rádio Jornal (1938) or the corporate magazine Atividades Byington (1938). The collection also includes popular magazines read by (young) movie fans, such as Cine Revista (1938), Filmelândia (1951) and Cine Fan (1955). On the other hand, it documents the emergence of publications aimed at more sophisticated cinephiles, from the pioneering Filme (1949) to the influential Revista de Cultura Cinematográfica (1957). For the research of Cinema Novo films and filmmakers, little-known magazines from the early 1960s such as Cine Clube (1960) and A Tela Ilustrada (1961) are veritable gems.

Unknown even to experts
Major critics and filmmakers such as Pedro Lima, Alex Viany, Antonio Moniz Vianna, Vinícius de Moraes, Zenaide Andréa, Luiz Sérgio Person and Jean-Claude Bernardet appear in the pages of several magazines gathered in this collection, hitherto unknown even to experts. The breadth and diversity of this collection, which includes a number of short-lived publications, embody the richness and complexity of cinema in Brazilian society and culture; it will serve as an invaluable tool for historians, anthropologists, sociologists, designers, and many others.

Rafael de Luna Freire, Ph.D. (2011, Federal Fluminense University) is Professor of Brazilian Film History at Federal Fluminense University (UFF) in Niterói, Brazil. He coordinates UFF’s Audiovisual Preservation University Laboratory, dedicated to the preservation and promotion of amateur film from Rio de Janeiro state. Previously, he was Head of Documentation at the Film Archive of the Rio de Janeiro’s Museum of Modern Art. He is a founding member of the Brazilian Association of Audiovisual Preservation (ABPA) and has published widely on Brazilian cinema and audiovisual preservation.