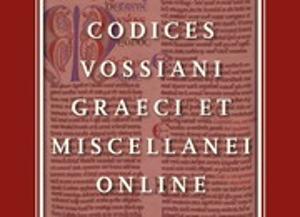 The Codices Vossiani Graeci et Miscellanei Online publishes the 174 manuscripts in Greek, and the 42 manuscripts containing both Latin and Greek, from the world-famous Isaac Vossius manuscript collection at Leiden University Library. Isaac Vossius (1618-1689) was a classical philologist and collector of manuscripts, maps, atlases and printed works; he had a particular interest in Greek manuscripts; his first publication was an edition of a Greek manuscript, and he taught Greek to Queen Christina I of Sweden during his time working at her court. This primary source collection offers, in total, 216 manuscripts comprising 27,205 leaves, giving a total number of images (including covers, spines, and fly-leaves) of c. 55,409. K. A. de Meyier’s Latin-language catalogue of the collection is available in digital format alongside the scanned manuscripts, providing users with essential information on the content, context, and physical appearance of each codex; an English-language summarised and updated version of the catalogue is also provided for each manuscript, including new and recent bibliographical references.

Isaac Vossius (1618-1689) was a classical philologist and collector of manuscripts, maps, atlases and printed works. Vossius was born in 1618 as the son of the humanist Gerard Johannes Vossius(1577-1649). In 1648, Isaac started to work as a scholar for Queen Christina of Sweden. After he had sold the famous library of his father to Christina in 1649, Vossius was appointed court librarian a year later, with the task of expanding and cataloging the library. After a stay of eighteen months in the Republic, partly forced, Vossius returned to Sweden in 1653, where he found his own book collection and the court library in great disarray. When Christina abdicated in 1654, a large part of her library was shipped to Rome. A part ofthe manuscripts and printed books was, however, taken from Christina’s library by Vossius as compensation for late payments, and for the loss of his own books. At the end of his life Vossius bequeathed his library to the children of his brother Matthaeus.

When negotiations with Oxford University had come to nothing, the heirs accepted an offer from the curators in 1690 to buy the collection for 33,000 guilders on behalf of Leiden University Library. The purchase of the Vossius library caused financial difficulties for Leiden University, but to its library it brought international fame. Especially the manuscripts proved to be of invaluable worth. The purchase of the Vossius library doubled the collection of Leiden University to c. 9,500 books. Doubles were removed from the printed books and these were auctioned in 1706. After exlibris slips had been attached to all title pages, the books were distributed over the existing collection which was grouped according to sizeand to subject. The manuscripts from Vossius (over 700 items) were always kept separately.

Issac Vossius had a particular interest in Greek manuscripts; an early publication was an edition of a Greek manuscript, and he taught Greek to Queen Christina I of Sweden during his time working at the royal court. The Codices Vossiani Graeci et Miscellanei Online publishes the 174 manuscripts in Greek, and the 42 manuscripts containing both Latin and Greek, from the world-famous Isaac Vossius manuscript collection at Leiden University Library.

The manuscripts date from the high middle ages to the early modern period, and cover a variety of subjects, including classical texts, religious writings, legal texts, historical material, and scientific, mathematical, and medical texts. The collection demonstrates in particular the transmission and reception of ancient Greek and Byzantine ideas and concepts on a wide range of subjects, from theology, to rhetoric, and to engineering.

The 216 manuscripts comprise, in total, 27,205 leaves, giving a total number of images (including covers, spines, and fly-leaves) of 55,409. The collection is enriched by detailed and updated information drawn from by K. A. De Meyier's catalogues of the codices, providing users, both students and researchers, with essential information on the content, context, and physical appearance of each codex, as well as new and recent bibliographical references.

Clicking on each manuscript shelf-mark under the Contents tab will present you with the option of three links.

The Manuscript link will lead you to images of that particular manuscript. The images offer an exact copy of the manuscript held at Leiden University Library, and include all spines, covers, and flyleaves.

The Summarized description in English link will lead you to key information on that particular manuscript, taken from K. A. De Meyier’s catalog of the Codices Vossiani Graeci et Miscellanei,published by Leiden University Press in 1955.

Further information on the Summarized description in English

The English summary is largely structured around K.A. De Meyier’s Bibliotheca Universitatis Leidensis: codices manuscripti VI: codices Vossiani graeci et miscellanei descripsit. This volume of De Meyier’s catalogue was published in 1955, and some of the details it provides, such as date or origin, have been updated accordingly, drawing heavily on the library catalogue of Leiden University and the Pinakes project.The date and origin entries have been left blank where no information is available.

1) Bibliographies: K. A. De Meyier’s occasionally cryptic references have been unpacked and presented according to Anglophone norms. The secondary literature has been updated, but priority has been given to providing details of modern critical editions and/or translations, as a way into recent scholarship. The bibliographies are not intended to be exhaustive.

2) Note that the ‘General literature’ section distinguishes works more focused on the codex as a whole, rather than particular works within it, but in many cases this is a very loose distinction.

3) Note that personal names are presented in their Latin form in this section, while Anglicised forms appear in the Author section.

1) Latin names have been Anglicised, with the authors’ dates of birth and deathadded, where possible.

2) Mythical authors, such as Hermes Trismegistus, have been omitted, and pseudonymous writers have only been included where they can be dated confidently.

3) Some authors’ names have been enclosed in parentheses: this is to indicate notable contributors who cannot be described as the author of a work, but should nonetheless be mentioned. This most commonly includes indexers and notable annotators, but also encompasses authors of overwritten works on palimpsests and, for example, Syrianus in VGF 7, whose lectures provided the basis for Hermias of Alexandria’s work.

Description: The summaries closely follow the descriptions in De Meyier’s catalog, but often includes notes which De Meyier incorporated into his description of the contents of the manuscript (e.g. details of figures, marginal scholia).

Classification: The keywords are far from exhaustive. In most cases, codices are located within abroad temporal/geographical unit such as the Roman Empire or Byzantium, and then provided with a handful of terms reflecting the major themes of the main works in the codex. This is necessary for usability, but does have the unfortunate side effect of filtering out or homogenizing more eclectic collections, and the short, fragmentary notes and works which appear in many of the codices, particularly in the VMI collection.

Provenance: This section has been left blank where De Meyier’s catalogue does not provide any information, or where he only details ownership from Isaac Vossius onwards. Dates and key details have been provided for owners, wherever possible, to make them more easily identifiable.

Missing entries: De Meyier skipped over a handful of shelf-marks in his catalogue: VGF 5 and 6 and VMI 44–46, which he described elsewhere, and VMI 33, a fragment of Aristophanes, restored to VGF52.

The Description in the De Meyier Catalog link will lead you to the description of the particular manuscript by K. A. De Meyier in his catalog mentioned above. (De Meyier’s catalog can also be found in full under the Catalog tab. De Meyier’s catalog is substantially more detailed than the summary, particularly in terms of codicological and paleographical aspects of the manuscripts. The catalog is in Latin, and so it may be most useful in accompanying detailed study of the manuscript).