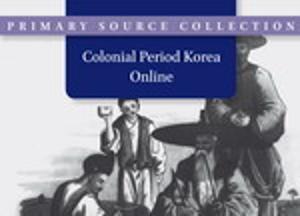 A unique collection of rare documents relating to the Japanese occupation of Korea, from the late nineteenth century up to 1945, representing a highly significant period in Korean history, and vital for a true understanding of many reflexes in the Koreas today. The collection is particularly important and timely because it preserves the intellectual content of publications which are at risk of disappearing for good.

In 1876 Japan "opened" Korea to outside contact, and subsequently sparred with China over the right of influence in Korea. This rivalry culminated in the Sino-Japanese war of 1894-95. After Japan's victory, the Japanese government steadily increased its presence and interference in Korean matters until finally, in 1910, the country was annexed outright. Korea remained a Japanese colony until the end of the Pacific war in 1945.

The collection
The present collection brings together three distinct groups of publications dating from this colonial period. It includes Japanese publications on Korea, Western (mostly English) early impressions of Korea, and Korean colonial-period literature. All materials included are drawn from the holdings of the C.V. Starr East Asian Library at Columbia University, New York. Some of the materials included are exceptionally rare. Others are rapidly deteriorating due to age, poor quality paper, and other causes. All are highly valuable (primary) sources for scholars of Korea and things Korean. The collection is particularly important and timely because it preserves the intellectual content of publications which are at risk of disappearing for good - many of these volumes are unavailable anywhere else - and because it makes rare materials more readily accessible to a larger audience.

1. Japanese publications
During the period of Japanese influence and rule, large numbers of Japanese diplomats, officials, and scholars went to Korea. Many went to rule of course, but many also went to study the country and its culture. This resulted in a substantial body of both official and scholarly Japanese publications on Korea. The publications included here cover a broad range of subject matter, from art and archaeology to the sciences, and including education, natural history, religion, rural conditions, and more. Not surprisingly, a particularly large number of the publications relate to Japan's involvement with Korea. General works on Korean history and culture are also represented in substantial numbers. The publications present a thorough insight into colonial Korea from the colonizers' point of view.

2. Western-language publications
During the period after Korea's "opening" Westerners were, for the first time, able to travel to and inside Korea. Some of these Westerners took this opportunity to observe the country, its people, and its culture and recorded their impressions of the "Hermit Kingdom." Barring one or two much earlier accounts, these are essentially the earliest Western impressions of Korea and Korean culture. Although a variety of subjects are covered in these publications, including history, religion, and more, the vast majority are written in a travelogue-like style.

3. Korean colonial-period literature
Not surprisingly, within Korea, resistance developed against Japanese rule, and resistance movements were organized. One example of resistance behavior was the use of the Korean language in publications, during a time Japanese was pronounced the official language and the use of Korean was discouraged. Columbia University's C.V. Starr East Asian Library holds a unique collection of Korean classical novels, printed in old printing type. The original texts of the collection are an invaluable bibliographical tool for researchers in the field of Korean literature during the Japanese colonial period. This was a time when there was a big increase of interest in Korean novels among the general public. Many popular works dealing with the classics were published in many different versions, with alterations which present research needs for verifying the transitions of classical works over the period. Since some of the texts are written in a very old form of the Korean language, the collection is of great interest among Korean language scholars as research sources on Korean archaic words and writing style. Their particular value, however, lies in the importance of this period, as well as in the rarity of these materials in both the U.S. and Korea.
Location of originals