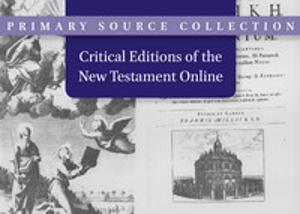 This collection, earlier published in a microfiche collection by IDC Publishers, makes available the principal critical editions of the New Testament for the first time in a single collection online, including lists of variant readings and collections of manuscript transcriptions and collations from the late seventeenth to the early twentieth century. In addition, a number of the most useful editions of the ancient versions and of ancillary materials have been included. The principal critical editions of the New Testament represent some of the highest achievements in biblical scholarship.

THE CRITICAL EDITIONS OF THE NEW TESTAMENT

THE GREEK TEXT, VERSIONS, AND TRANSCRIPTIONS OF MANUSCRIPTS

The principal critical editions of the Greek New Testament are of continuing value in biblical and textual scholarship, for the following reasons:

1. As some of the highest achievements of biblical scholarship.

2. Because they sometimes contain materials no longer available.

This series began in microfiche format, when it made available for the first time in a single place the principal critical editions, apparatus critici and collections of manuscript transcriptions and collations from the early eighteenth to the early twentieth century. In addition, a number of the most useful editions of the ancient versions and of ancillary materials were included. Now, in the twenty-first century, and nearly five centuries since Erasmus’ first Greek New Testament appeared, the same collection appears on the web.

The collection focuses on the collection of data rather than on the creation of critical editions, even though it might be argued that Lachmann is therefore an intrusion. But following this principle, the editions of William Bowyer (1763) and Edward Harwood (1776) have been omitted, along with such critical contributions as J.J. Semler’s reprint (with his own additions) of Griesbach’s Prolegomena (1764). For the pioneering editions of the sixteenth century, the user is referred to the companion microfiche set, Early Printed Bibles.

This series begins with the first extensive apparatus criticus, that compiled by John Mill and published in 1707, and ends with von Soden’s huge work of 1902-13. It thus spans two centuries of scientific and technical advance, and of manuscript discoveries. The methods that textual scholars developed during this time are parallel to those that were formulated in the collection and classification of materials in the natural sciences; as in these branches of knowledge, the story continues to unfold. These volumes thus chart a wider cultural and intellectual history. The selection of versional material is less comprehensive. It has been confined to some of the largest and most valuable editions of the Syriac and Latin versions. The materials in Parts 3 and 4 have been chosen because of their scarcity, their continuing value for scholarly research, and their significance in the development of the discipline.

The furore which surrounded Mill’s edition, with its 30,000 variant readings, and Bengel’s criticisms of the Textus Receptus, caused textual critics to be very reluctant to print anything other than that late and corrupt text. It was only Lachmann and his successors who made available a critical text. But in the way in which earlier scholars gathered their data, and often in their comments at the foot of the page, we may see how palaeography and textual criticism advanced to the point where the text itself could be revised on the basis of extensive knowledge and lengthy reflection. For the reader who wishes to follow this story more carefully, there are a number of writers who have charted the lives and careers of the editors of the works within this collection. Foremost in interest is S.P. Tregelles’ An Account of the Printed Text of the Greek New Testament; with Remarks on its Revision upon Critical Principles, London, 1854. Then there is the lengthy account in the second volume of F.H.A. Scrivener’s A Plain Introduction to the Criticism of the New Testament, 4th edition, edited by E. Miller, Cambridge, 1894. A similar pattern is followed, more briefly but more recently by B.M. Metzger and B.D. Ehrman, The Text of the New Testament. Its Transmission, Corruption, and Restoration, 4th ed. New York and Oxford, 2005.

Two indispensable bibliographical works are also provided. The first is E. Reuss, Bibliotheca Novi Testamenti Graeci, Strasbourg, 1872. Reuss’ work contains both a catalogue of nearly six hundred separate editions (as well as many reprints), and an analysis of the text of the editions in 1,000 text passages. The other tool is T.H. Darwell and H.F. Moule, Historical Catalogue of Printed Editions of Holy Scripture in the Library of the British and Foreign Bible Society, Vol. 2, Polyglots and languages other than English, Part 2, Greek to Opa. London. 1903. Reprinted New York. 1963.

The development of a simple and concise means of indicating witnesses has been slow. It is simple enough for versions, where Aethiop. or Copt. are self-explanatory, and for fathers, where the name either in full or abbreviated cannot be mistaken. But it is the great bulk of evidence, the Greek manuscripts, that it has taken the longest to express both clearly and succinctly. Mill abbreviated manuscript names that were generally derived from the library housing them, such as Alex., Vat. Wettstein introduced the use of letters, and Gregory gave us the numbering system modified by Aland (hence its name of Gregory-Aland) which is in use today. The development of the system since Gregory was detailed by J.K. Elliott, A Bibliography of Greek New Testament Manuscripts (2nd edition, Society for New Testament Studies Monograph Series 109; Cambridge University Press, 2000), pp. 5ff. The use of databases has led to further developments, and researchers now use a six digit number for all manuscripts. This and other contemporary research is described in D.C. Parker, An Introduction to the New Testament Manuscripts and their Texts, Cambridge, 2008.

It is not always so easy to work out how the symbols used by different editors relate to one another, so I have provided the following tables, relating the indicators of Greek manuscripts. The first is of the sixteen witnesses cited by Stephanus in his edition of the Greek New Testament 1550, available in the microfiche series Early Printed Bibles. It is the first edition to contain variant readings. The sixteen witnesses are each cited by a Greek numeral. For ease of consulting the data in Scrivener’s Plain Introduction to the Criticism of the New Testament (London and New York: George Bell and Sons, 1894, Vol. 2, 189-191), I provide his designations as well as the Gregory-Aland numbers (and the letter). (Scrivener’s nomenclature is also elucidated by S. Kubo, ‘Identification of Scrivener’s Collated Manuscripts’, Andrews University Seminary Studies 16 (1978), 297-400.)

The second table shows how the system evolved from Stephanus, through Mill and Wettstein to the current numeration. I have not included Tischendorf and von Soden, because there are already tables relating them to each other and to the Gregory-Aland system: Benedikt Kraft, Die Zeichen für die wichterigerren Handschriften des griechischen Neuen Testament, 2nd ed., Freiburg/B., 1934; K. Aland, Kurzgefasste Liste der griechischen Handschriften des Neuen Testaments (Arbeiten zur neutestamentlichen Textforschung 1), Berlin, 1963 and 2nd edition, Berlin, 1994.

EQUIVALENTS OF THE MAJUSCULES TO GREGORY-ALAND NUMBERS

1. Formerly Dabsl. All Gregory-Aland numbers with an Abschrift indicator have now been assigned their own number.

These tables are not exhaustive. But it is hoped that they will enable the user to begin to handle unfamiliar apparatus critici.

Scholars today are familiar with more manuscripts than anyone has been since the New Testament texts were first penned. A knowledge of this rich tradition is further enriched by an awareness of the last three centuries of critical study. This collection will enable the modern scholar to achieve that knowledge.

Part One: The Greek New Testament