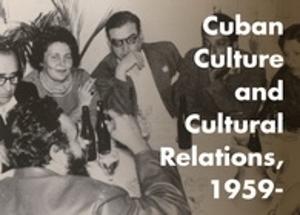 Primary-source collection of ca. 45,000 fully-searchable documents from the Casa de las Américas in Havana, documenting the culture and cultural relations of Revolutionary Cuba and countries in Latin America and the Caribbean.


This collection gives access to 545 folders from the archives of Casa de les Americas in Havana, Cuba. Main sections in the collection are:

Clicking on the name of the section will start a search that lists all available folders of that section.

Casa de las Américas in Havana, Cuba, ranks among the most renowned cultural institutions in Latin America and the Caribbean. Ever since its creation in 1959, it has been a host to thousands of writers and artists from throughout the region. It has published countless books and articles, organized conferences, concerts, expositions, theatre productions and numerous cultural contests. Founded just three months after the Cuban Revolution, it quickly became a fundamental link between the cultural vanguard in Latin America and the Caribbean on the one hand and a diplomatically isolated Cuba on the other. Over the course of almost six decades it has amassed a vast amount of information, thus creating a unique record to study the history of both the institution itself as a cultural hub, but also that of the protagonists of a remarkable era.


Much of the information is preserved in the present “Casa y Cultura” section of the so-called Archivo Vertical at Casa de las Américas library. This section contains some 45,000 documents organized in 545 folders, covering such diverse materials as articles, newspaper clippings, cable messages, interviews, conference memorabilia, etc., collected from 1959 onward. Together they document the activities of the institution both in Cuba and beyond, bearing testimony to the conflicts and passions of a turbulent time. Conferences and controversies, manifestos and open letters combine to shed a light on a vibrant cultural history, which is now accessible for the first time from new and unexpected angles.

The archive’s genesis was somewhat random; it started out collecting newspaper clippings (an external agency was in charge of compiling them) in order to keep track of the various activities of the Casa de las Américas. Gradually the collection began to grow as donors and librarians from different countries sent press clippings and other documents to the institute. Employees and researchers at the Casa itself contributed as well. Much of this constitutes ephemeral material, difficult to obtain as it derived from non-indexed sources (e.g. newspaper clippings) or consisted of unpublished articles (e.g. press dispatches). The employees at Casa de las Américas would use these documents for their own information or they would serve as promotional material for the different departments within the institute. Once they had served their purpose they would be sent to the library to be archived. In some cases there are notes in the margins or senders’ requests, an interesting aspect when we consider the importance of some of its authors.

Among the many documents, the programs of the monthly events at Casa de las Américas stand out ( Programa del Mes). They allow us to establish a record of all public activities organized by the Casa since its founding. Other documents give insight in the plethora of colloquiums, meetings and conferences where intellectuals and artists from across Latin America and the Caribbean met. Here we find information about such illustrious figures as Miguel Angel Asturias, Alejo Carpentier, Fernando Benitez, Carlos Fuentes, Miguel Otero Silva, Simone de Beauvoir, Jean-Paul Sartre, Dario Fo and Mercedes Sosa, to name but a few. We also find information about the different departments of the institute: Theatre, Music, Visual Arts, Centre for Literary Research, Centre for Research on the Caribbean and Study Guides (on women, Latinos in the United States, cultures of Latin America and people of Afro-American descent). Also highly significant are the extensive files on the famous literary prize of the Casa de las Américas: the Premio Literario Casa de las Americas, which is by far the oldest and most ambitious one in the region.

Finally, the present section of the  Archivo Vertical contains records about Haydee Santamaría, one of the most renowned women of the Cuban Revolution and the founder and president (until her death in 1980) of Casa de las Américas.