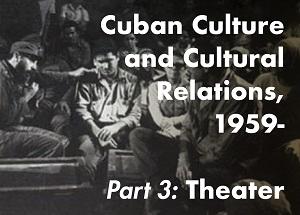 This primary source collection documents the history of theater in Latin America and the Caribbean, with a special focus on Revolutionary Cuba. In addition, there are files about countries on other continents, such as the Soviet Union, the United States (with a focus on Latino and Chicano theater), and various countries in Europe and Africa. The collection covers theater groups, festivals, performances, and persons (actors, playwrights, directors). The collection is scanned from the so-called “vertical archive” at Casa de las Américas in Havana, Cuba.


A Paper Treasure
Rigorously accumulated, carefully preserved and meticulously cataloged, the theater collection at Casa de las Américas in Havana is a unique paper treasure. Amassed in over six decades, it is a source of immeasurable value for students and researchers as well as journalists, critics and cultural managers. The collection covers not only Cuba but the whole of Latin America and the Caribbean and even beyond.

Content
Clippings from newspapers and magazines – from announcements to reviews – coexist with telexes, photographs, design sketches, brochures, and catalogs. There are dossiers on theater groups and shows, allowing researchers to reconstruct the history of individual directors and performers as well as groups and artistic fashions. In addition, the programs of thousands of premieres are in themselves valuable objects. Often designed by notable artists, they offer an insight into design trends and their development over time.

Organization
The archive is organized by country. Within each folder there is a great thematic diversity, ranging from theater groups and personalities (actors, directors, playwrights, designers, musicians, etc.) to puppets, children’s plays, circuses, and festivals. The time range is wide, with the oldest document dating from 1951 and the most recent one from 2018.

Geographic Coverage
The archive covers a total of thirty-five countries. Cuba is of course represented best, with folders on its National Theater, the theater activities at the Casa de las Américas, the Latin American and Caribbean Meetings of Theater Makers in the 1960s, the Carifesta Festival, and the International Theater School of Latin America and the Caribbean (EITALC). All other countries in the region are covered, from Argentina to Venezuela. One bulky folder is dedicated entirely to the famous Teatro La Candelaria in Bogotá, Colombia, founded in 1966 by Santiago García. The archive also includes folders on the United States and Canada, with the former focusing on Latino and Chicano theater. Other folders offer documentation on various European countries and the former Soviet Union. One folder deals with African theater.

The Theater collection complements the journal Conjunto, which was founded by the Guatemalan intellectual Manuel Galich in 1964 and is published by Casa de las Américas. The digital edition of Conjunto is forthcoming from Brill in 2021.