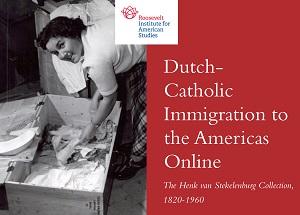 Henk van Stekelenburg (1929-1999) was a prominent Dutch historian who worked mostly on Catholic emigration from the Dutch region of North Brabant to North America. This collection includes his manuscripts and detailed descriptions of the most relevant archival materials that he consulted. It also offers personal correspondence, research notes, interviews, bibliographical references, genealogical information, immigration records, and illustrations about Dutch-Catholic immigration to the US and Canada from 1820 to 1960. This collection comprises 13,081 scans and is part of Transatlantic Relations Online: Digital Archives of the Roosevelt Institute for American Studies, which is the result of ongoing cooperation between the Roosevelt Institute for American Studies and Brill.

Henk van Stekelenburg (1929-1999) was a prominent Dutch historian. He completed his studies at Radboud University in Nijmegen and was a lecturer at Xaverius College in Vught. In 1976, on the occasion of the celebration of the bicentennial anniversary of the American Revolution, he published his first article on Catholic emigration from the Dutch region of North Brabant to North America. Later, he published a pioneering trilogy on the subject of Dutch emigration to the New World, and his opera, consisting of more than 30 articles and several books, have been widely recognized as being among the core contributions to this field of study.

The collection includes van Stekelenburg’s manuscripts, detailed descriptions of relevant archival materials that he consulted, and personal correspondence. It also includes research notes, interviews, bibliographical references, genealogical information, immigration records, correspondence, and illustrations about emigration from the southern part of the Netherlands to the US and Canada from 1820 to 1960.

The study of Dutch Catholic emigration to the US is not only crucial to gaining a better understanding of Dutch national history, but it is also relevant for the exploration of the longer history of transatlantic crossings. Migration and, more generally, people’s social mobility have been part of the Dutch cultural milieu, civic ethos, and political debate for centuries. The breadth of the Dutch colonial empire facilitated inter-cultural and cross-cultural exchanges, and it also favored massive migration waves in the post-colonial era. On top of that, the Netherlands has consistently represented, throughout its history, a relatively safe haven for political and religious refugees, from Jews to political dissidents. However, such an inclination to inclusion and tolerance has led scholars to concentrate mostly on the incoming migration whereas Dutch emigration to the Americas, Australia, and New Zealand has been largely under-explored.

It is this gap that this collection helps to fill. In particular, the focus on van Stekelenburg’s cultural production and on Catholic emigration further enriches the history of the motivations that induced Dutch people to leave their country and at the same time sheds new light on the social composition of Dutch emigrants, the reaction of their governments, and the many social organizations that helped them.[1]

Further research drawing on the documents of this collection may expand the work of Dutch historian G.T.J. Delfgaauw, whose 1953 Emigratie als bijdrage tot vermindering van de bevolkingsdruk is largely framed around an economic perspective.[2] Delfgaauw argues that emigration mainly helped the Netherlands to overcome its recurrent economic crises. Such a compelling argument, however, leaves out long-term discourses of religious identity and tends to avoid personal motivations and expectations that may have induced Dutch Catholics to emigrate, an element that the van Stekelenburg collection helps to investigate in more detail.

Among the documents, for instance, a detailed account of the trip that a Dutch family from Uden made in 1848 reveals the hardship of the Dutch countryside in the middle of the 19th century and sheds light on the prospects driving the Dutch emigrants, as well as on the communitarian spirit pervading them. At the same time, these kinds of documents show the central role played by pre-existing Dutch-American networks and churches in fostering newcomers’ inclusion and the rapid socio-economic rise that they usually achieved in the United States. [Document]

Similarly, this collection complements Dutch sociologist Barend Peter Hofstede’s assumption that Dutch post-war emigration was mostly affected by an “overpopulation psychosis.”[3] Hofstede reads the large-scale immigration to North America as a function of social and psychological phenomena characterizing the post-war Dutch public debate. The documents of this collection are crucial to establishing a clear link between religious identity and the widespread, post-war attitude affecting specific social groups in the Netherlands.

In addition, this collection invites new scholarship along the lines of William Petersen’s analysis, which highlights the role played by the Dutch post-war governments in supporting a massive emigration to North America.[4] The collection brings in the voices and perspectives of non-state agents and provides further examples of the non-linear processes of assimilation they had to go through once settled on the other side of the ocean. [Document]

Finally, the documents of this collection reveal the emphasis on cultural propaganda, conceived as an effective means of spreading a certain range of ideas among a large and well-defined target audience, that characterized the phenomenon of Dutch Catholic emigration to North America. In doing so, this collection opens the field to further inter- and multi-disciplinary studies on the ways in which Dutch popular media, including radio, the press, and cinema, introduced and framed the numerous possibilities of overseas migration.