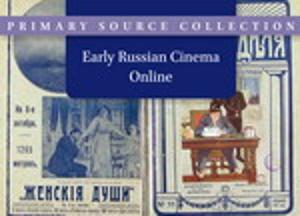 This unique collection of Russian film periodicals from the last tsarist decade includes both sophisticated and more popular periodicals released by the major Russian film studios. Containing interviews with movie stars and now irretrievably lost screenplays, these journals will prove an invaluable source about the silent movie era and Russia's entertainment industry at the eve of the Revolution.

Cinema in late-imperial Russia
In a quantitative sense Russia's cinematographic press comprises a modest segment of the general stream of the Russian periodical press at the beginning of the 20th century. However, in the dynamic of its development, the tempo of its reproduction and distribution, it far outstripped publication of all other contemporary genres and directions, and in this fact alone vividly reflected the general popularity of cinema in Russian society. In view of the fact that the documents connected with the history of the early Russian cinema and the overwhelming majority of materials on film have not survived up to this time, these publications constitute a unique collection of testimonials about the general and particular characteristics of the Russian cinematographic press of the 1900s and 1910s.

The art of the new age
The pages of these cinematographic publications have preserved for history not only the first examples of cinema theory, but also a very wide range of reflections of the artistic consciousness of the art of the new age. They chronicled all the variety and individual details of the cinematographic life of the Russian capitals and provinces, recorded consecutively the growth of cinematography in the cultural life of the country. The publications dedicated to the screen carefully documented the dynamic of the development of film production and distribution, traced the actions of the authorities in controlling screenings and noted all other accompanying factors and circumstances affecting the establishment of the new art.

The collection
Examining these sources, the researcher can reconstruct the film repertoire and assemble almost a complete list of domestic and foreign films shown on screens in Russia; he will find in them a detailed description of pictures, reviews by critics, censored materials, etc. In addition, they contain extremely valuable information about other forms of contemporary entertainment culture - the theater of miniatures, cabaret and music hall.
This unique collection of Russian film periodicals published during the last decade of the tsarist regime includes sophisticated, bimonthly periodicals as well as more popular weeklies released by major Russian film studios, distributors, and theater owners. These journals – which contain, for example, interviews with movie stars and screenplays that are now irretrievably lost – will prove an invaluable source of information for anyone interested in the history of the silent movie or in the Russian entertainment industry on the eve of the Revolution.
The collection demonstrates developments of cinematic forms and devices that enriched popular culture in pre-Revolutionary Russia. It vividly illustrates the flexible reception of cinema and its social transformation from a single technical invention into a national art form, and provides an adequate and comprehensible panorama of Russian film culture in the twilight of the tsarist era.

Unique Sources
By examining the materials in this collection, the researcher can reconstruct the film repertoire and assemble almost a complete list of domestic and foreign films that were shown on screens in the country. The researcher will find in them a detailed description of pictures, reviews by critics, censorship materials, chronicles of film production, advertising, etc as well as valuable information on other forms of entertainment culture of the era. The new collection offers unique materials on the culture and history of Russia, which no modern historian can afford to ignore.

Cinema in Russian Society
In a quantitative sense, Russia’s cinematographic press comprises a modest segment of the general stream of the Russian periodical press at the beginning of the twentieth century. However, in the dynamic of its development and in the tempo of its reproduction and distribution, it far outstripped publication of all other contemporary genres and directions, and this fact alone vividly reflects the general popularity of cinema in Russian society. Because neither the documents connected with the history of the early Russian cinema nor the overwhelming majority of materials on film have survived, these publications constitute a rare collection of testimonials about the general and particular characteristics of the Russian cinematographic press of the 1900s and 1910s.

Rapid Growth of the Cinematographic Press
The Russian cinematographic press was short-lived: The “trial” issue of Sine-Fono. Zhurnal kinematografii, govoriashchikh mashin i fotografii (the cover of each issue was adorned with the momentous motto “I'll Show You the Right Way”) first appeared on October 1, 1907, and the last issue of magazine Proektor is dated September 1918. The Russian cinematographic press evolved rapidly during this period of just less than twelve years. It arose as an informational intermediary between film producers and the authorities who oversaw the repertoire and its distribution, but soon outgrew these narrow limits and became an influential branch of journalism that attracted many distinguished authors to its pages.

The Establishment of a New Art Form
The new collection comprises a wide range of cinematographic periodicals that were published in Russian capitals (St. Petersburg, Moscow) or Russian provinces (Riga, Revel, Yekaterinburg, Rostov-on-Don) in the first decades of the twentieth century. Its publishers recorded a wide range of cinematographic life, including its general trends, special hot issues, and specific local aspects, which marked the growth of cinematography in the cultural life of the country. The film publications carefully documented the dynamic growth of film production and distribution, traced the actions of the authorities in controlling screenings, and noted many other factors and circumstances that affected the establishment of the new art form.
In addition, these publications contain rare information on other forms of entertainment culture of the time – the theater of miniatures, cabaret, circus, and music hall – that had flourished in Russia since the early 1910s.

Specialist Journals and Mass Publications
The Russian film press in the period 1907-1918 is distinguished by its remarkable variety of publications. Some of them focus on general issues of the film business and were aimed at industry professionals, distributors, and theater owners ( Sine-Fono, Sinema Pate, Nasha nedelia, Ekler Zhurnal, Svetopis`, Kino, Kinokurier), while others deal with technical innovations ( Novosti grammofona) or are devoted to the interests of professional groups of film workers ( Akter). From its very beginning, the Russian film press launched a large number of publications that were clearly oriented toward the interests of ordinary film viewers ( Vestnik zhivoi fotografii, Elektra, Kinemakolor, Kinematograf, Kinematograficheskyi teatr, Ekran i stsena). Its very existence demonstrates the popularity of cinema among the Russian population.

The last (but not least) part of the new collection presents the non-commercial cinematography of Russia, which effectively served the goals of general education and enlightenment of lower classes (i.e., the workers and peasants). The ´popular readings´, which formed a numerous and devoted audience, were widespread throughout the country from the early 1910s. The magazine Razumnyi kinematograf i nagliadnye posobiia was the first pedagogical journal to attempt to integrate film into the educational system. It contains important data on both the practice and its repertoire.

The End of the Era
The First World War was a serious ordeal for the Russian film-making industry and its publishing business. Wartime deficits led to the closing of many publications, and although new ones appeared in their stead, most were just as short-lived.
War and revolution put an end to the history of Russian cinema journalism. All such publications were closed down in the summer of 1918 by the newly established Soviet censorship. A special publication of Kino-Biulleten became a kind of epitaph for both the cinematographic press and the whole Russian film production. Experts of the Film Committee – which was under the People’s Commissariat of Enlightenment – reviewed films of the pre-Revolutionary repertoire, judging not so much their artistic merits, but mainly their ideological coherence, thus defining their future public screenings. For the next seven decades, the cinematographic press in the country was transformed into a component of the state cinema and served the interests of Soviet ideology and politics.
Location of originals