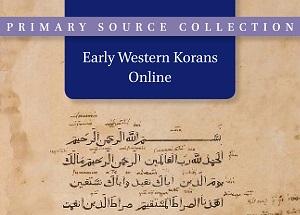 This remarkable collection demonstrates the impact of the holy book of Islam in Europe. Long before printing with movable type became common practice in the Islamic world, Korans had been printed in Arabic type in several European cities. The collection includes Korans and Koran translations, printed between 1537 and 1857, and is of interest to book historians, theologians, philologists, and scholars of Islamic Studies alike.

The first printed Koran
The Venetian printer Alessandro Paganini produced the first Arabic Koran in 1537/38. For a long time it was thought to be lost, and the rumor was that the Pope had the complete print run burned. Certain literary sources, however, have revealed that at least two scholars owned copies of this Koran and quoted from it or explicitly mentioned the Arabic printing type created for it. One of these copies has since been found and is now for the first time accessible through this microfiche collection. The Paganini edition is exceptional, as it was probably intended not for European scholars but for export to the Ottoman Empire. The abundant errors and poor appearance of the type, however, ruined all prospects of success for this Koran edition. Presumably, the copies published were confiscated and destroyed by the Ottomans. While this Koran remains an impressive symbol of the boldness of Venetian book printers, it also demonstrates that conditions were still inadequate for producing a reliable scholarly text and typography. That stage would not be reached for over a century.

Other European Korans
The heyday of Biblical scholarship following the Reformation, at both Protestant and Catholic faculties, led to considerable progress in Oriental philology. Combined with the improvements in Oriental typography, especially at centers such as Leiden and Rome, the conditions were met for publication of the first two authoritative Occidental Koran editions, which appeared in quick succession in the 17th century.

The Hamburg Koran edition produced by Abraham Hinckelmann in 1694, based on his substantial collection of Arabic manuscripts, was intended purely as a basic philological study, as is apparent from the absence of a translation. On the other hand, the edition published by Ludovico Marracci in 1698 primarily served theological purposes. Marracci included both an extremely accurate Latin translation (which was published separately in a smaller edition in Leipzig in 1721) and excerpts from Arabic commentaries in the original text (as well as translations of these excerpts). He concluded by writing an extensive theological refutation.

The edition that appeared barely a century later, in 1787 in St. Petersburg, was published for political purposes. As a gesture of religious tolerance Tsarina Catherine II aimed to grant the new Muslim citizens of Turkish descent easy access to their holy book. This edition, later reprinted in several versions in Kazan, was the work of Muslim scholars, who added textual readings of the Koran text and excerpts from commentaries. It achieved a limited impact. Very few copies reached Western Europe, and in the main Islamic countries in the Near East they did not prevail over the lithographic editions featuring fine calligraphy, which appeared in Iran, the Ottoman Empire and India from the early 19th century onward. These major Oriental editions will be included in the a subsequent installment.

The edition published by the Orientalist Gustav Flügel in Leipzig in 1834 permanently influenced the course of Koran studies in the West. Until the publication of the 'official' Cairo Koran edition in 1923, Flügel's text was the foundation of modern Koran research and the basis for several new translations into European languages. However, Flügel's edition did have its shortcomings, primarily denounced by Islamic scholars. An example of this is the verse numbering, which deviated from traditional Islamic numbering in many respects.

The oldest Koran translation
The oldest Koran translation preserved dates from 1143. At the request of Peter the Venerable, abbot of Cluny, it was prepared in Toledo by the polyglot British scholar Robert of Ketton (Robertus Ketenensius, mistakenly referred to as Robertus Retenensis or Robert of Chester). He was assisted by a native Arabic speaker. Several manuscripts reflect the significance of this Latin translation for Western involvement with Islam. Exactly four centuries after the translation originated, it was prepared for publication by the Zurich theologian Theodor Bibliander. In 1543, after fierce debate and mediation on the part of Martin Luther, it was issued by the famous Basle publishing house of Johannes Oporinus. The huge demand for this work led to a second printing seven years later.

Vernacular translations
The impact of this old Toledan Koran translation lasted half a millennium. It provided the source for the first translations into Italian, German and Dutch. In 1647 the first vernacular translation directly from the Arabic appeared in Paris. It was a French translation by the Orientalist and diplomat André du Ryer. Throughout the Enlightenment, this was the leading and most popular translation, published in dozens of different editions in various publishing centers in France, the Netherlands and Germany. Our collection features only the most important editions. Du Ryer based his translation on the interpretation of the two most popular Sunni commentaries. Even the essentially superior English translation by George Sale (London 1734), which continues to be praised for its linguistic style, did not replace du Ryer's translation overnight. The improvement of Sale's edition compared to du Ryer's is its lengthy 'Preliminary Discourse', offering readers detailed and reliable information about pre-Islamic Arabia and the origins of Islam.

The first German translation based on the original appeared in 1772. By 1850, three additional German translations had appeared, all deeply inferior to the English translation. On the other hand, the two new French translations by Etienne Savary (1783) and Kazimirski (1840) were a significant improvement over du Ryer's work in terms of textual interpretation.

Selections
Thus far, we have mentioned only complete editions or translations. Yet the microfiche collection also incorporates some selections (mostly bilingual) of scholarly significance, as the following two examples illustrate. The first is the bilingual edition of the Joseph Surah (Surah 12) by the leading Dutch Orientalist Thomas Erpenius, published in Leiden in 1617. In addition to the Arabic text in flawless Erpenian type, Erpenius provided an accurate and literal Latin translation. As a contrast, he also included the deeply unsatisfactory Toledan translation from Bibliander's Koran edition. Erpenius' edition was intended as exercise material for the Arabic grammar he had published earlier.

In 1701 the Orientalist Andreas Acoluthus from Breslau published a specimen for a polyglot Koran, in which he printed the text of Surah 1 in Arabic, Persian and Turkish with the respective Latin paraphrases, followed by an extensive Latin treatise on the Koran. Acoluthus was far ahead of his day with this project. Unfortunately, his plan never fully materialized.

Like the edition published by Erpenius, most of the other bilingual partial editions were intended as exercise material for people learning Arabic. There editions reflect the uneven progress in Arabic typography: the awkward woodcut type by Johannes Zechendorff (Zwickau 1646) contrasts sharply with the near-perfect types of the various Leiden editions of Erpenius (1617) and Nissel (1655). All the partial editions selected here attest to the European typographical history of the Arabic.

This collection
This collection contains all Arabic Koran editions printed in Europe before 1850, as well as all complete translations directly from the Arabic (until about 1860). Among the secondary translations, only those into German and Dutch are offered completely. Other translations will follow in the third installment, which will also feature several variants of the first published Latin translation of the Koran from 1543. Of the partial editions, only the typographically or academically most interesting ones are presented here.