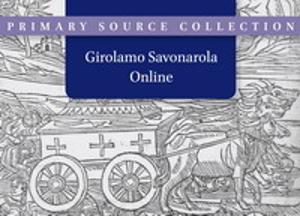 Girolamo Savonarola (1452-1498) was among the first authors of the late 15th century to acknowledge the importance of printing as a means of propagating his ideas. Many regard him as one of Luther's predecessors. This edition contains the complete incunabular section of the Stuttgart collection, offering over 200 incunables of interest to theologians, historians, art historians, and book historians.

Biography
Girolamo Savonarola came from a respected and affluent family that had originally resided in Padua. He was born on 21 September 1452 in Ferrara, where his grandfather Michele Savonarola was a physician at the court of the Este and a Professor of Medicine at the university. Encouraged by this grandfather, who until his death in 1468 was consistently involved in the raising of his grandson, Girolamo decided after finishing his liberal arts schooling to study medicine.

When he was around twenty, however, he developed an aversion to secular life. In the spring of 1475, he secretly left the house of his parents and joined the Dominican monastery in Bologna. In 1479, his superiors sent him back to Ferrara to study theology and subsequently (1482) to Florence to preach. In the years that followed there, he wrote his first sermons, which were never published. After a few years absence from Florence Savonarola's historic career began in July 1491 when he was elected prior at the monastery of San Marco. He soon became highly respected among the lower and middle classes in Florence for his rousing penitential sermons. Following the death of Lorenzo de'Medici in April 1492, Savonarola became politically prominent in Florence and started to consider setting up a theocratic regime in this city.

Theocracy
After the de'Medicis were driven out of Florence in November 1494, Savonarola and his supporters obtained political control over Florence. Under his aegis, a new constitution was already drafted for Florence in 1494. Savonarola planned comprehensive public and private reforms. In his sermons he fulminated primarily against the rampant extravagance in Florence and against the general moral decadence. When he then denounced the moral misdemeanors of the church and especially of the contemporary pope in his speeches and writings, he was dismissed by the Church of Rome and excommunicated by Pope Alexander VI (1492-1503) on 13 May 1497.

Thanks to his many supporters, however, he nonetheless remained in office until the spring of 1498. On 8 April of that year he was arrested. He was tried in Florence and sentenced to death. On 23 May Savonarola was publicly hanged in Florence and burned at the stake. Although his personal conduct was beyond reproach, he became a victim of his own doing because of his misassessment of his power and of the forces against him in the Church of Rome and in Florence.

Savonarola's Works
Savonarola published extensively in the few years since his election as prior of San Marco and especially since the start of his rule over Florence. Savonarola was among the first authors of the late 15th century to acknowledge the importance of printing as a means of propagating his ideas. From 1492 until his death, nearly every word he expressed in public and every text he wrote was printed immediately.

In barely eight years of working in Florence, Savonarola became by far the most widely published 15th-century author during his lifetime. At his peak from 1494 until the spring of 1498, no fewer than 100 editions of his sermons and tracts were published in Florence alone. Virtually all late 15th-century Florentine printers disseminated his writings, most of all Bartolomeo de'Libri, who was responsible for about half of all editions, as well as Francesco Bonaccorsi, Antonio Miscomini, Lorenzo Morgiani, Johannes Petri and Piero Pacini - the latter solely as a publisher.

Printing helped spread Savonarola's message well beyond Italy during his lifetime. Savonarola's own Latin version of one of his most influential works, originally composed in Italian as <i>Compendio di rivelazioni</i> (1495), was reprinted successively in Paris and Ulm by August 1496.The rise of Florentine book illustrations is closely linked with the dissemination of Savonarola's writings, since most contemporary editions feature at least one decorative woodcut.

Inspiring Luther
One generation after Savonarola, the reformation movement instigated by Martin Luther in Germany also made extensive use of printing to disseminate its doctrine and ideas. To this day, Savonarola is regarded in many respects as one of Luther's predecessors (albeit an unsuccessful one). Whereas Savonarola tried to gain political control of his immediate surroundings as well - and ultimately failed - Luther pursued religious-theological ambitions that were all the more effective in this respect. One sign that Luther regarded Savonarola as a kindred spirit and champion of the same cause despite all the differences was that he arranged a reprint (Wittenberg, 1523) of Savonarola's last two psalm interpretations written immediately before his conviction and execution. Luther added a very favorable preface to it. The reformation movement certainly helped some of Savonarola's writings (including his psalm interpretations) remain especially popular outside Italy well into the 16th century and keep being reprinted.

Collectors
Although Savonarola's writings were banned by the Catholic Church and placed on the Index of Rome (which explains why some are so rare), the original Florentine editions, generally decorated with woodcarvings, interested book collectors very early on. The Florentine scholar Antonio Magliabechi (1633-1714) was one of the first private book collectors to own a vast collection of early Savonarola editions, most of which became part of the Biblioteca Magliabechiane that he founded in what is now the Florentine National Library.

The Stuttgart collection
The first person who tried systematically to obtain a complete collection of contemporary Savonarola editions was undoubtedly the Abbé de Rulle from Nancy. His collection of largely Italian incunabula, which aside from the Savonarola collection comprised a substantial collection of Dante's and Petrarca's works, was acquired by Duke Carl Eugen von Württemberg in 1786 for the ducal public library he opened in 1765 (now the Württembergische Landesbibliothek).

This collection
This collection contains the complete incunabular section of the Stuttgart collection, including all multiple copies, which in this case are not superfluous padding but are a true complement. After all, many early editions were mutilated by the religious censor. These alterations are identifiable only by comparing several copies with small variations and deviations within the same edition. This collection also comprises the post-incunabula of the Savonarola collection, which are still described in the literature as incunabula, as well as writings attributed to Savonarola, such as Il novo cortegiano. Thus, the collection offers primary sources of relevance to theologians, historians, art historians, and book historians.