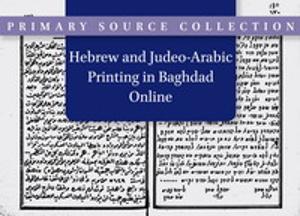 The world’s foremost private collection of early and rare Hebraica housed in the Valmadonna Trust Library is the basis for this collection. It comprises a resource for the study of oriental printing, Hebrew liturgical history, Judeo-Arabic literature, and the history and culture of the most ancient Jewish Diaspora community. All of these bibliographic treasures are reproduced here for the first time.

Printing in Baghdad
The Hebrew press in Baghdad was one of the last Hebrew presses established in the Orient. In the 1860s a journal and a few books were produced by lithography, among them Masa'ot shel Rabi Binyamin [the medieval travelogue of Benjamin of Tudela], one of the lengthiest lithographic books ever printed in Hebrew. Before 1870, movable Hebrew type was introduced by a printer trained in Bombay, and Baghdad became the most prolific center of Hebrew printing in the Orient after Jerusalem and Istanbul. Over the course of 75 years, the Hebrew printers of Baghdad issued over 400 books and pamphlets.

Early printers
Most active of the early printers was the scholar and entrepreneur Solomon Bekhor Hutsin (1843-1892), who began as a bookseller. (Hutsin's catalogue of 1872 was the first Hebrew bookseller's catalogue printed anywhere in the Orient.) In 1888 Hutsin launched a new press using type from Leghorn, Italy, an international center of Hebrew printing. Hutsin's more than 70 books, which stand out in aesthetic and content from those of his predecessors, include liturgical works for local use, some older Baghdadi writings, and reprints of Hebrew books first issued in India and Europe.

Dangoor printing house
With permission of the Sultan, a new Hebrew printing house was established in 1904 by Ezra Reuben Dangoor (1848-1930), a native of Baghdad who had served as rabbi of Rangoon in Burma. Dangoor, who also used presses and type imported from Europe, was the most productive of the Baghdad printers, issuing over 100 books largely edited by himself. During the British Mandate, several new Hebrew presses were established, notably El Wataniyah Israiliyah, and the press of Elisha Shohet which functioned until 1940. A small number of Hebrew and Judeo-Arabic books were printed during and after the War.

Special liturgies
The Hebrew printing at Baghdad covers a limited range of traditional Jewish literature, especially hagiographies and liturgical texts, perhaps the widest variety of special liturgies ever issued in a single Hebrew printing center. The Baghdad imprints also comprise a rich resource for Hebrew liturgical poetry and related poetic compositions ( piyutim), which are often incorporated in non-liturgical works. There are many editions of the Mishnaic treatise Avot and of the Passover Hagadah, most with Judeo-Arabic sharh.

Works printed at Baghdad are almost all of Iraqi or oriental authorship. Local authors include the rabbinic scholars Joseph al-Hakam, Abdallah Somekh, and Solomon Twena, who later settled in India and founded a press at Calcutta where he printed over 70 books. A few works of Ashkenazic origin include segulot by a Hungarian rabbi and two ethical tracts by Lithuanian maskilim, reprinted from European editions. The many secular works include communal regulations, fables, Hebrew language texts, calendrical treatises, eulogies, as well as historical writings and storybooks, mostly in Judeo-Arabic, among them extracts from the Arabian Nights, tales of Sindbad the sailor, and an account of the House of Rothschild.

Languages
Baghdad was one of several dozen towns where Judeo-Arabic was printed, and the most important center of Judeo-Arabic printing after Tunis. Aside from books entirely in Hebrew, a large proportion of the Hebrew-titled books contain some text in Judeo-Arabic. Over 75 of the Hebrew-character books are entirely in Judeo-Arabic, or explicitly in Arabic in Hebrew characters. The Hebrew books are printed in either square or 'Rashi' (cursive) characters, but the Judeo-Arabic books are almost all in square characters, in a few cases with vowel points, useful for pronunciation of Baghdadi Judeo-Arabic. One Judeo- Arabic book was sponsored by a woman. Aside from books in Hebrew and Judeo-Arabic, there are several Aramaic targums and the Zoharic Idra zuta and Idra raba. There is one edition of the Passover Hagadah with Judeo-Persian translation.

Ornament and Format
Like other Hebrew books from the Orient, those printed at Baghdad bear minimal ornamentation. Among ornamental devices are a bird on a tree, a basket of flowers and fruit, a cluster of grapes, and the royal Turkish arms. A few woodcut illustrations include a man blessing wine, a sailboat, a table laden with fruits and vegetables. One volume displays the smoke and smokestack of a locomotive, a symbol of the railroad linking Baghdad with other parts of the Ottoman Empire. A few books contain portraits of the authors (one of the printer Dangoor), uncommon in Hebrew books. Some books make use of colored inks, gold or red. The title pages of Baghdad imprints are often printed only as paper covers, sometimes on colored paper. Many books were printed without title pages, imitating manuscripts.

Most of the imprints are small books, both in length and in physical dimensions. About half are octavos, most of the rest duodecimos or sextodecimos; there are few folios or quartos. The largest book is the two-part legal compendium Zivhe Tsedek, printed by Joshua Hutsin in 1904. Two of the most curious of the Baghdad imprints are scrolls, among the few instances in Hebrew booklore of printed Esther scrolls, once prohibited by the rabbis.

The Sassoon Collection and the Valmadonna Library
The Valmadonna Trust Library, housed in London, is the world's foremost private collection of early and rare Hebraica, especially printed books from Italy, Ottoman Greece, Turkey and Palestine, India, and Baghdad. In 1999 the Trust acquired the remaining rarities from the celebrated library of the Anglo-Jewish bibliophile D. S. Sassoon (1880-1942), whose oriental Hebrew manuscripts and books included the rich corpus of Hebrew printing in Baghdad. The books in the Sassoon collection, together with those in the Jewish National and University Library in Jerusalem as of 1940, served as the basis for Yaari's Hebrew Printing in the East.

The Valmadonna Library holds the largest research collection in the world of Hebrew printing from Baghdad, including nearly 50 previously unrecorded titles and many unica, unique surviving copies. Altogether the Hebrew and Judeo-Arabic books from Baghdad comprise an unparalleled resource for the study of oriental printing, Hebrew liturgical history, Judeo-Arabic literature, and the history and culture of the most ancient Jewish Diaspora community. All of these bibliographic treasures are reproduced here for the first time.