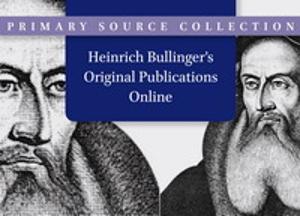 This collection contains a selection of the original works in Latin and German by the Protestant Reformer Heinrich Bullinger. In some cases translations of Bullinger’s works into Latin, French, German, English and Dutch have also been included because of their importance. This selection is of particular value for Reformation research in that Bullinger has always been overshadowed by Calvin and Zwingli.

Heinrich Bullinger's Original Publications Online
This collection contains a selection of Heinrich Bullinger's works in Latin and German. In some cases translations of Bullinger's works into Latin, French, German, English and Dutch have been included because of their importance. This selection is of particular value for Reformation research in that Bullinger has always been overshadowed by Calvin and Zwingli. This situation is biased, if not wrong. In the first place, it was Bullinger who saved the Reformation in Zurich after Zwingli was killed at Kappel in 1531. And in the second pace, not only before, but also during and after Calvin (1509-1564), Bullinger can be seen as at least the equal of the Geneva Reformer for Reformed Protestantism as far as his influence and his importance are concerned. The term Calvinism, used as key word, is already found in the mid-sixteenth century in the discussions between the Reformed churches in Rome, Lutheranism, and the Radicals. But this word is misleading, because in this period the Reformed Churches had two main centers and two spiritual leaders, Zurich with Bullinger and Geneva with Calvin. Bullinger and Calvin were friends and companions who had much in common with respect to theology, church organizations, and other ecclesiastical activities, as well as the influence they exerted. All the same, it is by no means justified to describe them both as Calvinists, either from a general point of view or in terms of specific details. But there is above all another reason: Calvin's work has long been and still is a subject of research, whereas Bullinger's theological and ecclesiastical activities and his general importance for church and secular history have received little or no attention.

Far-reaching influence
There have always been some scholars who have argued that Bullinger does not deserve this shadow existence; and more recent studies have confirmed his far-reaching influence and sometimes unique effect before, during and after the time of Calvin. This applies to Bullinger's role in the consolidation and spreading of the Reformed Churches as well as to their constitution, theology and confessions, and also to their influence on the political, economic and social development of large parts of Europe (e.g., the Swiss Confederation, Germany, the Netherlands, Great Britain, France and Hungary) and the New World. His influence and impact are seen in roughly 100 publications in Latin and German, the most important of which were reprinted many times and translated into other languages before his death. But this is even more evident from the innumerable still unpublished manuscripts and his unusually large correspondence comprising about 12,000 letters. For several decades, Bullinger's house functioned as a kind of agency where the latest news from all over Europe was collected, analyzed and passed on. And here Bullinger played an advisory role in both ecclesiastical and political matters that could not be treated through the official channels. For the many who needed advice and counsel all over Europe (including Calvin), he was a wise 'oracle' and an energetic helper.