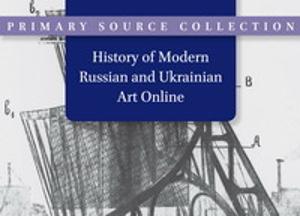 The collection documents the history of modern Russian and Ukrainian art. It encompasses critical literature, illustrated books, and art periodicals. It also offers a selection of early 20th century art-related serials. These historical sources of pre- and post-revolutionary art reflect the diversity of artistic thought in the first thirty years of the 20th century.

Scarcity
Sources for the history of modern and avant-garde Russian and Ukrainian art have long been difficult to locate. Major Western libraries that conscientiously built collections in history and literature from these regions commonly ignored books and journals concerned with the history of art. Art libraries, too, often disregarded them. The shortages brought on by war and revolution, short print runs, and the impossibility of distribution in the first quarter of the century, added to their scarcity.

Demand
The extreme rarity of these scarce publications and their lack of distribution have made them difficult of access, even in the countries of publication. The problem was made severe also when Socialist Realism became the only acceptable art in the Soviet Union in the early 1930's and materials concerning modernism disappeared from museums and libraries. The resulting deficit in scholarly resources has now become acute as the Western canon of the history of art, the art market, and museum and private collections have expanded to include modern and avant-garde Russian and Ukrainian works of art, and increased the demand for scholarly information.

Remedy
This collection begins to remedy such deficiencies. It offers a wide-ranging assembly of rare volumes and periodicals indispensable for historical research in the history of the art of this area during the first third of the twentieth century. It contains pre- and post-revolutionary periodicals such as Mlechnyi Put' ( The Milky Way) 1914-15, both issues of Russkoe iskusstvo ( Russian Art) of 1923, and Radians'kie mistetstvo ( National Art) 1928-1932 from Kiev, as well as major works by important artists, art historians and theorists, such as Malevich, Sidorov, Tugendkhol'd, Tarbukin, Ioffe, and Kushner.

Individual arts
The collection includes reference works, memoirs, and books about the life and art of many individual artists: Altman, Boichuk, Chagall, Ermilov, Golovin, Narbut, Ostroumova-Lebedeva, Palmov, and others. Many different groups and trends that bear upon modernism are also represented here, such as the visual arts and theatre in the Proletarian Culture movement ( Proletkult), crafts, and revolutionary art from the Anarchist viewpoint. The serials Iskusstvo i khudozhestvennaia promyshlennost' (1898-1902), and Iskusstvo v proizvodstve (1921), and the conference proceedings, Pervaia Vserossiiskaia konferentsiia po khudozhestvennoi promyshlennosti (1920), are some of the sources for the debates around industry and the arts.

Art history
Considerable attention has been given to art theory as it developed from the turn of the century through the 1920s, including the development of sociological approaches to art. The publications of such major art institutions as the Visual Arts Section of Narkompros (The Commissariat of Enlightenment), The State Institute of Art History, and The State Institute of Artistic Sciences, as well as the work of scholars and critics associated with them, are also notable.