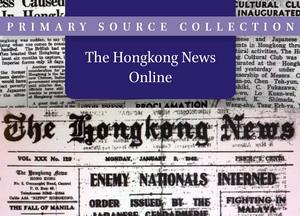 The Japanese Occupation holding of The Hongkong News started publication in 1941, right after the Christmas Day surrender of the British Crown Colony, and lasted up to August 17, 1945, the very last week before Hongkong's liberation. The paper had previously launched in ca.1940 at separate premises in the Crown colony. This complete run of The Hongkong News as published during the Japanese Occupation offers scholars the voice of Japan from Hongkong, a voice rightly described as 'a close, unvarnished, daily view of the recolonizing mind-set of the new masters of East Asia'. Brill's Hongkong News was scanned from an immaculate original and is now available online for the first time with full-text-searchable functionality.