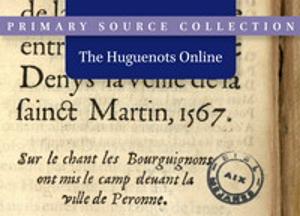 This collection offers a comprehensive survey of the original writings of the French Huguenot authors, from the radical dissent in the 1530s through to the end of the century. The selection privileges first and foremost original writings of authors writing within France and for an exclusively French audience.

As in many parts of Europe, the convulsions stirred by Martin Luther evoked a lively response in France. The rapid condemnation of Luther's heretical propositions by the Paris Faculty of Theology, the Sorbonne, ensured that the spread of evangelical doctrines would follow an altogether more tortured path. The first evangelical texts available in French were mostly translations from German or Latin of works by the major German reformers, and this continued to be a strong strand of evangelical publishing through to the middle of the century, when native writers began to make their voices heard. At first French authors ventured only a very tentative avowal of evangelical principles. Many of these cautious reformist works emanated from the Court circle associated with Marguerite de Navarre, sister of King Fran¸ois I, and they envisaged no fundamental break with the established church.

An entirely new situation arose when French writers moved in the mid 1530s to a more outspoken attack on Catholicism. The seminal text of this phase of the movement was the famous placard of 1535, though this was part of a larger literature that included a number of short, excoriating attacks on Catholic belief and practice. The scandal that followed the posting of the placard brought an end to the era of polite evangelism. Many leading reformers fled abroad; those that remained did so in risk of their lives.

The emergence of Geneva as a centre of the exile movement gave shape to a previously amorphous and disparate movement. Throughout the 1540s and 1550s Jean Calvin, and his collaborators Pierre Viret and Guillaume Farel, were the dominant voices in French evangelism. Their writings made of Geneva a major publishing centre, and established an enduring relationship between the Swiss city and the subsequently emerging French church.

The first avowedly Calvinist, or Reformed churches in France were established in 1554-1555. At first the influence of Geneva was overwhelming. Genevan educated ministers steered the church towards a theology and organisational structure closely modelled on that of Calvin's church. But as the Huguenot movement entered its period of most rapid expansion, after 1559, this dominance was gradually eroded. French Calvinism found its own voice: more assertive, more triumphalist, abandoning Calvin's emphasis on patience in the face of persecution. This new mood is reflected in this collection in a large number of anonymous tracts, scabrous, rumbustious attacks on the old clergy, joyous in celebration of Protestant victories as confrontation turned to warfare in 1562.

The end of the first war (1563) arrested the momentum of the Huguenot movement. The churches ceased their apparently inexorable growth, that had seen over 1000 churches established in less than five years, and the conversion of up to half of the nobility. Henceforth the Huguenot churches would seek equilibrium and doctrinal stability in a context of declining political influence and gradually eroding membership, even before the massacre of St Bartholomew's Day in 1572 confronted the church with its most serious crisis. The writings of the church's leaders during these years fell broadly into three categories: attempts to stabilise the church organisation, defending the Genevan model against persistent attacks from exponents of different forms of church governance; defences of the theology of the church against a resurgent Catholicism; and admonitions to penitence and resolution in times of suffering. This last strand became even more urgent after the massacre of 1572, which decimated the leadership of the movement and brought the previously powerful churches in northern France to the verge of collapse.

Through all of these events the influence of Genevan authors, particularly Calvin and Theodore de Bèze, remained strong, but a cadre of native French writers was finally beginning to emerge, among them Antoine de la Roche Chandieu, Jean de l'Espine and Philippes du Plessis Mornay. These three gifted authors offered an eclectic mixture of theology, consolation literature and political and religious polemic. Du Plessis Mornay also functioned, through his connections to Henri de Navarre, as a link to the political and diplomatic struggle. It was this connection, rather than the more famous resistance theory of the so-called monarchomach authors, that offered the way forward for the movement, and Huguenot morale was greatly enhanced by the emergence of Navarre first as heir (1584) and then, in 1589, as King. The final phase of the conflict saw the resolution of this relationship following Henry's inevitable conversion to Catholicism in 1594, with the negotiations leading to the Edict of Nantes in 1598 which brought an end to the military conflict. These political events also brought a renewed vitality and urgency to the polemical debate. While the Edict did bring Huguenots the prospect of limited security as a privileged minority, it also brought home the final recognition that Protestantism had failed in its attempt at the conversion of France, which had seemed a real possibility in the heady days of the early 1560s. Huguenot authors confronted the difficulties of co-existence, and the inevitable dangers that others would follow the King out of the Church, in a new flurry of powerful original writings.

This collection offers a comprehensive survey of the original writings of the French Huguenot authors, from the first stirrings of radical dissent in the 1530s through to the end of the century. The selection privileges first and foremost original writings of authors writing within France and for an exclusively French audience. Thus whereas Calvin's Genevan writings are not included, the tracts penned by Theodore de Bèze as part of the polemic exchange during the Colloquy of Poissy (1561) do appear here. A further strength of the collection is the anonymous works that set the tone as the Huguenot movement emerged as an autonomous force during the early part of the 1560s. While these works have much in common with the visceral anti-Catholic polemic of the first evangelical generation, they also make extensive use of verse, reflecting the pervasive influence of the metrical psalms on the emerging movement. The collection does not, however, include purely political manifestos, such as those issued by the Duc de Condé to justify the military conflict in 1562; the same distinction governs the limitation of the works of du Plessis Mornay included to his religious writings, rather than the purely political manifestos he wrote on behalf of Henri de Navarre. All told the writings collected here reveal an intellectually vibrant movement, meeting unprecedented challenges and later hardship with that mixture of confidence, aggression, and resolution in the face of adversity that characterises Calvinist churches of this era throughout Europe.
Location of originals