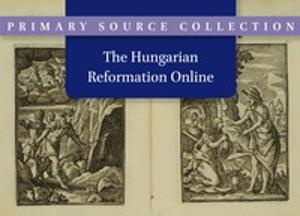 This collection offers a comprehensive survey of the original writings of the Hungarian reformers. It includes texts from the first stirrings of reform in the 1540s through to works written for the established churches of the region during the 1650s. It is an invaluable resource for historians of the Lutheran Reformation, international Calvinism, the Catholic Reformation, and the emergence of Anti-Trinitarianism.

The European Reformation affected societies from the Highlands in Scotland to the Carpathians in Transylvania. In recent years historians have begun to uncover the true breadth of religious reform across Europe during the early modern period. This has fundamentally changed our perception of the Reformation and of the development of Europe's major confessional communities.

Hungary
No part of Central Europe was more profoundly impacted by religious reform than the lands of the medieval Hungarian kingdom. On the front-line between Christian and Muslim Europe, Hungarian society was divided between a range of religions in the middle decades of the sixteenth century. In the Transylvanian principality these divisions were peacefully accommodated in a remarkable system of religious pluralism. The texts of Hungarian reformers, whether Lutheran, Calvinist, Catholic, or Anti-Trinitarian have hitherto been virtually unknown to the scholarly community. For the first time, this collection offers a comprehensive survey of the original writings of the Hungarian reformers. It includes texts from the period of the first stirrings of reform in the 1540s through to works written for the established churches of the region during the 1650s.

Religious diversity
The titles in this collection convey the unique character and wider significance of religious life in early modern Hungary. Texts have been chosen to reflect the religious diversity and spread of ideas about reform among the different linguistic communities of the region. There is firstly a focus on the emergence of three major strands of reform during the sixteenth century (Lutheran, Reformed, and Anti-Trinitarian), through works of doctrine, confessions, and catechisms. Further texts highlight battles over religious truth with particular regard to the sacraments and the Trinity. A third group of texts focus on the revival of Catholic piety in Hungary from the beginning of the seventeenth century. This collection also particularly concentrates on the development of Hungarian Reformed religion during the seventeenth century, one of the most significant but least well-understood of Europe's Calvinist churches, and includes literature about patterns of worship, educational reform, attitudes to politics and history, and about the Hungarian Puritan movement.

Wider significance
This collection is of immediate value not only to researchers of the history of Reformation in Central Europe, but also to those working on the impact across Europe of leading figures including Luther, Calvin, Bullinger, and Canisius. It is an invaluable resource for historians interested in the Lutheran Reformation, the development of international Calvinism, the Catholic Reformation, and the emergence of Anti-Trinitarianism. Finally, the collection features significant texts for historians of toleration, education, and patterns of religious piety.