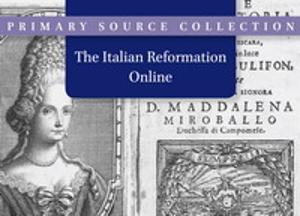 The theological profile of the Italian reformation has not been researched in sufficient depth. Obviously, such an exploration will require specific knowledge of the primary texts. Critical editions, however, are very rarely available. This collection offers a synopsis of the diversity of the manifestations of the Italian Reformation and will therefore facilitate research in this fascinating, still largely fallow area.

The spread of the Reformation
In recent decades scholars have increasingly turned their attention to the Italian Reformation. What was previously considered a peripheral phenomenon to the main drama of religious renewal that was being played in Northern Europe has begun to be recognized as an important movement in its own right. Approximately 70 years after the pioneering work by Delio Cantimori (Gli eretici italiani del Cinquecento, 1939) continued and lively research into inquisitorial archives has offered a striking proof that the movement spread widely and varied greatly. It reached not only clerical, intellectual and aristocratic elites in the cities but it also gained a foothold among merchants, artisans, and farmers even in the remote areas of Calabria and Sicily. Moreover, its theological orientation was far more diverse than is generally assumed. There were the Spirituali, the circle around the Spanish immigrant mystical theologian Juan de Valdés, fully-fledged Reformed Protestants such as Peter Martyr Vermigli and Jerome Zanchius, Lutherans, Anabaptists and 'heretics' such as Faustus and Laelius Socinus, who pursued their quest for the truth separately from the orthodoxies of the Reformation and the Church of Rome.


Inquisition
Despite auspicious beginnings there was no question of Italy 'turning' protestant, owing in large part to the decisive action undertaken by political and ecclesiastical institutions. All over Europe the Reformation could take root only when and where vigorous interventions by the political power facilitated it. But this situation did not occur in Italy. After the Sack of Rome in 1527, the rulers of the Italian states could hardly ignore the religious priorities of powerful transalpine polities, above all of the Holy Roman Empire, or afford to opt out of the papal patronage system. Moreover in the summer of 1542 the Roman Inquisition was reconstituted to control the expression of religious ideas and to repress heterodoxy on all fronts. While the energy and the effectiveness of the Holy Office during this period are still debated, there is little doubt that the new atmosphere of repression set in motion the flight northwards of numerous intellectuals and common people who refused to submit to religious coercion - a recurring phenomenon throughout Italian history. Confronted with threat and persecution, those who remained behind faded silently back into Catholic conformity. By 1600 Protestantism in Italy was gradually extinguished and the Catholic church became the cement of Italian society. There was however a single exception: the Waldensians. They defended themselves so energetically that the duke of Savoy was forced to grant them limited rights of protestant worship within their alpine enclave under the Agreement of Cavour signed in June 1561.


Cantimori formulated the thesis that the Italian Reformation was saved from becoming a fossil of history by the intellectual activity of those Italian religious refugees who had continued to cross the Alps after 1542 to escape persecution. They disseminated the 'most original, most promising content of Italian humanism' in the European diaspora. Cantimori drew however a sharp dividing line between orthodoxy and heterodoxy. The heretics (like Socinus), those 'rebels against every church, adverse to every confessio fidei' were the ones who made the most original, most successful contribution to European intellectual history. By contrast, refugees like Vermigli, who were essentially orthodox, stood by their essential loyalty to the Protestant churches, and so visibly adapted their theology to the extent that they lost all originality.

Primary texts
This ever fascinating but also controversial Cantimorian paradigm has had a lasting impact on both Italian and international historiography. Studies of two subsequent generations either directly or indirectly inspired by Cantimori already fill a small, multi-lingual library, as the impressive bibliographical survey by John Tedeschi demonstrates (The Italian Reformation of the Sixteenth Century and the Diffusion of Renaissance Culture, 2000). Still, the theological profile of the Italian Reformation has not been researched in sufficient depth. Obviously, such an exploration will require specific knowledge of the primary sources. Regrettably critical editions are very rarely available. To fill the vast research gaps, two ambitious projects were launched: the Corpus Reformatorum Italicorum and the Studi e testi per la storia religiosa del Cinquecento. Research has already profited greatly from these two series, yet they have not progressed with the desired rapidity.


This collection
To fill in the lacunae, Brill presents this collection of the main texts of the Italian Reformation. The field to be covered was so vast and the need of a representative assortment so exacting that hard decisions had to be made in order to keep the collection to reasonable length. I cherish the hope that the sources presented here will promote both wider and deeper research on Italian Reformation history.

Emidio Campi, Ph.D. (1976), is Professor of Church History and Director of the Institute for Swiss Reformation History at the University of Zurich. His research focuses principally on the Swiss and Italian Reformation and on early modern religious and cultural history.

Thanks
Brill and the Advisor wish to thank the following persons for helping to prepare this collection: