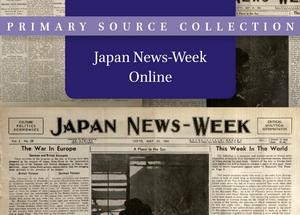 American Japan News-Week was the last independent, foreign-owned English-language newspaper published in Japan. This exclusive holding runs from the first issue in November 1938 to within 6 months of the newspaper’s closure and the arrest of Wills and Argyll by Japanese ‘Special’ ( Tokko) police in early December 1941, the night before Pearl Harbor, on a charge of espionage.

The Japan News Week is sourced as follows: