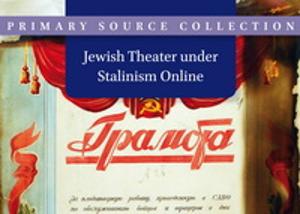 This collection contains sources on the history of Soviet culture and theater, Jewish avant-garde art and the Kremlin’s policy toward Jewish society and culture from 1919 until 1949. The collection contains correspondence with ministries, state organizations, and authors; administrative-managerial documents; plays performed by or submitted to the theater, and more fascinating material.

The collection of archival documents from the Russian State Archive of Literature and Art (RGALI) contains unique material on Jewish avant-garde art, Stalin’s repressions and the history of Soviet culture and theater. This material, which is in Yiddish, Hebrew, Russian, English, French, and other European languages, allows us not only to further our knowledge of Yiddish theater and Jewish culture in the Soviet Union, but also to deepen and revise our understanding of the Kremlin’s policy toward Jewish society and culture, and of the realia of the everyday life of Jews in the 1920s-40s.
The collection will appeal to theater specialists, art historians, specialists in Soviet and Jewish history, historians and sociologists of Jewish culture, historians of the theater and music scholars.

Realization of the Dream
Generations of creative Jewish intelligentsia dreamed about creating an artistic Jewish theater that could compete on the same level as the recognized Russian and European troupes. But financial circumstances precluded the realization of these dreams. Because there were too few Jews in the diaspora to fill the house every night, the box-office receipts were insufficient to sustain a theater as a cultural institution. As a result, Jewish troupes wandered from village to village and from town to town in search of spectators. This prevented them from concentrating on artistic problems and forced them to lead a semi-professional existence. Such dreams could only be realized with secure state support. Such support was offered by the Soviet regime, but on its own conditions, usually ideological ones. The conditions became increasingly severe during the 1920s-1930s, until they finally took the form of a death sentence.

National Theater
In 1917, the Russian Empire contained the largest Jewish population in the world. In the 1920s and 1930s, a new proletarian Jewish culture emerged that spawned various political, scholarly and cultural organizations. In 1919, the theatre that six years later would become GOSET opened in Petrograd under the name of the Jewish Chamber Theater; in 1920, it was transferred to Moscow. The founder of GOSET, and the artistic supervisor and director of almost all its productions until 1928, was Aleksei Granovskii (Avraam Azarkh), who defected during the troupe’s first European tour. From 1929, GOSET was headed by Solomon Mikhoels (Shlomo Vovsi).

GOSET reflects not only the most inspiring artistic achievements but also the successes and failures of Soviet nationality policy. In the 1920s-1930s, Moscow was unique in having a truly multicultural theater, something that other great cities could boast of only some 50 years later. During this period, Moscow was home to studios and theaters of various origins: Georgian, Armenian, Ukrainian, Latvian, and even German and Polish. It was here that the Jewish theater managed to accomplish a great leap from the rearguard to the vanguard of theatrical art. The theater became the most important, and after WWII the only, center of Yiddish culture in the USSR, and introduced many innovative ideas about theatrical performance and art. In 1928, GOSET embarked on an extensive and highly successful European tour. In 1948, during Stalin’s anti-Semitic campaign, Solomon Mikhoels was killed by the Soviet Secret Police; a year later, GOSET was closed down.

Left-wing Art
Although left-wing art of the 1920s positioned itself to a significant degree as non-nationalist, GOSET combined avant-garde devices with national themes. To a significant extent, the character of the theater was determined by a galaxy of outstanding artists, namely Mark Chagall, Natan Al’tman, Isaac Rabinovich, Robert Falk, Aleksandr Tyshler, and others. For the artists of GOSET, their excruciating existence in the ghetto became a source of both tragic and comic elements. For them, to live meant to preserve their national and cultural identity in a situation of diaspora. In the 1920s, life in a small Jewish town became GOSET’s principle theme. From satirical sketches and theatrical parodies, GOSET moved on to the theatrical experience of the tragic fate of the Jewish people.

Touring
The artistic universalism of GOSET made a significant creative contribution to both the Jewish and the Russian theater. Touring began as early as October 1921, when the troupe traveled to Belarus, Ukraine, and Leningrad. In 1928, GOSET embarked on an extensive and highly successful European tour. Performances in Germany, Austria, France, Holland and Belgium are evidence that the art of GOSET was an essential component of European theater in the 1920s. In the 1930s – the years of Stalinist repression and severe censorship – the theater continued to attract the attention of broad groups of spectators, to expand the geographical scope of its touring, and to triumphantly to mark its twentieth anniversary. By 1940, the troupe comprised some 50 people. During the years of the Great Patriotic War (1941-1945), the theater was evacuated to Tashkent (from December 1941 through September 1943), where the military sponsored some 400 performances.

Solomon Mikhoels
From 1929, GOSET was headed by Solomon Mikhoels (Shlomo Vovsi, 1890-1948). Mikhoels was a major figure in European theater: He was both an actor and a prominent politician with an international reputation. As an artist, he combined the tradition of Jewish roving comics with the technical achievements of avant-garde theater.

Mikhoels was highly regarded not only in theatrical circles. Broad Jewish masses saw him as their representative and intercessor with the authorities, and also used him for their own propagandistic goals. In 1941, Stalin appointed Mikhoels head of, and chief spokesman for, the Jewish Anti-Fascist Committee. Through media propaganda and their own personal contacts with Jews abroad, the members of the Committee were expected to influence public opinion and to enlist foreign support for the Soviet war effort. In 1943, Mikhoels made a trip to the USA, Canada, and Great Britain, soliciting contributions for the Soviet Army. His murder in Minsk in 1948 – which, there is reason to believe, was carried out on Stalin’s orders – marked the beginning of the elimination of Jewish culture in the USSR.

The Ideological Order
GOSET did not remain a favorite of the party-state leadership for long. In return for secure state support, the Soviet regime imposed its own ideological conditions. As early as the second half of the 1920s, GOSET and other Soviet theaters were ordered to portray on stage scenes of revolution and socialist construction; this order gradually assumed the form of an ultimatum. A huge number of plays performed by the theater, or submitted for its consideration, are preserved in the GOSET archive, even though many of them were never published.

It is of great interest to see in which years and on what basis plays were accepted or rejected: The press and the notes written by censors reveal the authorities’ official reaction to the problem of the Jewish theater in Russia and, indirectly, to their relationship to Jews as a whole. By the end of the 1940s, anti-Semitism had become government policy and repressions were carried out on a national scale. In 1949, following the murder of Mikhoels and the arrest of Zuskin (1949), GOSET was closed down as part of the 'struggle with cosmopolitanism'.

Artistic Salvation
GOSET found its artistic salvation in the official conception that socialist culture is the single legal successor to the world culture of past epochs. In connection with this idea, world and national classics ranging from Sholem Aleichem to Shakespeare were rehabilitated. Productions of Sulamif by Samuil Galkin based on Goldfagen (1937, directed by Mikhoels), Tevye the Dairyman based on Sholem Aleichem (1938, directed by Mikhoels), and King Lear (1935, directed by Sergei Radlov) were major creative achievements. The actors Solomon Mikhoels and Veniamin Zuskin were symbols of all stages of the life of the theater. In their art, the laughter and tears arising from Jewish pensiveness and rootlessness became part of theatrical poetry.

Provenance
After the theater had been closed down, its archive was moved to the Aleksei Bakhrushin State Theatrical Museum, where it was stored (without being catalogued) along with the archives of other closed theaters, for example, the Chamber Theater and the Second Moscow Art Theater. In the night of January 6-7, 1953, a major fire broke out in the small room in which the archives of these discredited theaters were kept. The documents suffered considerable damage, and many were destroyed. The materials that survived were transferred by order of the Committee for the Arts of the Council of Ministers of the USSR first to the collection of the Main Archive of the Ministry of Internal Affairs, and then (in 1959) to the Central Archive of Literature and Art (TsGALI), which is now the Russian Archive of Literature and Art (RGALI).

Unique material
The collection comprises both the archive of GOSET (Fond 2307, opis’ 1-2 ) and that of the Moscow State Jewish Theater School (MGETU) (Fond 2308, opis’ 1). The documentary materials are organized primarily chronologically (opis’ 1) and in accordance with the various parts of the theater (opis’ 2). The materials related to the 'Secretariat' reflect the administrative-managerial and creative activity of the theater; the struggle to impose state control on the theater; labor and financial discipline; the organization of tours; the contact with a broad audience; and the policies of the Soviet authorities in the sphere of national minorities.

The second of the major categories is the 'Literary Section', which contains a large collection of Jewish plays, both in Russian and in Yiddish, that either were performed in the theater or were in the repertoires of other Jewish theaters. These materials offer historians of Jewish literature and sociologists of Jewish culture tremendous insights, as they provide information about the realia of daily life, Russian relations to Jews at that time, and anti-Semitism.

The small, but unique, 'Musical Section' contains musical items for productions at GOSET. The impressive categories 'Press about the Theater' and 'Posters, Programs, and Librettos' constitute an important factual source. The category 'Graphic Materials' is a valuable iconographic resource, the main body of which consists of photographs of GOSET productions and of the actors off-stage. The 'Personal Documents' and 'Personal Affairs of the Theater Employees' categories contain materials related to the creative lives of Granovskii, Mikhoels, Zuskin, and many other members of the GOSET troupe.
Location of originals

Russian State Archive of Literature and Art (RGALI) in Moscow