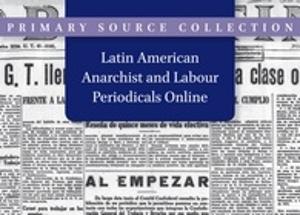 This collection contains the periodicals that have been accumulated by the Austrian anarchist, historian and collector Max Nettlau (1865-1944), together with a number of later additions, held at the International Institute of Social History (IISH) in Amsterdam. The collection provides a richness of documentation pertaining explicitly to the formative anarchist and anarcho-syndicalist episode (1890-1920) in the history of Latin American labor movements.

Latin American Anarchist and Labour Periodicals (c. 1880-1940) Online
From the Archives of the International Institute of Social History (IISH) in Amsterdam

Latin American labour movement in context
The history of the Latin American labour movements is best traced and studied within its specific context. Many sections of the economy were based on artisanal aspects, and this may explain the early rise of anarchist ideas. Starting in the 1880s, the influence of anarcho-syndicalist ideologies increased. Important in these ideologies was “direct action”. Only at the height of the labour struggles in the years 1920-1921 we can see the first modest improvements in the overall position of the working classes. The importance of alternative notions about labour issues increased with the enlargement of the industrial base in many Latin American economies. Disappointment with the overall lack of results after many years of continued struggles must have been a factor that contributed to the diminishing role of anarcho-syndicalist ideologies after 1921. Trade unions focusing on the promotion of pure economic interests came into existence, social-democratic and communist organizations grew, Catholic labour organizations emerged, and the first limited social legislation was implemented. Eventually, the 1930s present a picture of populist, nationalist and statist labour movements, which was to characterize the history of Latin America thereafter.

Invaluable collection
The collection of the IISH provides a richness of documentation pertaining explicitly to the formative anarchist and anarcho-syndicalist episode in the history of Latin American labour movements. It is one of the most extensively researched collections at the IISH. This digital version with added OCR is invaluable for historians of Latin America, of anarchist and anarcho-syndicalist movements, and  for labour historians.

The collection contains numerous rare, and in many cases unique, titles. It consists of periodicals accumulated by the Austrian anarchist, historian and collector Max Nettlau (1865-1944), together with a number of later additions. Included, among many others, are the Argentine periodicals La Protesta, La Vanguardia and Acción Obrera; the Brazilian O Exempio, Jornal do Povo and Battaglia; the Chilean Voz del Mar; and the Mexican Ariete, Redención Obrera, Revolución Social and El Sindicalista.