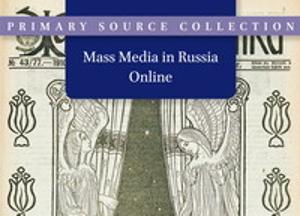 This unique collection contains complete runs of kopeck (penny) newspapers, the most widely circulated Russian newspapers in the beginning of the 20th century. They document political and social developments in Russia from 1908 to 1918 and are a mirror of the colorful social and cultural life of the Russian capitals. This collection gives access to a rare source practically unavailable in Western libraries.

The appearance of a kopeck, the first working class daily newspaper press, in June 1908 finally gave Russia its 'penny' equivalent and integrated a whole new stratum of readers into the newspaper audience. It promised the world, literally, every day for one kopeck. Kopeck newspapers soon became the most widely circulated in Russia.

Valuable cultural artefact
The new popular culture, which arose in Russia from 1861 to 1917, was embodied primarily in the commercially printed material that circulated among the lower classes. When the lower classes learned to read they turned from their oral heritage to the printed word, and new types of publications appeared to serve their needs. Among the new types of newspapers that appeared in the last third of the nineteenth century were some that contemporaries identified as 'the street press', 'the little press' or less sympathetically as 'boulevard press'. These newspapers were intended for a wide urban audience, and they contained descriptions of the grim and sordid aspects of city life, crime, scandal and misfortune. 'The editorial concept of Kopeika - a paradox of integration and escapism' made Kopeika so valuable as a cultural artefact. (McReynolds, L. The news under Russia's Old Regime. The development of a mass-circulation press, Princeton University press, 1991. p. 230.)

St. Petersburg Gazeta Kopeika
The St. Petersburg Gazeta Kopeika (1908-1917) was a four-to-six page daily tabloid designed and priced to capture the interest of the new common reader. The newspaper was started by M.B. Gorodetskii (1866-1918), a liberal Jew who had learned his trade writing about poor and exploited labourers first in his native small town Gorlovka in Donetsk guberniia and then in Rostov-na-Donu. In the middle of the 1890s he moved to St. Petersburg. He recognized that the striking workers had commercial publishers who defended their interests, but none that appealed to them directly.

Gorodetskii teamed up with several relatives and V. Anzimirov, a popular writer, to produce a remarkably unique addition to the newspaper contingent in St. Petersburg, available for three rubles annually or one kopeck per single issue.

A year later in 1909, Anzimirov left St. Petersburg to inaugurate Moscow's kopeck press, which far more radically, lived a precarious existence under a variety of names with different editors and publishers.

As the enterprise of Gorodetskii and his friends flourished, Gorodetskii branched out into other publications, and Kopeika became a joint stock company in 1913. One of the most interesting projects was the firm Contemporary Lubok, which issued propaganda posters by K Malevich and other well-known artists during World War I. The poet Vladimir Mayakovsky wrote captions for the pictures and drew a few illustrations of his own.

Phenomenal circulation
This working class daily immediately attracted a huge readership. From the first days of its existence the St. Petersburg Kopeika was an enormous success. Its circulation rose from 11,000 copies in the first days of publication in 1908 to 150,000 in 1909. By 1910 circulation peaked at 250,000 copies making Kopeika the most popular newspaper in the Russian Empire. Annual street sales of Kopeika started with 2.233.167 issues; it was reported to be selling 10.229.268 copies in 1910 and 17.308.717 in 1911.

The independent Moscow edition of the Kopeika was almost as successful as the St. Petersburg edition. Circulation of the Moscow kopeck paper reached 60,000 in the first year of publication and 150,000 copies by 1912.

Subscribers
The St. Petersburg Kopeika and Moscow Kopeika were read by lower-class readers, mainly newly literate migrants from the countryside or working people who had grown up in the city. The intention of the editors of the kopeck newspapers to address their papers to the lower-class population was particularly evident in the 'workers life' column. Readers' letters in Kopeika spoke out for society's most marginal elements. They criticized existing institutions when they failed to protect them. The variety of issues under discussion ranged from arguments for improved health care for prostitutes to better salaries for clowns.

Content
The editors of the kopeck newspapers in the capitals made their newspapers inexpensive, displayed serial fiction prominently, and paid lavish attention to crime, scandal, and human-interest stories. They allotted space to national and international news and they claimed an educational role. They also adopted a liberal political position. They promised "to give new masses of people, for whom the large newspapers are unsuitable because of price or language, the opportunity to know what is happening in the world." (Brooks, J. When Russians learned to read: Literacy and Popular Literature, 1861-1917. Princeton, 1985 p. 133).

The most discussed topics in the pages of this newspaper were poor living conditions of the population's lowest groups, inefficiency of authorities, prostitution, suicide, hooliganism, street crime, alcoholism and child abuse. <i>Kopeika</i> attacked the city government for not dealing effectively with the dilemma of infant mortality, just as it faulted the national government for its hypocritical attitude toward alcoholism.

The Russian Empire and world beyond were portrayed in the kopeck newspapers as a seemingly endless stream of places in which exciting or curious events took place. There were articles about the lives of coachmen, street artists, the bums' bourse where old cloths and shoes were trade, prostitutes, etc.

Source for mass culture studies
The edition of 'Kopeika' press allows easy access to a unique and rare source practically unavailable in Western libraries. These newspapers document political and social developments in Russia in the pivotal years from 1908 to 1918 and at the same time provide a mirror of the colourful social and cultural life of the Russian capitals.
Location of originals

The National Library of Russia, St.-Petersburg