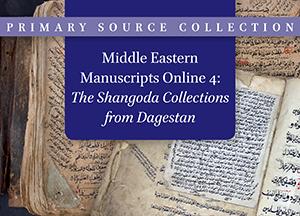 MEMO-4 offers 150 manuscripts that form the collection of Rafi’ Shamghudi (1863-1932), a famous scholar and bibliophile from Shangoda, a town in central Dagestan. The collection, which consists of texts in Arabic and Persian, includes copies from the Timurid period. All metadata is LoC-compliant.

The Arabic-script manuscripts and old-printed books from the collection of the village of Shangoda, Dagestan

At the end of the 1920s, a massive anti-religious campaign began in the Soviet Dagestan; mosques and madrassas were closed, repressions against Muslim scholars were initiated. The sixty-nine-years-old Dagestani Muslim scholar Rafiʿ-haji from the village of Shangoda was among the intellectuals arrested by the Joint State Political Directorate (OGPU, secret police of the USSR) in 1932. While some of the sources state that he died in prison, others claim that he was executed by the OGPU in the same year.

Rafiʿ was born in the village of Shangoda, located in Gunib district, in the family of the theologian and copyist, Ismaʿil b. Rafiʿ, who was a 13th-generation scholar. Rafiʿ received his primary education from his father and then continued studying in different madrassas for more than 18 years. After having finished his education he performed the pilgrimage to Mecca at the beginning of 20th century, visiting the University of al-Azhar in Cairo on his return to Dagestan. Unfortunately, nothing is known about his time in al-Azhar. Unlike his contemporaries, Rafiʿ al-Shamgudi specialized in natural sciences like math, astronomy, and especially medicine. Furthermore, he was not only a theorist but also practised medicine.

Rafiʿ Efendi made so much effort collecting books, that one can believe there is no book he did not hear about. Being an elderly person, he continues to expand his library. Rare book on medicine, astronomy, philosophy, logics and other science, including a hand-written of the “Almagest” by Ptolemy in Arabic and challenging geometry books also were in his library.

After his arrest, OGPU members took his library out on five carts and destroyed it. But there were so many books that not all of them fit in carts so OGPU members left some part of his library in the village. Members of his community hid the rest of his library in the mosque’s basement under the minaret and built a wall, behind which they immured survived manuscripts. Later the mosque was closed while its building was used as a club. Until 1986 all manuscripts were in the basement. Besides the books hidden in the basement, about one thousand titles were handed to his son Ismail. Unfortunately, after his death in 1986, a big part of this collection was lost by his descendants.

In 1986, the imam of Shangoda, Khalid Yusupov, decided to reopen the mosque. By taking down an old structure built during USSR, he discovered the walled niche (michrab) of the mosque behind which was a basement with an enormous number of manuscripts. Regrettably, being immured for decades, more than 80% of the manuscripts was destroyed. Nearly one hundred books, which have survived, are fascinating in terms of genre, chronology and language variety. Among them, one can even find manuscripts dating between back as far as the 12th century. The collection includes not only manuscripts written or copied in Dagestan but also manuscripts produced in other Muslim regions including Central Asia, Near East, Azerbaijan, Turkey and Iran.

This collection also includes autographs of Arabic authors and the very first copies taken from the autographs.