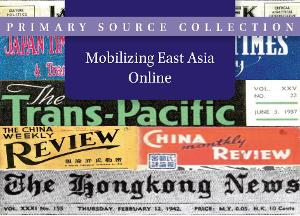 Mobilizing East Asia offers a carefully selected and tightly organized range of essential English-language newspapers, magazines, pamphlets and books following the descent into war in East and South-East Asia from the turn of the twentieth century to the 1950s. This exciting collection of newspapers and lavishly illustrated magazines, often in colour, shows the route from the defeat of Russia by Japan to Japan’s own  defeat, through seismic upheaval in China and the onset of systemic change in Asia.