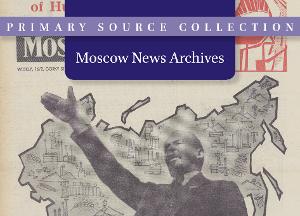 Moscow News, founded in 1930, for years represented the official English-language press organ of the Communist Party of the Soviet Union. Its establishment stemmed from a large influx of foreign, mostly American, workers who emigrated to Russia during the Great Depression. Its mastermind was American journalist and activist Anna Louise Strong, who acted in cooperation with Stalin’s cultural propagandists with the aim of providing English-speaking newcomers with an informative – and often edulcorated – view of the Soviet standards of life. Thus, throughout the years, Moscow News served as a tool of positive propaganda that the Soviet regime employed to embellish and polish its public image. As a consequence, censorship heavily affected its rhetoric, narrative, and contents, determining which issues were worthy of being reported and which ones had to be dismissed or ignored. For this reason, the newspaper is a rich resource for those who are interested in assessing the internal mechanism of the Soviet Union’s cultural diplomacy and consensus-building machine.

Moscow News was the longest-living English-language newspaper published in Soviet Russia. Founded in 1930, it represented for a long time one of the official voices of the Kremlin, offering a foreign(-minded) audience an edulcorated image of the regime.

The origins of Moscow News are rooted as much in an orchestrated public diplomacy effort as in a genuine transnational and cross-cultural exchange. The newspaper, indeed, was born out of an intense cooperation between Stalin’s communication officers and a well-known American left-wing journalist, prominent activist, and longtime pacifist, Anna Louise Strong.[1] On Stalin’s side, the operation was blessed by the All-Union Society for Cultural Relations with Foreign Countries. This office, led by Trotsky’s sister, Olga Davidovna Kameneva, originally aimed at promoting Soviet cultural diplomacy, but it quickly ended up shaping and influencing foreign debates on and perceptions of the USSR.[2] Ms. Strong was a staunch supporter of Soviet Russia. She had visited the country many times back in the 1920s, interviewing common people, ordinary workers as well as senior party leaders, and had constantly reported about her experiences through articles and books.[3] She was convinced that Leninism could open up new, unexplored “frontiers of hope and human progress” and show Americans the value of peaceful communitarianism over bellicose individualism.[4] After having gained firsthand experience of life conditions in rural Russia, however, she came to believe that American managerial efficiency and industrial mechanization were crucial elements that the Bolshevik Revolution needed to fully live up to the expectations it had raised.

These views, at the beginning of the 1930s, were particularly timely and popular in Russia. In fact, in between the two world wars, Soviet leaders were trying to adapt the American industrial model to their country. This meant the implementation of scientific management in Soviet factories, the reliance on US technical expertise and know-how, and the application, whenever possible, of the principles of Fordism. Forced industrialization thus – vividly represented by the multinational project of the Dniepr River Dam, which was built with the fundamental help of American companies, equipment, and workforce – attracted thousands of foreign workers, and many of them were skilled Americans who felt that moving to Russia represented a better alternative to the Great Depression at home.[5] The Soviet apparatus, keen on selling a positive image of the regime in any possible way, made sure that these newcomers could feel comfortable in their new homes and find any sort of store, tavern, or pastime they needed. American musicals and shows started being performed in Moscow and, simultaneously, English-language publications and newspapers started circulating as well. Moscow News was the most prominent of them. And even though it did not fully succeed in altering foreign observers’ generally negative impression of life in Soviet Russia, it kept indulging in a benevolent representation of Stalin’s policies.[6]

In 1932, Moscow News merged with Workers News to become Moscow Daily News, a daily newspaper that was published until the end of 1933. Moscow News survived as a weekly thereafter. Anna Louise Strong remained the driving force behind it. Her appeals were addressed to those US industrial skilled workers who, in the attempt to escape from the dire consequences of the economic crisis at home, emigrated to Russia, often without much of an idea of the country and barely any knowledge of its language. Strong mainly wanted to inform these people about typical elements of Soviet life. While co-editing and running the journal with her Russian colleagues, Strong transformed Moscow News into one of the best-informed sources in the USSR. Direct access to Stalin and his closest advisers, though, also meant that the newspaper had to follow a strict party line, and it ended up misrepresenting or blatantly ignoring such dramatic events as the 1932-1933 famine and the 1937-1938 Great Purge.

Throughout the 1930s, Moscow News fully endorsed the USSR’s propaganda. This eventually led Strong to leave the newspaper’s editorial board in 1936, when she left Moscow for Madrid to start reporting on the Spanish Civil War. Strong’s departure gave Soviet officers a free hand in the organization of the newspaper, which slowly became a mere amplifier for Stalin’s (infamous) decisions. In 1940, for instance, while carefully shunning any mention of the Katyn massacre, Moscow News gave ample resonance to the new alliance Stalin had signed with Hitler, reporting how “the friendship between the peoples of Germany and of the Soviet Union, cemented by blood, [had] every basis for being lasting and firm.”[7] Later, the newspaper followed Moscow’s U-turn and started attacking the duplicity and dangerousness of the Nazi regime, promising to fully endorse the struggle to “Wipe Fascism off the Face of the Earth,” as its cover page proclaimed on June 27, 1941.

At the dawn of the Cold War, Moscow News took an increasingly critical stance toward the United States. The directive to highlight the split between Moscow’s views on the new, post-war world order and opposing Western views came directly from the Kremlin. These pressures completely altered the nature and the mission of the newspaper, which moved from being a benign showcase for the regime to becoming a source of militant attacks against capitalist threats, vices, and ambitions. In 1949, this transformation brought Moscow News’ editor-in-chief, Mikhail Bourdin, along with several other members of the editorial board, to openly challenge the new political aim of the newspaper and, consequently, to fall victim to Stalin’s new wave of purges immediately thereafter. Bourdin was arrested in the so-called “Anti-Fascist Committee plot,” under the accusation of being a “rootless cosmopolitan,” and Moscow News was closed indefinitely.

Moscow News reopened its offices only in 1956, with the advent of Khrushchev’s de-Stalinization. The newspaper reverted to being a tool of positive Soviet propaganda firmly in the Politburo’s hands, with the ultimate aim of modifying foreigners’ perspectives on the USSR’s performance in the social, cultural, and political realms. To achieve that goal, the newspaper went through a process of rapid modernization that transformed it into a complex media outlet, one that was able to reach 140 different countries and was translated into a dozen different languages. From a purely stylistic point of view, thus, in the 1960s, Moscow News improved its standards by relying on a plethora of such well-trained professionals as translators, interpreters, and copy editors. Content-wise, however, the narrative was still provided by the Kremlin. The tone of the articles remained largely eulogistic: for example, Moscow News defined Khrushchev as “the most active chairman of peace” and repeatedly praised the idea of “peaceful coexistence” as one of the major breakthroughs of the twentieth century.[8] In the end, the newspaper continued either to ignore or, at best, to mitigate a series of controversial events ranging from suffocated domestic protests to the uprisings in Prague and Budapest.[9]

The tide turned only in the early 1980s, when the young reformer Mikhail Gorbachev came to power and launched his policies of glasnost and perestroika. From that moment onward, Moscow News became a relatively independent – at times critical – and increasingly reliable voice in the varied landscape of Russian media. The newspaper started contributing on both domestic and international issues by adhering to the facts and endorsed a transparency campaign aimed at uncovering some of the most disturbing elements of Stalin’s reign of terror. In a series of reports, Moscow News revealed Stalin’s personal role behind the Ribbentrop-Molotov pact; it uncovered the story of the Soviet dictator’s interference in the Manhattan Project and his wide web of nuclear spies; it also published an account of the so-called “Doctors’ Plot,” an episode that testified to Stalin’s mania of persecution inasmuch as he had accused Kremlin doctors of murdering Politburo members at the direction of British and American intelligence as part of a “worldwide Jewish conspiracy.”[10]

Moscow News survived the cold war. The institutional changes that affected Russia from the early 1990s onward imposed the need for a reconsideration of the aim, audience, and style of the newspaper. Its global reach was preserved, and its focus on domestic issues improved with the launch of a Russian edition. In 2010, in order to celebrate its 80 years of publication, the print edition was enriched by an online edition and a mobile interface. Along with traditional reports, the newspaper’s website included a broad spectrum of multimedia products and services, interactive options, infographics, and infotainment elements. Thus, within a few years, the old mouthpiece of Stalin became one of the most outstanding promoters of democracy and the free press in Russia. Even so, its mounting criticism directed toward the current political setting in Moscow led to its closure in 2014.

The collection Moscow News Archives is particularly relevant for those who are interested in studying Soviet Russia’s public diplomacy and propaganda. At the same time, the articles and editorials published in Moscow News are an invaluable resource for the analysis of Soviet rhetoric, public debate, and the intellectual development of Russian socialism in general. Due to its peculiar position and its most immediate target audience, finally, this archival newspaper collection illuminates the many transnational and cross-cultural exchanges that characterized the evolution of the USSR throughout the Cold War.

[1] Born in Nebraska into a religious family, Strong came to prominence in the early 1900s, when she started advocating for children’s, women’s, and workers’ rights. She opposed US participation in the Great War and promoted conscientious objection. After the Bolshevik Revolution, she became a supporter of the Russian regime. She visited Russia for the first time in 1921 and traveled to provide relief to famine victims. At that time, she served as Moscow correspondent for the International News Service. Before helping to establish Moscow News, Strong went back to the USSR in the late 1920s. Her papers are available at …

[3] See, among the others, Anna Louise Strong, I Change Worlds: The Re-making of an American (New York: 1935), in which she carefully describes her role in the launching of Moscow News.