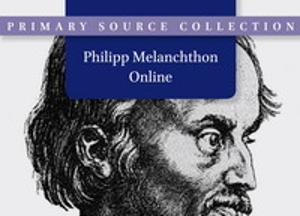 This collection includes works not contained in more recent collections of Melanchthon’s works. Second, it preserves important earlier printings of works. Third, it contains a copy of the four volume Opera omnia, both to indicate the materials available immediately after Melanchthon’s death and to give readers access to the only index of his more well-known theological works.

Historical background
Philipp Melanchthon (1497-1560), reformer and humanist scholar at the University of Wittenberg, was one of the most important figures in early modern Europe. His correspondence, larger than that of Luther and Erasmus combined, spanned the European continent. He had contacts in every major court and university in Europe. His writings, covering the fields of language and logic, Greek and Latin literature, philosophy, theology, politics, history and even astrology, mathematics, and medicine, were enormously popular - if judged only by the number of times they were reprinted. His sometimes unpopular stances on the religious issues of the day led to his rapid development from noted Greek scholar to lightning rod of the Reformation. Upon assuming Luther's mantle after the older man's death, Melanchthon faced a firestorm of controversy that eventually led to an ambiguous assessment by his theological heirs and to his relative obscurity (in comparison to household names like Luther, Erasmus or Calvin). Yet during his own lifetime he could easily lay claim to being the most influential reformer and humanist of them all. A polymath, he commanded respect in more fields than any other Protestant thinker of the time.

The state of Melanchthon's collected works
Contributing to present-day ignorance of his work is the sorry condition of his collected works. In the nineteenth century the first twenty-eight volumes of the Corpus Reformatorum preserved his works (including nine volumes of correspondence) but used, by today's standards, somewhat questionable criteria for determining what to publish. Not only were some works missed completely (only partially accounted for in the five-volume Supplementa Melanchthoniana published but never completed in the early twentieth century), but many other titles were represented only in their final form. This makes it impossible for modern scholars to trace development and changes in Melanchthon's thought, as he sought to respond to shifts in the intellectual or political climate. Access to these sources illuminates an entirely new face of his thought. Such comparison demonstrates repeatedly that, unlike many of his contemporaries, Melanchthon often returned to his publications to refine, restructure, and rework his ideas.

Renaissance in Melanchthon Studies
We stand on the brink of a new era in Melanchthon studies. The completion of the first phase in the publication of his correspondence -- nine volumes of summaries and dating for all his letters (nearly 10,000!) -- and celebrations of the 500th anniversary of his birth in 1997 (which was followed, in 2010, by the commemoration of the 450th anniversary of his death) has once again put Melanchthon and his thought back on the sixteenth-century map for modern historians and theologians alike. What better way to capitalize on this interest than with this thorough record on microfiche of items still missing from recent collections of his works!

Why this collection?
*Melanchthon is one of the towering figures of Reformation and Renaissance.
*Modern editions of his works still contain important gaps. For example, his first commentary on St. Paul's epistle to the Romans and his first two works on rhetoric, bestsellers in the sixteenth century, are unavailable except in rare sixteenth-century printings.
*Modern editions also often offer only the last edition of a work, making it impossible to trace developments and changes in his thought. For example, the 1528 revisions to his commentary on Colossians contain expanded expositions of many important controversies, including a thoroughgoing refutation of Erasmus's political theory.
*Work on other aspects of Melanchthon's thought and life in recent years has piqued scholars' interest in this figure, making it a particularly propitious time to offer hitherto hard-to-get copies of his work.
*By including here his four-volume Opera omnia of the sixteenth century, scholars gain access to the only thorough index of his more familiar works.
*This project also contributes to the on-going work of preserving important sixteenth-century imprints found in important libraries and museums, in this case especially the Melanchtonhaus in Bretten.

Scope
This collection focuses on three types of literature in the Melanchthon corpus. First, it especially includes works not contained in more recent collections of Melanchthon's works (i.e., the Corpus Reformatorum, Supplementa Melanchthoniana, and Melanchthon Studien Ausgabe). Second, it preserves important earlier printings of works, which have been hitherto unavailable in modern sources, especially where these differ radically from later editions. Third, it contains a copy of the four-volume Opera omnia, both to indicate the materials available immediately after Melanchthon's death and to give readers access to the only index of his more well-known theological works. This collection of microfiche makes available for the first time to the widest possible range of scholars the work of an enormously influential teacher and thinker of the sixteenth century. It offers works otherwise inaccessible to scholars unable to travel to the handful of specialized libraries and museums. It thus increases dramatically the range of material scholars may use in their research and complements standard collections of Melanchthon's works in theological and research libraries.
Location of originals