The Reformation in Heidelberg Online 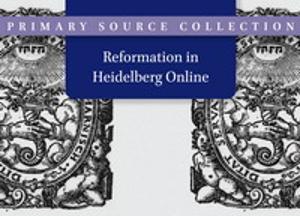 The Electoral Palatinate ( Kurpfalz) and its capital, Heidelberg, do not figure prominently in the early history of the Reformation. Nor was the Palatinate a notable religious force at the Diet of Augsburg in 1530. The Reformation came relatively late to Heidelberg: although Luther had debated there in 1518, with both Bucer and Brenz in attendance, Lutheran forms of worship were introduced only in 1546 when the hesitant elector Friedrich II yielded to the pleas of his nephew Duke Ottheinrich of Pfalz-Neuburg and to the demands of his people for reform. In the interim, however, Catholic forms of worship were re-instituted. Friedrich II died in 1556 and was succeeded by his nephew Ottheinrich, who proceeded somewhat less hesitantly to remove the 'papistische Abgoetterei'. Ottheinrich was a many-sided renaissance prince, who was as interested in alchemy and art as he was in Protestant theology. He favoured academic excellence over narrowly defined orthodoxy, and added lustre to his university with Protestant scholars of varying confessional stripes. The latent conflict between the parties had already broken out into a public row over Eucharistic practice before Ottheinrich's death.

The Lord's Supper controversy
When Friedrich III of the line of Pfalz-Simmern succeeded Ottheinrich in 1559, he was faced with a bitter dispute between the Gnesio-Lutheran, Tilemann Hesshus, general superintendent of the Heidelberg churches, and the Reformed partisan Wilhelm Klebitz. After both preachers continued to harangue each other's positions from the pulpit, Frederick opted to restore the peace by dismissing both Hesshus and Klebitz. This action received the blessing of the elderly Melanchthon, who bid all parties to put aside bickering and go no further than the biblical language in describing the Lord's Supper. Although it had not been Melanchthon's intention, his Iudicium on the Heidelberg Lord's Supper controversy played into the hands of the emerging Reformed party in Heidelberg led by Pierre Bouquin and Thomas Erastus.
The pivotal event proved to be a disputation that was held in Heidelberg regarding the Lord's Supper in 1560. Here Bouquin and Erastus convinced the elector, if not their Lutheran disputants, of the scriptural basis for their proposition that Christ was not physically present in the Lord's Supper. Frederick demonstrated this conviction when he won acceptance of the altered edition of the Augsburg Confession (the Variata) with its more open definition of the Lord's Supper as an acceptable interpretation of the Invariata at the Naumburg princes' assembly. For all Friedrich's adherence to the Variata and his attempt at Naumburg to maintain ties with Lutheran brethren, his choice of preachers and professors and his reconstruction of the church council moved the Palatinate ineluctably toward the Reformed faith

The first generation
The first generation of Reformed thinkers at Heidelberg is indicative of the eminence of the Palatinate, its university, and its intellectual achievement: Pierre Bouquin (d. 1582), Immanuel Tremellius (1510-1580), Thomas Erastus (1524-1583), Zacharias Ursinus (1534-1583), and Caspar Olevianus (1536-1587). After the resignation of Ursinus, the eminent Thomist-trained Girolamo Zanchi (1516-1590) occupied the chair of theology at the university. The effect of this concentration of Reformed thinkers in Heidelberg was manifold. First, it brought Heidelberg and the Palatinate into the Reformed fold, creating intellectual and spiritual ties with Geneva and Zurich - as evidenced by the theology of the Heidelberg Catechism (1563) - at a time when the political situation of the Holy Roman Empire did not permit overt confession of the Reformed faith. Under the terms of the Peace of Augsburg, the Palatinate, confessing the increasingly problematic Variata, was in the difficult position of being officially Lutheran and under consistent polemical attack from the Gnesio-Lutherans. Second, it created an intellectual centre in Heidelberg that more than rivalled the older Reformed centres of Geneva, Bern, and Zurich. Indeed, given the impact of Erastus' views on church and state and his important natural philosophical works, Ursinus' and Zanchius' systematic formulation, Olevianus' covenant thought, and Tremellius' biblical scholarship, Heidelberg was arguably more important to the development of international Reformed thought than the Geneva of Beza. Third, it offered a pattern of Reformed theology within the Empire, particularly evident in the production of theological works in the vernacular and in the translation of works, like Calvin's Institutes into German, that stood as a positive as well as polemical counterpoise both to Gnesio- and to Philippistic Lutheranism.

Tumultuous
The history of the Reformation in the Palatinate remained tumultuous after the establishment of the Heidelberg Catechism. A large influx of Netherlandish refugees contributed to the sense of international engagement on behalf of the Reformed confession. From 1568 onward Count Palatine Johann Casimir often led Palatine forces into battle in France and the Low Countries. Also from 1568, the Heidelberg church was shaken by a bitter dispute over church discipline, which pitted former Zwinglian and Calvinist allies against one another. The church was further rocked by the discovery of an Antitrinitarian cell among its clergy in 1570. Turmoil over the execution of Johannes Sylvan in 1572, the infamous flight and scandalous life of Adam Neuser in Istanbul, and accusations of heresy against Erastus and his associates plagued Heidelberg in the early 1570s. These controversies were only beginning to be settled when Frederick died in 1576. His heir Ludwig VI was Lutheran and eventually released the Reformed theologians. The territory became fully Lutheran again with the introduction of the Formula of Concord in 1580. The Reformed tradition of the Palatinate lived on in Johann Casimir's territory of Pfalz-Lautern. Many of the prominent Heidelberg academics moved to his new academy in Neustadt an der Haardt, and the prominent printer Matthaeus Harnisch set up shop there. When Ludwig died in 1583, Johann Casimir returned to Heidelberg as regent and reestablished the Reformed confession. Under Frederick IV and Frederick V, the Palatinate continued to play a leading role in imperial politics and in Reformed intellectual life. The heyday of the early Reformed movement came to an end with Frederick V's disastrous involvement in the Thirty Year's War. The consequences of the Winter King's gamble for the throne of Bohemia included demographic decline, political marginalization, and academic decline including the loss of the famed Bibliotheca Palatina.

This collection
This collection has been gathered for the purpose of illuminating the intellectual and religious developments during the reigns of Ottheinrich (1556-1559) and Frederick III (1559-1576). This collection is likely to be only the first instalment of a larger project that will continue to track Palatine developments into the early seventeenth century. The second instalment will fill lacunae in the present collection and make rare secondary works available. Future instalments will enlarge both the chronological and topical scope of the collection. Our primary goal has been to present the complete works of the major Heidelberg figures (Bouquin, Erastus, Olevianus, Ursinus, Zanchi) and a samples of the works of secondary figures (Johannes Brunner, Jacob Curio, Klebitz, Johannes Lange, Peter Lotichius Secundus, Wilhelm Roding, Sylvan, Daniel Toussain, Tremellius, Johann Willing, Hermann Witekind, Wilhelm Xylander). We have also included translations or editions of works of Beze, Calvin, Andreas Dudith, and Melanchthon that were significant in the Heidelberg context. We have favoured original editions to the extent that availability and microfilming considerations allow. Secondarily, we have sought to illuminate the theological development of the Palatinate including the origins and reception of the Heidelberg Catechism. Here we venture outside the strict bounds of Reformed Protestantism to include attacks on the Palatine confession by Lutheran scholars (e.g., works by Heshusius, Matthaeus Flacius Illyricus, and Paul Einhorn). We have also endeavoured to include a wide range of scientific, philosophical and literary works whose variety attests to the intellectual vitality of Reformed Heidelberg.

Secondary sources
The supplement dramatically enhances the first edition by adding a group of important, older secondary sources. Many of these are difficult to access, and it is hard - if not impossible - to find them all in the same library. However, they are essential to any study of the materials found in the collection's primary sources. Several of the works deserve to be highlighted.  Monumenta pietatis et literaria (Ludwig Mieg et al.) is a major early compilation of historical materials, including letters from the era and Alting's Historia ecclesii Palatinae - the earliest history of the Reformation in the Palatinate. Kluckhorn's collection of the letters of Friedrich III remains a necessary point of access to the politics of the Heidelberg Reformation.

Heinrich Heppe's Die confessionelle Entwicklung der altprotestantischen Kirche Deutschlands marks out the central concern of this influential scholar (known today for his Reformed Dogmatics project): it documents his highly influential understanding of German Reformed theology as a Melanchthonian middle ground between Calvinism and Lutheranism. In addition, Heppe's three-volume Dogmatik offers a broad sample of citations from the era. Gooszen's study of the text of the Heidelberg Catechism remains a standard examination of the early history of the document that modern scholars consistently take into consideration.

In short, in addition to rounding off the collection of essential primary sources on the Heidelberg Reformation, the second part offers a coordinated compilation of works that supply background and context for the collection of texts in the first series.
Location of originals