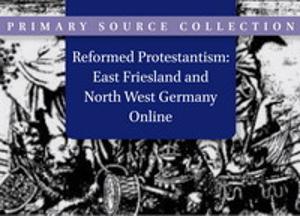 In the 16th century, the seaport town of Emden at the heart of East Friesland grew into the “mother church” of Dutch Calvinism, which was the driving force behind the Dutch Revolt. Concurrently, in neighbouring North-Western Germany the so-called “second Reformation” took place, that is, the calvinizing of Lutheran lands.

Emden
In the sixteenth century, the seaport town of Emden, at the heart of East Friesland, served as a safe haven for an increasing influx of religious refugees, representing all variant forms of Protestantism. These exiles, especially those from the Spanish dominated Low Countries, not only contributed substantially to the rapid demographic, political, and socio-economic expansion of the town, but also established Emden as the religious forefront in North-Western Europe. A Reformed consistory was established with full powers to govern the church. A printing industry was founded, flooding the market with Protestant books in Dutch, Low German, and English. Consulted for guidance in organizing the nascent Reformed Churches in Holland, Emden came to be the 'mother Church' of Dutch Calvinism, which was the driving force behind the Dutch Revolt. The Emden Synod of Dutch Churches of 1571 proved vital for the future of Dutch Calvinism by defining a doctrinal standard and a church order influenced by the French Reformed Churches. Confrontations between the Emdeners and the Lutheran Count Edward II resulted in Emden's religious autonomy and the monopoly of the Reformed Church in the town in 1595.

North-Western Germany
Simultaneously, in neighbouring North-Western Germany, the so-called 'second Reformation' took place, that is, the calvinization of Lutheran lands. From 1555 onwards, the Lutheran cities of Bremen and Hamburg became scenes of Sacramentarian controversies, which had an impact far beyond their borders. They marked a critical phase in the transition of German left-wing Lutherans to (a form of) Calvinism and in the consolidation of the Lutheran and Reformed confessions in North-Western Europe. Particularly Bremen with its 'Gymnasium Illustre' developed into a stronghold of the North German Reformed tradition under Martini, Crocius and Meier in the seventeenth century.

The current collection has been assembled for the purpose of illuminating these enormously influential intellectual, socio-political, and religious developments, and German-Dutch relations.

Scope
Drawing upon, in particular, the extraordinarily rich holdings of the Johannes a Lasco Library (Grosse Kirche) at Emden, the collection provides access to works that are not, or only very rarely, available in modern critical editions. It comprises both well-known and very rare works by all major and secondary theologians, historiographers, (clerical) administrators of the area (such as Menso Alting, Ubbo Emmius, Laski, Althusius, Hamelmann, Nicolai, Pezel, Pierius, Lampadius, and Martini), and by the chief antagonists in the eucharistic conflicts (e.g. Heshusius, Hardenberg, Hunnius, Timann, Westphal, Calvin, Mörlin), as well as examples of Emden reformation publications. The latter selection includes Gnapheus and Micronius, the first edition of the Deux-Aes Bible (1562), the Latin translation (1566) of the new shorter Emden catechism of 1554, the Protocol of the 1578 Emden Disputation with the Anabaptists, and translations of Bullinger and Sleidanus. Moreover, the collection makes available a very substantial amount of source compilations and historiographical standard books up to the end of the eighteenth century, such as those by Beninga, Bertram, Brenneysen, Eilshemius, Emmius, Funck, Gerdes, Harkenroht, Hase, Meiners, Ravinga, Reershemius, Schotanus, and Tiaden. The present catalogue is likely to be only the first instalment of a bigger project, for which the collections of other libraries will also be used.

Why this collection?
'The rise of rigid, militant "confessionalism" has commanded more attention than most topics among recent historians of later sixteenth-century religion, in relation to society and politics every bit as much as to theology.' (Euan Cameron). First of all, the present project will be an indispensable instrument for the widest possible group of historians engaged in research into this popular paradigm of confessionalization and its concomitants such as social discipline, poor relief, and rising urban republicanism. It will offer the necessary background for the interpretation of every kind of consistory, church, and public record in this field.

Whatever other undercurrents contributed to sixteenth-century confessionalization, Eucharistic controversy clearly played a crucial role. It was here that theological diversity crystallized. The collections will thus, finally, give readers access to an array of primary historical and theological sources of the consolidation of the confessions in early modern North-Western Europe.
Location of originals