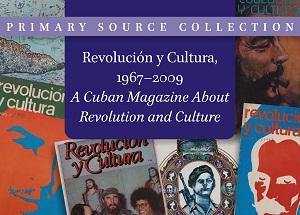 Revolución y Cultura is a fundamental and often unique resource for the study of more than half a century of Cuban culture. Founded as a biweekly in 1961 under the title  Pueblo y Cultura and continued in 1965 as the bilingual magazine  Revolution et/and Culture and as  RC in 1967,  Revolución y Cultura has published uninterruptedly since March 1972. From its foundation until 1977, when the Cuban Ministry of Culture was created, it appeared as the official organ of Cuba’s National Council of Culture. Since then it has been attached to the Ministry, without being its official organ. Some of Cuba’s most notable intellectuals have been among the journal’s editors and contributors, including several National Award winners, such as Lisandro Otero, Reynaldo González, Graziella Pogolotti, Ambrosio Fornet, Antón Arrufat, Leonardo Acosta, Jaime Sarusky, Leonardo Padura, and Senel Paz. As an illustrated cultural magazine with a wide thematic range, which for decades has attracted the best writers, photographers, designers and illustrators in the country,  Revolución y Cultura offers the most outstanding contributions in literature and the arts by both Cubans and foreigners. Until 1991, the journal published 84 pages and its frequency was monthly. From then on it became a bimonthly and finally a quarterly. From 2004 to 2019 it was published both in print and electronically. Since mid-2019,  Revolución y Cultura is  published online only.  Revolución y Cultura is listed in the UNESCO Portal of Culture of Latin America and the Caribbean.

Note: two predecessors of  Revolución y Cultura –  Pueblo y Cultura and  Revolution et/and Culture – were distributed free of charge among patrons of the National Council of Culture and among Cuban writers and artists. No complete collection of these earlier incarnations of the journal have survived; indeed, only few copies have been preserved in undamaged condition. This is why these predecessors of  Revolución y Cultura are not included in this collection. However, a complete run of  RC (1967–1971) is included.