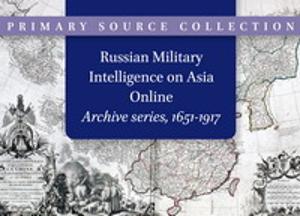 The 19th century was a time of rapid Russian expansion in Asia. While its western borders were largely fixed in the wake of the Napoleonic Wars, the Romanov autocracy still found many outlets for its imperial energies in the East. Imperial Russia’s Asian march coincided with a revolution in intelligence.

The Far Eastern Threat – Confronting China and Japan
While Imperial Russia never formally went to war with China, tsarist interest in its vast Far Eastern neighbor increased during the 19th century, as the decline of the Qing dynasty offered tempting opportunities for expansion. Furthermore, because of Russia’s long history of informal relations, its citizens were in a singularly favorable position to study regions of China that were entirely inaccessible to other Europeans. Brill’s Far Eastern Threat Collection comprises broader military, political, economic, ethnographic, and geographical studies, as well as valuable primary documents about the annexation of the Amur and Ussuri regions, the Ili Crisis, the Sino-Russian alliance, and concessions in Manchuria.

The Eastern Question – Confronting Turkey
During the last two centuries of its existence, the Russian Empire clashed with Turkey no less than eight times; one of these conflicts was the disastrous Crimean War. Known to Victorian England as 'The Eastern Question', these confrontations were a major feature of the era’s great power struggle. The Russian general staff gathered an enormous mass of data about its Ottoman adversary, which are grouped in the Eastern Question component of Brill’s Russian Military Intelligence collection. Comprising more than 1,000 separate files, the archive includes classified attaché and diplomatic reports on Turkish politics, British influence, the organization and condition of the Turkish army, the defenses of the Bosporus and the Dardanelles Straits, as well as nationalist revolts in the Balkans and elsewhere. There are also over 500 maps, plans, diagrams, and other illustrations.

The Great Game – Confronting Persia
The 18th and 19th centuries saw Russia go to war with Persia four times. While tsarist ambitions focused largely on the Caucasus, London came to fear grander designs in a rivalry for dominion over Asia that they dubbed 'the Great Game'. Brill’s Great Game collection includes close to 200 maps. The texts range from surveys of political, economic, and military developments, to Armenian separatism and Russian military assistance to the Persian army.

Classified
Because the collection was classified as either “Secret” or “For Internal Use Only,” and was published in only a small print run, there are no complete collections available abroad, and even the holdings of Russia’s leading libraries are often wanting. IDC’s Military Intelligence Collection therefore makes available for the first time this valuable resource to the scholarly community worldwide.
Location of originals