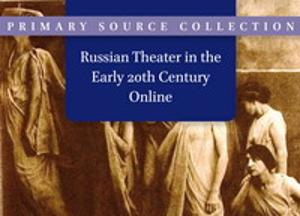 The collection of theater periodicals provides a detailed picture of metropolitan and provincial Russian theater, and reflects the cultural life in Russia at the turn of the 20th century. It is a unique source for a wide range of scholars in history, cultural studies, theater history and sociology, and provides a unique opportunity to savour the distinctive atmosphere of Russia’s Silver Age.

The early years of the 20th century saw the appearance of many new theaters in Russia, as well as an increase in theater audiences and in the activities of professional critics. Theater collectives and experimental theaters flourished throughout Russia, inventing new and highly individual expressive forms and bringing aesthetic elements of symbolism to the Russian stage. The leading role in these innovations belongs to Meierkhol'd who at that time directed his Theater-Studio on Povarskaya Street in Moscow and the Komissarzhevskaya Theater in St. Petersburg. Thanks to Meierkhol'd the repertoire policy of the imperial theaters of St. Petersburg changes radically. In Moscow the Studio is opened as part of the Moscow Art Theater (later becoming MKhT-2), as well as the Chamber Theatre and in St. Petersburg the futurists show their first theater experiments on stage. All of these theater collectives clearly expressed their own creativity and specific aesthetics.

The Russian symbolists published the journal Vesy ( The Scales, 1904-1909) and Zolotoye Runo ( The Golden Fleece, 1906-1909). These magazines looked at the problems of the 'new' theater as a reflection of Philosophical or mystical conceptions about life. These publications were succeeded by the monthly Apollon (1909-1917). Apollon reacted to the more important happenings on the scenes of the capital and provincial towns, but most pages was taken up by articles of an analytical nature, devoted to special problems of the theater: decorations, costumes, scenic movement/ plasticity, acting schools.

A specific position was taken in by the journal that was published in the Studio of Meierkhol'd: The Love for three oranges: the Journal of Doctor Dapertutto (Petrograd, 1914-1916). This journal published the cultural chronicles and reports of the acitivities of Meierkhol'ds Studio and also poems of contemporary poets. For three seasons (1912/1913 - 1914/1915) Moscow saw the publication of a 'monthly of theater art: Masks'. All magazines are characterized by excellent artistic content and feature contributions from leading writers, poets, literary and artistic critics, such as M. Voloshin, V. Meierkhol'd, V. Bryusov, L. Andreev, A. Blok, F. Sologub, M. Kuz'min, A. Akhmatova, N. Efros; and are illustrated by famous artists such as A. Benois, A. Korovin, K. Somov, A. Golovin and L. Bakst.

The importance of the Collection
The Collection includes small editions aimed at professionals and mass publications intended for a general audience. These periodicals provide a detailed picture of metropolitan and provincial Russian theater, and reflect cultural life in Russia at the turn of the 20th century. Their pages include theater repertoires, reviews, sharp-tongued articles, documentary materials, librettos, announcements and advertisements. The publications did not limit themselves simply to covering social issues, but also dealt with professional problems, such as the relationship between theaters and their sponsors, or the poor living conditions endured by provincial actors. This collection is a unique source for a wide range of scholars in the fields of history, cultural studies, theater history and sociology, and provides a unique opportunity to savour the distinctive atmosphere of the period revered as Russia's Silver Age.