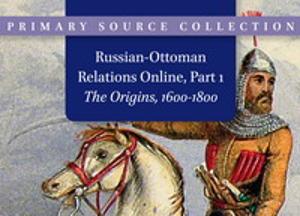 Brill presents a unique collection of rare primary sources on a vital and dynamic part of the history of Turkey, Russia, the Middle East and Western Europe. These sources provide detailed insights not only in the military ebb and flow of Russian-Ottoman relations, but also in their effects on European public opinion.

Part 1: The Origins, 1600-1800
By the seventeenth century, the Ottomans had extended their territorial dominance both deep into the Balkans and north of the Black Sea, where the Crimean Khanate acknowledged the Sultan's sovereignty. In this period, Russia became an increasingly important factor in European and Middle Eastern politics. The first Ottoman expedition against Russia took place in 1569. In the centuries that followed, the pace of conflicts and collisions increased dramatically. Between 1677 and 1681, there was Russian-Ottoman rivalry over the Ukraine. Four years later, the Tsar joined the Holy League in its war against the sultan, while in 1689 the Russians attacked the Crimea. Several treaties were concluded between these rival powers, such as the peace of 1700, in the wake of Karlowitz, and that of 1713, following the Ottomans' victory over the army of Tsar Peter I at the Battle of the Pruth two years earlier.

Relations between the Ottoman Empire and Russia were no less conflictual in the eighteenth century: They were at war in 1736-39, 1768-74, and 1787. In the infamous Treaty of Küçük Kaynarca of 1774, the Ottomans were forced to acknowledge the independence of the Crimea (under Russian influence) and of the northern coasts of the Black Sea. It was not until the Treaty of Jassy in 1792 that peaceful relations between the Ottomans and the Russians were restored.
Location of originals