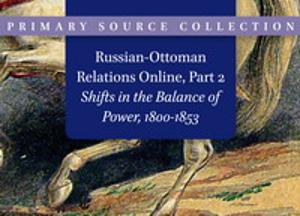 This collection includes discussions of diplomatic treaties like those of Bucharest of 1812 and Adrianople (Edirne) of 1829; the commercial and military issue of access to the Black Sea; eye-witness accounts from war theaters; and plans for, and ideas about, future confrontations. The fact that many different perspectives are represented in this collection makes it extra attractive.

Part 2: Shifts in the Balance of Power, 1800-1853
The issue of the protection of Orthodox Christians in the Ottoman Empire forms a clear link between the Treaty of Küçük Kaynarca and the Crimean War, which started in 1854. Ever since the earliest French-Ottoman diplomatic relations in the 16th century, France assumed the role of champion of Catholicism, claiming the right to intervene with the Ottoman government on behalf of both foreign and Ottoman Catholics. At the end of the 18th century Russia began to claim similar rights to protect the Orthodox subjects of the sultan. Contrary to popular belief these claims were not based on treaties, but on interpretations of dubious translations of the original texts.

Custody over the Church of Nativity in Bethlehem and the Church of the Holy Sepulchre in Jerusalem was the object of continuous disputes between the Orthodox and Catholic clergy in Palestine. The self-proclaimed diplomatic representatives of the parties, Russia and France were also involved in these conflicts. After both sides had turned to the sultan, he ruled in favor of the Catholics in 1853. The Tsar subsequently attempted to obtain a treaty allowing the Russians to intervene on the Orthodox' behalf whenever they considered it necessary. The sultan rejected the treaty, however, partly because of the objections of the British and French ambassadors in Istanbul. The Tsar subsequently marched his troops into the Ottoman principalities of Moldavia and Wallachia, using the sultan's inadequate resolution of the disputes in Palestine as a pretext.

This collection includes discussions of diplomatic treaties like those of Bucharest of 1812 and Adrianople (Edirne) of 1829; the commercial and military issue of access to the Black Sea; eye-witness accounts from war theaters; and plans for, and ideas about, future confrontations. The fact that many different perspectives are represented in this collection makes it extra attractive.
Location of originals

Library of Russia in St. Petersburg