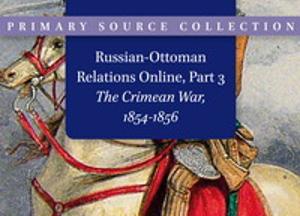 In this collection on the Crimean War, Russian views are represented by Anatole Demidov (1812-1870), traveler and patron of the arts; the discussion on the peace by former diplomat Tchihatchef; and the accounts of the Russian veteran, Piotr Andreevich Viazemsky (1792-1878). The opinions of two Turkish officers, Rustem Effendi and Seid Bey, and the views of Algerian poet Muhammad b. Ismail (1820-1870) are also included.

Part 3: The Crimean War 1854-1856
The Crimean War was fought between Russia on one side, and Britain, France and the Ottoman Empire, on the other. The principal battlefield was the Crimean peninsula in the BlackSea, but the ramifications were widespread.

In this collection Russian views are represented by such publications as no. 685 by Anatole Demidov (1812-1870), traveler and patron of the arts; the discussion on the peace by former diplomat Tchihatchef; and the accounts of the Russian veteran, Piotr Andreevich Viazemsky (1792-1878). The opinions of two Turkish officers, Rustem Effendi and Seid Bey, and the views on the Crimean War of the Algerian poet, Muhammad b. Ismail (1820-1870) are also included. On the British side the influential works of the virulently anti-Russian diplomat, David Urquhart (1805-1877), are well-represented, as well as more moderate publications.

Some of these sources were published anonymously at the time, or under pseudonyms. This happened in the case of, amongst others, Pictures from the Battlefields by "the roving Englishman". The author was the British journalist Eustace Clare Grenville Murray (1824-1881), the illegitimate son of Richard Grenville, 2nd Duke of Buckingham. Other works were published anonymously by William Martin Leake (1777-1860), the famous traveler, antiquarian and topographer, whose sympathies for the Greeks were widely shared among the British.
Location of originals