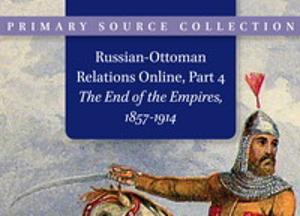 The material in the final part of this series is again highly diverse. Some works focus on trade, while others portray individual Ottoman or Russian statesmen. Some are personal accounts, whereas others are polemical or propagandistic. The collection is a veritable treasure trove of original sources, personal views, military analyses and national(istic) policy statements, which have never before been published together.

Part 4: The End of the Empires, 1857-1914
The position of the Ottoman Empire continued to decline during the second half of the nineteenth century. Succumbing to foreign pressure, the sultan had decreed far-reaching reforms in favor of his non-Muslim subjects in 1856. Less than two decades later the Ottoman Empire went bankrupt and had to allow foreign bankers to supervise its finances. The Ottomans found themselves increasingly marginalized in the debate on the Eastern Question of whether the Ottoman Empire should be preserved in some form or divided.

The material in the final part of this series is again highly diverse and multi-faceted. Some works focus on trade, while others portray individual Ottoman or Russian statesmen. Some are personal accounts, whereas others are polemical or propagandistic. The collection is a veritable treasure trove of original sources, personal views, military analyses and national(istic) policy statements, which have never before been published together.