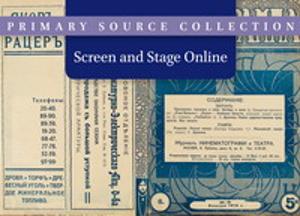 This unique collection of Russian theater and film periodicals, which also includes material on other forms of entertainment (cabaret theater, circus) and mass culture in pre-revolutionary Russia consists of various types of material ranging from sophisticated journals to cheaply produced magazines published in the last three decades of the Tsarist regime.

A wide range of information on various forms of mass culture and performance art in pre-revolutionary Russia:

The collection includes unique material such as records of the repertoires, biographies of the actors, examples of audience reactions to performances.

Urban Mass Culture at the Turn of the 20th Century
At the end of the 19th and the beginning of the 20th century, Russian urban culture was enriched by new leisure activities and entertainments. In addition to the existing fair booths for the commoners, popular festivities for the middle classes, and opera, ballet, and theater for the upper classes, other kinds of mass entertainment appeared, for example circus, sports contests, and horse races, along with cinema, cabaret, and theaters of miniatures, which became a new mass passion. The cabaret turned out to be a serious competition for the traditional theater. Since cabaret performances were accessible to the general public and their content was quite intelligible, they won audiences from the theater and attracted leading actors and other personnel.

Cinema
By this time the large wave of modernism swept across Europe and affected practically all aspects of life, including new public leisure activities and entertainments. Cinema turned out to be the perfect instrument to mold mass culture. Although the popularity of the screen was all pervasive, the universality of its artistic language was limited by the lack of sound. To compensate this, a number of means were used, varying from imitating and parodying films to combining film performances with ballet, theatrical, or musical sketches in one program. A skillfully staged effect of actual presence was also practiced, for example during the tour by Max Linder - the French 'king of the screen' - to Moscow, St. Petersburg and Kiev in December 1913. The intense drama of the film came to a sudden end when the main character made a live appearance, stunning and disconcerting the audience.

Cabaret and Variety Theaters
Cabaret and variety theaters appeared in Russia in the 1900s, and provided an ideal setting for artistic experiments. At the end of February 1908, the Bat cabaret theater (Letuchaia Mysh') opened in Moscow under the direction of Nikita Baliev; six months later, The Distorting Mirror (Krivoe zerkalo) parody-theater founded by Aleander Kugel' and Nikolai Evreinov opened its doors. These experiments were such a success that they immediately became the fashion. Soon, dozens of similar ventures appeared not only in Moscow and St. Petersburg, but also in Odessa, Kiev, Khar'kov, Baku, Rostov-on-Don, Vladivostok, and many other cities. In 1912, there were 125 cabaret or variety theaters performing original sketches and programs every evening in Moscow and St. Petersburg alone. Cabaret mania swept through both literary and artistic circles. Suffice it to mention such famous cabarets of Moscow futurists as Stray dog (Brodiachaia sobaka) and The Pink Lantern (Rozovyi fonar'). The symbolist poet Fyodor Sologub intended to open his literary cabaret. Mikhail Kuzmin and Vladislav Khodasevich enjoyed writing musical and theatrical items for cabaret programs. Vasilii Kachalov, Ivan Moskvin, Ol'ga Knipper-Chekhova, and even Konstantin Stanislavskii himself did not mind appearing on the stage of Baliev's theater. Although cabaret culture in Russia remained formally close to its original European concept, it had its own roots. Its stylistic and artistic originality was influenced by the living traditions of intimate gatherings of actors, named kapustniks - literally 'cabbage pies', where the actors parodied the highbrow stage practices of the Malyi, Aleksandrinskii, Mariinskii, and Moscow Art theaters.

Mass Media on Popular Entertainment
Starting at the beginning of the 1900s, a large number of daily and weekly illustrated newspapers and journals were published in capitals and provincial cities throughout the Russian Empire. These publications contained the main news related to operetta, farce, variety shows, circus, sports and other forms of entertainment, and provided insights into various occupations related to acting. When cinema and cabaret spread more widely, news about them was included in these periodicals, thus diversifying them even further.

Several professional publications (e.g., Actor ( Artist) and Actor's Diary ( Dnevnik Artista)) already appeared at the end of the 19th century. They reflected a complex panorama of theater life in the main cities and in the provinces, and carefully recorded all significant premieres, current repertoires, artistic stage tours, innovations, the actions of censors and local authorities, the switching of actors to another stage, etc. Like cinematographic periodicals (e.g., Elektra - the one-off newspaper for cinema, theater, arts, and literature aficionados that appeared in Moscow in 1909), practically all these titles were short-lived. Hardly any of them survived more than a few seasons, and even the most successful lasted only until the new performing arts in the old Russia came to an end. Worth mentioning are Artistic world. Journal for variety theaters, circus, sports and cinematography ( Artisticheskii mir. Zhurnal teatrov-var'ete, tsirka, sporta i sinematografa) (Moscow, 1912-1918), Review of St. Petersburg cinemas, skating rinks, and theaters ( Obozrenie SPB. kinematografov, sketing-ringov i teatrov) (St. Petersburg, 1912-1917), and Theater and cinema. Weekly illustrated publication ( Teatr i kino. Ezhenedel'noe illiustrirovannoe izdanie) (Odessa, 1915-1919).

Historical Value of the Publications
The historical value of these publications can hardly be overestimated. The researcher will find in them unique and still poorly explored material, including records of the repertoires of cabaret theaters and their evolution, as well as the history of various one-man theatrical undertakings and the biographies of the participants. They also contain examples of audience reactions to cabaret performances. Cinema historians will also profit from this valuable material. The publications will help them to define the functional role of cinema in cabaret practice, to establish the similarities and differences, and to better understand various aspects of the evolutionary esthetic convergence of theater and cinema, and analyze their mutual influence.
Location of originals