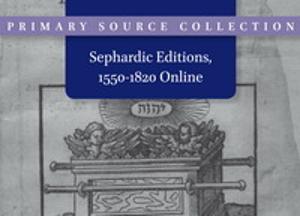 Meyer Kayserling's Biblioteca española-portugueza-judaica (1890) is a hallmark of Iberian and Jewish bibliography. It reveals the importance, richness, and variety of the culture produced by the Jews of Spain and Portugal, both the exiles of 1492 and the many converted Jews - the "New Christians" or "conversos" - who returned to Judaism between the sixteenth and the eighteenth centuries.

Library of Jewish heritage
The present selection reflects the impressive cultural achievements of these 'New Jews' and former conversos, who are also called Western Sephardim. In communities such as Ferrara, Amsterdam, Hamburg, London, and Bayonne, these Iberians - who had been raised as Catholics, and were largely unaware of Hebrew and formal Judaism - reconnected with their ancestral faith through the creation of an authentic library of Jewish heritage in the Spanish and the Portuguese language.

Modern Jews
Numerous Bibles, prayer books, and a whole range of works on the essentials of Judaism and the duties of a Jew were published in the vernacular. However, book-printing was not limited to re-education in Judaism alone; many of the works written or printed by the former conversos also reflect the broad cultural interest, and the academic background, they had brought with them from Spain and Portugal. Precisely the encounter between Iberian Renaissance culture and the rediscovered Judaism in environments such as the cosmopolitan, tolerant city of Amsterdam, turned these Western Sephardim into the first 'modern Jews', as is exemplified by the life and works of such eminent figures as Uriel da Costa, Menasseh ben Israel and Joseph Penso de la Vega.

Most influential works
This selection comprises the most influential works written or printed by the Iberian Jews in the major centers of the Western Sephardi Diaspora (e.g., the Netherlands, France, Italy, Germany, England); it includes all genres and reflects both their religious and their secular culture. Many of the editions included in Meyer Kayserling's bibliography are exceedingly rare and are available only in specialized collections of Judaica. The aim of the present selection is to make the Sephardi heritage generally available in order to meet the needs of modern scholarship.