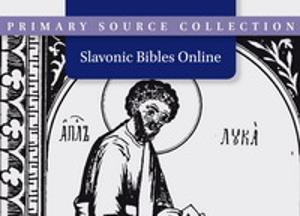 Collection of the earliest part of the Slavonic early printed books of the Moscow University Library, consisting of 40 Slavonic bibles and Cyrillic religious books printed in the 15th and 16th centuries, including editions of the Gospels, New Testaments, Acts and Epistles, and Psalms.

The Moscow University Library
The Moscow University Library, which currently houses more than eight million volumes, was founded in 1756 and was thus the first university library in Russia. The most valuable part of its holdings belongs to the Department of Rare Books and Manuscripts, whose collection comprises more than 200,000 items. These include unique and extremely rare European, Oriental, Slavonic and Russian manuscripts, archives, incunabula, early prints and printing ephemera. Here are to be found the first Slavonic Cyrillic printed books - the Book of Hours and two Treodions, printed by Schweipolt Feol in Krakow. The Lent Treodion contains a splendid bookplate from the Moscow Printing Office (Moskovskii Pechtanyi Dvor).

Unique collection
The University Library's unique collection of Slavonic early printed books was formed largely through donations, purchases and transfers from other libraries. Especially important to the acquisitions was the Archeographical Expedition, which involved thirty years working among Russian Old Believers in different regions of the former Soviet Union and which resulted in a doubling of the collection. Today, the Slavonic collection includes 2,170 items dating from the fifteenth to the early twentieth century.

History of printing
The Bibles and religious books illustrate a fascinating chapter in the history of printing. Not only was printing itself a work of art, but the Bibles were further enhanced by painters who designed the title page and illustrated the text. Most of the books were printed in Moscow and in the Polish and Lithuanian lands of modern Ukraine and Byelorussia. There are considerable differences between Moscow editions and those from Ukraine or Byelorussia: while the Moscow editions were funded by the government and rigidly controlled by the Metropolitan and the Tsar, printing in the Ukraine and Byelorussia was supported primarily by private donations. The latter therefore frequently contain coats of arms, dedications and author's prefaces. Their repertoire was also much more diverse.

In the latter half of the sixteenth century, Moscow, L'vov, Ostrog and Vil'no emerged as important centres of Slavonic book printing. The Gospels and Book of Psalms printed in the Moscow Anonymous typography (c.1550-1560) and the Acts printed by Ivan Fedorov and Petr Mstislavets in 1564, (being the first printed books in Moscow) are masterpieces of the art of printing. The traditions of the first Moscow printing houses were continued by Andronik Nevezha. In 1577, he published the Book of Psalms on the printing press of Aleksandrova Sloboda - the capital of Ivan the Terrible's oprichnina. Later, in Moscow, Nevezha printed the Lent Treodion (1589), Oktoikh (1594), and many other books.

History of language
The Bibles and Bible translations provide an absolutely unique source for the study of the history of language. They give us a clear picture of the level of development of the Slavonic languages in the fifteenth and sixteenth centuries. Above all, they testify to the superb achievement of individual editors and translators. The University's collection contains the first printed edition of the Slavonic Bible, the work of the famous Byelorussian printer, scientist, and educator Franciscus Skorina. The full text of the Bible was to appear in instalments; the project, however, was never completed. The University Library houses the Books of Joshua, Ruth, Judges and Kings, published in Prague in 1518-1519. Skorina himself had translated these texts, intended primarily for teaching reading skills, into the Byelorussian version of the Old Church Slavonic. These remarkable editions contain the author's prefaces, epilogues, and comments. Franciscus Skorina was also the first to use title pages, foliation, running titles, and elaborate illustrations in Cyrillic printing. The beautiful artistic and paleographic design makes these books an outstanding landmark of Cyrillic printing.

First printed Slavonic text of the complete Bible
The catalogue includes books produced in the Polish lands and the Ukraine by the first Moscow printer Ivan Fedorov. These are the New Testament with Commentary (Zabludovo, 1569), Acts (L'vov, 1574), and the first printed Slavonic text of the complete Bible (Ostrog, 1581). The edition of the New Testament and the Book of Psalms (Ostrog, 1580) is particularly interesting. Numerous notes, comments, marks, corrections and insertions suggest that this book, the property of the clerk (pod==aichii) Ivan Grigoriev, had been the editor's copy. The book also contains four miniatures of the Evangelists. Another book, A Little Book Comprising Most Necessary Things ( Knizhitsa sobranie veshchei nuzhneishikh) compiled by Timofei Mikhailov and published in Ostrog in 1580, was an index to the New Testament and Book of Psalms, a first edition of its sort.

The catalogue also contains production details of another Ostrog typography in use prior to 1612. The most interesting editions are the anti-Jesuit and anti-Uniat polemic writings - Apocrisis (c. 1597) and Book in Ten Chapters (1598).

Valuable historic information
In 1570, Petr Mstislavets, Ivan Fedorov's associate, re-established Cyrillic printing in Vilno where it had been at a standstill after Franciscus Skorina. Mstislavets' new printing press was in the house of his benefactors the family Momanchi, merchants living in Vilno. The New Testament (1575) and the Book of Psalms (1576) were products of this typography. The production of the Mamonichi typography, as well as that of the Slavic printing presses of Nesvizh, Venice, Skutri, etc., is represented in the catalogue. Notes, markings and inscriptions in the books provide valuable historical information.
Location of originals