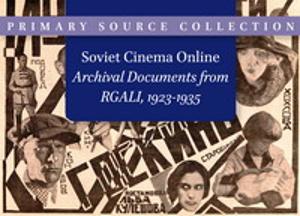 The documents in this collection cover the period when state monopoly control over the Soviet cinema industry - production, distribution and exhibition - was being established and this is why they cover a number of different organizations and institutions.

The film industry in Soviet Russia experienced a formative period in the 1920s and 1930s, when its rapid growth and mastery of talking pictures attracted authorities' attention to the unique industry's potential as a powerful ideological tool. VFKO (the All-Russian Film Department of Narkompros) led the newly-nationalized film industry in 1919, and was replaced by Goskino in 1922 and Sovkino in 1924. Sovkino helped strengthen ideological control over filmmaking by introducing censorship of screenplays and instituting rules for film reviews in central media. Sovkino was also given a monopoly on importing foreign films to the USSR.

Despite the Party's efforts to force filmmakers into a Bolshevik, proletarian mold, during NEP the government was unable to single-handedly finance all film production and distribution. State film organizations were forced to continually maneuver between ideology and the market. In 1928-1929, the country began transitioning from NEP-style liberalism to a hard-line, totalitarian system of social relations, which radically changed the system for managing the film industry. A number of resolutions were passed to shut down entertainment films and expand the production of propaganda films. The USSR Kinokomitet was established in 1929 and later reorganized as Soiuzkino. Sovkino ceased to exist in 1930 and its functions were transferred to the new agency. Soiuzkino was put in charge of studios, distribution centers, part of the cinema circuit, factories, the fotokhimtresty, etc. Cinematography was becoming the most controlled of the arts.
Russian State Archive of Literature and Art (RGALI)