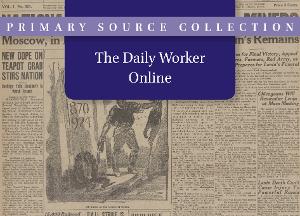 The Daily Worker was the official mouthpiece of the Communist Party of the United States of America (CPUSA) between 1924 and 1958. While performing this function, the newspaper represented nevertheless much more than just a tool of political propaganda. Originally, its articles and campaigns were intended to raise working-class awareness in the US and to promote the tenets of socialism there. However, gradually, The Daily Worker started to appeal to a broader audience, not just rank-and-file Communists. Its main target became the victims of the Great Depression, the masses of the unemployed, the dispossessed, and the marginalized minorities packing American metropolises. Its reports covered a wide range of subjects, from policy reforms to labor strikes, from civil rights to housing and urban planning, from foreign policy to sports, literature, and general culture.

The Daily Worker – with its weekly editions The Sunday Worker and The Worker – was the main press organ of the Communist Party of the United States of America (CPUSA).[1] It was published between 1924 and 1958 and, at its peak, had a circulation of more than 30,000 copies. In spite of being closely tied to the CPUSA, The Daily Worker’s role did not exclusively involve mere propaganda. Its scope was indeed broader, as it aimed to educate its readers politically by explaining the fundamental tenets of modern radical (counter)cultures, by strengthening American working-class consciousness, and by nurturing and giving expression to popular demands for social reforms and change.[2]

The birth and evolution of The Daily Worker is therefore very much intertwined with the historical, parabolic development of socialism in the US, which emerged in the first decades of the twentieth century, reached its apex in the 1930s, and rapidly declined with the advent of the Cold War.[3] As Michael Kazin has argued, three different traditions converged to shape American socialism: the populist tradition, which especially in the Great Plains had sustained the reformative efforts of tenant farmers and skilled workers; the Jewish tradition, which gave voice to masses of immigrants and garment workers in the main cities, and at the same time introduced elements of communalism and solidarity into the American socio-political landscape; and finally the urban or “modernist” tradition, which criticized American metropolises’ structural inequality and offered an alternative view of progress and development expressed through a variety of cultural outlets.[4] More than just mirroring the CPUSA’s official stances, thus, The Daily Worker’s editors and contributors tried to harmonize these three different strands. The outcome, in hindsight, was a newspaper that spoke to a broad American left and that made out of social inclusion, equality, and reforms its flagship campaigns.

In its early years, The Daily Worker was mostly concerned with the amplification and trans-nationalization of the global communist movement. The USSR was represented as the new beacon of freedom and hope for mankind. Soviet life, economic performances, and formal egalitarianism were celebrated almost uncritically. Race, class, gender, and religious privileges were portrayed as structural vices of the imperialist system that Communism promised to replace. For this reason, throughout the mid- and late 1920s, The Daily Worker rhetorically appealed to a transnational sense of belonging, solidarity, and commonality of interests that should have spurred the working class’ global struggle.[5] In 1926, for instance, it endorsed Mexican president Plutarco Elías Calles’ policy against the Catholic Church’s overwhelming power and influence in Mexico’s domestic affairs and praised his attempt to secularize both the Mexican state and society.[6] Similarly, the newspaper’s editors appealed to the workers of the whole American continent, from Canada to Argentina, to unite against any form of imperial aggression, mostly embodied, in their views, by the unbounded power of Wall Street financial speculators.[7] Labor struggles and protests were conceived as American workers’ main tools to reorder an inherently unfair system. Consequently, the newspaper gave ample publicity to the waves of strikes that hit the US textile, building, coal, automobile, and railroad industries in those years.[8]

It was in the 1930s, however, that the newspaper’s popularity soared, in parallel with the CPUSA’s membership. This was due mostly to the rise of the so-called Popular Front culture, which, in the wake of the Great Depression, won the hearts and minds of thousands of Americans. The Daily Worker covered the Dust Bowl and the excruciating breadlines and hunger marches that were sweeping the country. Calling for citizens’ direct action and mobilization, it started advocating for social security, affordable housing, and labor regulations, thus contributing to setting the tone for the national debate.[9] “Under the slogan 'Communism Is Twentieth-Century Americanism,'" as Robert Shulman has explained, “the discourse of the Popular Front” – which The Daily Worker consistently offered to its readers – “stressed the importance of the common man, of the ordinary worker and farmer, of the immigrant, African American and Native American.”[10] In substance, the emphasis on the necessary empowerment and liberation of the many exploited minorities constituting American society transformed The Daily Worker from a partisan, militant press organ into a fairly popular publication.

Such a change came at a price. The newspaper, indeed, by broadening its audience and committing itself to progressive reforms, was diluting its communist orthodoxy. The deviation from the traditional canon of Marxism and Leninism was not only a matter of doctrinal discussion: It created a split within the journal. Disagreements over the extent to which radical and revolutionary principles could and should appeal to the masses emerged among the authors. So, whereas for instance the correspondents and reporters from New York City, the Popular Front’s ultimate bastion, praised the establishment of broader alliances, networks, and coalitions, more traditionalist authors sharply criticized the degeneration of revolutionary principles into a corrupted, bourgeois, mainstream mass culture. In the end, the position of the CPUSA’s leader, Earl Browder, prevailed, and The Daily Worker became one of the most authoritative voices within the American Popular Front, hosting authors and artists such as Mike Gold, Woody Guthrie (he had his own “Woody Sez” section), Martha Graham, and many others.[11]

One issue, however, unified The Daily Worker’s editorial board: civil rights. Throughout the 1930s, The Daily Worker’s contributors lent their support to anti-lynching legislation, denounced segregation and Jim Crow laws in the American South, and condemned racial violence and intimidation against black communities. The Daily Worker further raised public awareness of such cases of racial injustice as the Scottsboro Boys and the Angelo Herndon trial; it promoted the work of the International Labor Defense and the American Negro Labor Congress; it acted as a sounding-board for the strengthening of an African-American identity, as in the case of Marcus Garvey’s “Back-to-Africa” movement; and it exposed the dire housing conditions in Harlem.[12] Most famously, The Daily Worker actively campaigned for desegregating professional sports in the United States. The well-known sports page editor, Lester Rodney, regularly reported on the accomplishments of African-American athletes, such as Joe Louis and Jesse Owens, and convinced the newspaper to officially sponsor a basketball team made up of Harlem’s top high school players.[13]

Toward the end of the 1930s, the newspaper was confronted with the rise and consolidation of fascism in Europe. The Spanish Civil War and the deeds of the International Brigades convinced the editors to increasingly turn their attention to global affairs. Whereas the non-aggression pact between Germany and the USSR was barely criticized, after 1941 Nazi-Fascism became the newspaper’s archenemy. World War II was depicted as an epic struggle that both democratic and socialist regimes were fighting against the obscurantist forces of racism, imperialism, and militarism. The siege of Leningrad and the battle of Stalingrad, for instance, received ample coverage, and the heroism of the Soviet troops and civilian population was constantly emphasized.[14] But the war alliance that The Daily Worker was supporting so fervently soon proved to be artificial and incidental: the common line that Churchill, Roosevelt, and Stalin had drawn together at the Tehran conference in 1943 vanished in the aftermath of the war. America’s views of the role of communism in the building of a postwar order changed completely; Stalin’s sheer stubbornness helped creating a climate of mistrust, suspect, and growing tension.

All of this reverberated in the American communist movement as well, and one of the first victims of this new confrontation was the CPUSA’s longtime leader, Earl Browder. Browder had supported the idea that world stability and peace depended on mutual recognition of interests and coexistence between socialism and capitalism. This stance, which had for many years substantiated the Popular Front’s political views and platforms, rapidly became “revisionism” or “opportunism” in the eyes of American rank-and-file Communists. Browder was expelled from the CPUSA and replaced by the much more closely aligned and orthodox former unionist William Z. Foster.[15] At the same time, this change of leadership within the CPUSA signaled a deep transformation of The Daily Worker’s editorial line and perspective. The newspaper started labelling Truman’s policies as reactionary and conservative, while containment, NATO, and the Marshall Plan were all seen as unscrupulous, aggressive, and hazardous moves.[16]

The Daily Worker’s confrontational attitude, which the newspaper maintained even when Khrushchev denounced Lenin’s thesis of the inevitability of inter-imperialist wars and condemned the dark sides of Stalin’s reign of terror, was exacerbated by the rising anti-Communist sentiment overtaking 1950s America.[17] McCarthyism and the widespread red-baiting campaign decried  American Communists and fellow travelers as a domestic threat, a fifth column whose efforts were orchestrated by Moscow to destabilize American democracy. The newspaper continued to lose subscriptions, and its editors and authors were monitored by the FBI and put at the margins of American society. Even mere reporting on relevant events became too difficult, and the newspaper was eventually forced to close its offices at the beginning of 1958.[18] After a brief suspension of activities, the CPUSA published a weekend paper called The Worker from 1958 to 1968.

Notwithstanding its rapid decline and eventual disappearance, The Daily Worker played an important role in the history of the American left. Its campaigns and advocacy helped to raise awareness on issues that gradually broke out of the radical realm and eventually entered mainstream public debate. Its analyses and reports amplified the reformative messages animating the Popular Front cultural milieu. In addition, The Daily Worker’s pages represent a unique prism through which to assess the breakthroughs and setbacks of the early transnational communist movement. The breadth of this collection, thus, goes well beyond American history, as The Daily Worker articles provide relevant insights into some of the most intense and intriguing intellectual debates, cultural crossings, political struggles, and social activities of the twentieth century.

[1] The Daily Worker was first published in Chicago in 1924 and then, in 1927, its offices moved to New York City. It started as the daily successor of The Worker, a weekly magazine that combined the mostly local and rather orthodox socialist views provided by the Cleveland-based Toiler with the maximalist and internationally oriented positions offered by the Workers Council. Hence, the US Daily Worker is not to be confused with the British Daily Worker, which ultimately became the Morning Star in 1966.

[8] On this, see the University of Washington website “Mapping American Social movements Through the 20th Century,” and especially the page “Unemployed Protests 1930s,” at http://depts.washington.edu/moves/unemployed_map.shtml, accessed on 30 January 2019. See also Walter T. Howard, “The National Miners Union: Communists and Miners in the Pennsylvania Anthracite, 1928-1931,” The Pennsylvania Magazine of History and Biography, Vol. 125, No. 1/2 (2001), 91-124.

[11] Michael Denning, The Cultural Front: The Laboring of American Culture in the Twentieth Century (London: Verso, 1997), 16.

[13] Mark Naison, Communists in Harlem during the Depression (Urbana-Champaign: University of Illinois Press, 2005), 214.