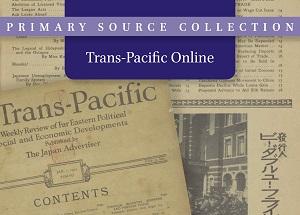 Launched in Tokyo in 1919 as the flagship of the Japan-America Association by Benjamin Fleisher (1870-1946), publisher of the Japan Advertiser, the Trans-Pacific began with a mission to stimulate US-Japan amity. Published monthly, then weekly, and sharing editorial and corporate resources with the Japan Advertiser, the Trans-Pacific soon became that newspaper’s de facto weekly edition, serving up a heady mix of political, cultural and commercial news to forward-looking Japanese and western readerships. A victim of its own success, the Trans-Pacific was bought out by the Japan Times in December 1940, ending its brief but distinguished career in uneasy partnership with the Japan Times Weekly.

Published from Tokyo from September 1919 to November 1940 as the monthly then weekly edition of the American-owned English-language daily, the Japan Advertiser, the Trans-Pacific was initially a hands-across-the-ocean project for the Advertiser publisher, B.W. Fleisher's America-Japan Society, published with sections in Chinese and Japanese.

Published monthly from September 1919 to March 1923, then weekly from May 1923 until November 7th 1940, the Trans-Pacific evolved from its initial purpose of Japanese-American amity to a mixture of US and Japanese commercial news and political reporting.

The Trans-Pacific had a rocky history. It was suspended in April-May 1923 for commercial reasons, then from four months from the September 1923 earthquake, reviving in January 1924. Financial problems then prevented publication from October 30 to May 7 1931, when a consortium, of American and Japanese interests came to its rescue. In November 1940 the Trans-Pacific was acquired by the Japan Times along with its parent newspaper, the Japan Advertiser, at what Fleisher later referred to as 'a blackmail price' - US$100,000, one quarter the price paid by the Japan Times, bankrolled by the Ministry of Foreign Affairs, (Gaimushō), for the Japan Chronicle.

Note: Brill now offers this virtually complete run as a single title Primary Source Online. As missing issues emerge, they will be included in this Primary Source at no extra cost to purchasers.