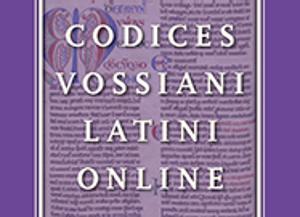 The Codices Vossiani Latini Online publishes all 363 codices which form the world-famous Latin part of Vossius’ manuscript collection held at Leiden University Library. The Codices Vossiani Latini count a large number of early medieval manuscripts (a whopping 76 Carolingian manuscripts dating from before 900), including major sources of many classic texts. The 363 codices in all comprise 40,278 openings, resulting in 84,266 images, including covers and flyleaves.

Under the Contents TAB you will find three links.

The Manuscript link will lead you to images of that particular manuscript. The images offer an exact copy of the manuscript held at Leiden University Library, and include all spines, covers, and flyleaves.

The Summarized description in English link will lead you to key information on that particular manuscript, taken from the catalog of the Codices Vossiani Latini, published in four parts by K.A. De Meyier in 1973, 1975, 1977 and 1984 (with P.F.J. Obbema) respectively,

The following steps have been taken in order to improve the accuracy and currency of the information provided.

The Description in De Meyier Catalog link will lead you to the description of the particular manuscript by De Meyier in his catalog mentioned above.